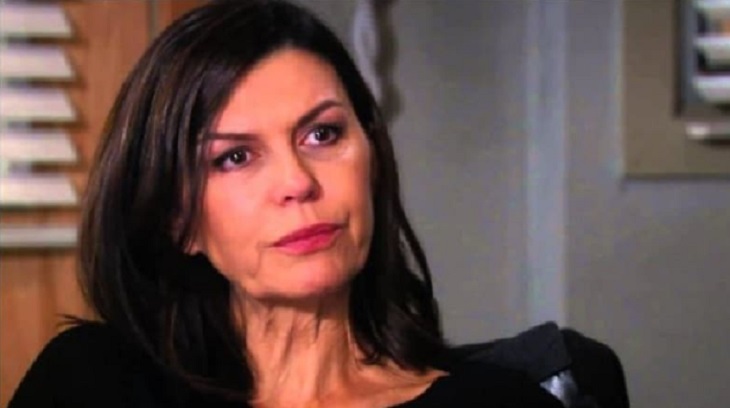 Commissioner Jordan Ashford (Briana Nicole Henry) talks to Mayor Laura Collins (Genie Francis) in an office in the same building as the Port Charles Police Department about a deal that the two of them had previously discussed. The police commissioner asks the mayor if she thinks that someone else could have possibly taken the deal.

This could have something to do with the Cassandra Pierce (Jessica Tuck) case, considering that she just escaped and is suspected of kidnapping Laura’s granddaughter, Charlotte Cassadine (Scarlett Fernandez) has suddenly gone missing from Kelly’s, and the two women had just been in the Port Charles Police Department discussing Charlotte’s disappearance and Cassandra’s escape.

At Anna Devane’s (Finola Hughes) house, where Dr. Hamilton Finn (Michael Easton) has been living for the past several months, Hayden Barnes (Rebecca Budig) is positively beaming as she tells Finn that she’s dreamed of hearing him say that! Has Finn realized he’s still in love with Hayden and let it slip, or is he just talking about wanting to be part of Violet Finn’s (Jophielle Love ) life and Hayden is hearing what she wants to hear?

Little does he know that Anna has just gotten back in town and is busy down at the pier where she stumbled across Cassandra Pierce who has kidnapped Charlotte Cassadine! In Monday’s episode, it looked like Hayden and Finn may spend the night together in Anna’s house since Finn put Violet to bed in the guest room!

At the Port Charles Police Department, where Maxie Jones (Kirsten Storms) and a frantic Lulu Spencer (Emme Rylan) await word on the missing Charlotte Cassadine, Peter August (Wes Ramsey) arrives. He hears something the two are discussing and announces he doesn’t believe it and won’t buy it for a second! It’s possible he is referring to Lulu in a panic who may be worried that she’ll never see her young daughter again! Meanwhile, viewers will recall from Monday’s episode that Cassandra has blackmailed Valentin Cassadine (James Patrick Stuart) into doing something in exchange for letting Charlotte go; Valentin shouldn’t have bought that!

At Jasper “Jax” Jacks’ house, he opens the door to Carly Corinthos (Laura Wright). He tells her he is glad she came back and that he has a lot to tell her. Other General Hospital spoilers say that Jax makes a deal with Carly, and as General Hospital viewers know, he is extremely upset over the earlier visit of Jason Morgan, (Steve Burton) Carly’s bestie, who was asking WAY too many questions about Jax’ connection to Cassandra Pierce! Jax may need to let some steam out and bring someone he trusts with secrets (Carly? Keep secrets?

Yeah, RIGHT!) to confide in about the Nikolas Cassadine (Marcus Coloma) mess he’s gotten himself into. He may not tell her that Nikolas sprung Cassandra, but he might explain that he is alive and staying at his house and is trying to “stay dead” until he can bring Valentin down and regain his fortune!

Meanwhile, Jason has left Jax’s house and gone to Wyndemere, where he has questions about Cassandra for him. Jason probably doesn’t know about Charlotte’s kidnapping but Valentin will be sure to bring him up to date about that, and might be in the perfect mood to spill some real dirt on Cassandra to Jason! The more people looking for Cassandra, the more who might bring Charlotte to safety, and Jason’s a great one to be in the know!

As General Hospital viewers will recall from Monday’s episode, Anna has just gotten back into town and arrived at the pier where she stumbled onto Cassandra with Charlotte. Cassandra was threatening Charlotte after she kicked her and had tried to get away, and Anna arrived just in time to hear the threat! Charlotte recognized Anna after a couple of seconds and looked relieved. Anna tries to make a deal with Cassandra to allow her to walk away if she lets Charlotte go!