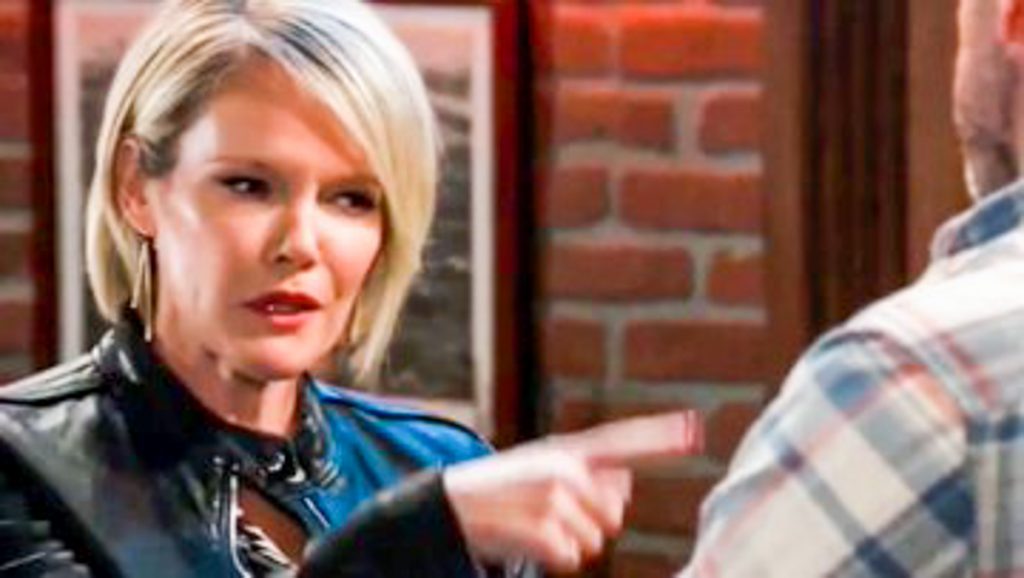 General Hospital spoilers tease that Ava Jerome (Maura West) will be very angry with someone or something and storm out from somewhere soon on GH!

The person who is likely to make Ava Jerome the angriest right now is Ryan Chamberlain (Jon Lindstrom)! Ava has tried to get the message through to him that she no longer wants to be with him and to stop sending her love letters! She even returned them to him by dumping them on the ledge of the area in Pentonville Prison where the “red phones” are where visitors talk to inmates!

Still, Ryan had a copy of the Ava-centric Crimson Magazine and stuck it, or at least the cover of it on his wall in his cell, and later Detective Harrison Chase, (Josh Swickard) investigating an act of violence on Ryan’s part within Pentonville Prison, confiscated it, causing Ryan to try to attack him through the bars of his cell! Ava just had returned to work at her art gallery after many, many months; did she arrive to find it filled with more letters from Ryan? That definitely would make her storm out of the gallery and get rid of the offending items as soon as possible!

Ava is healing somewhat from Ryan’s effects on her and her life, and it is healthy for her to move from fear and guilt to anger! Ava has every right to be angry at someone who claimed to love her and worship her as his goddess only to be murdering her daughter and then coming in her bed and spending their first night of passion coming immediately from the kill! It would be best if Ava didn’t take mail back to the prison and to Ryan in person – she should just mark return to sender on the unopened letters and refuse them, otherwise Ryan will take hope in her opening them. When someone is obsessed with another person, all that matters is what is reality for the person who is obsessed – not what is reality for the object of their obsession.

That is how every stalker operates – their reality is their fantasy world that they build around the object of their obsession, and when the object destroys the stalker’s fantasy and the stalker is forced to face the true reality that the obsession object doesn’t even acknowledge their existence in some cases, the stalker escalates, and in many cases their “love” turns to hate and the stalker decides if they can’t have the person then no one can and murder takes place.

This is how Ryan escalated when the object of his obsession in the mid nineteen nineties was Felicia Scorpio (Kristina Wagner); attraction to obsession to escalation to attempted murder! He even tried to bomb Felicia and Mac Scorpio’s (John J. York) wedding! Ryan is headed the same way with Ava!