At the Metro Court, Commissioner Jordan Ashford (Briana Nicole Henry) talks to her husband Curtis Ashford (Donnell Turner) about the job he just lost, that Jasper Jacks (Ingo Rademacher) fired him from. Jordan tells him that spying on Jax was not a good idea. However, he’s reconsidering the new job Valentin Cassadine (James Patrick Stuart) gave him to find Cassandra Pierce (Jessica Tuck) and report back to him – for five million dollars. What will he decide?

Meanwhile, Josslyn Jacks (Eden McCoy) and Dev Cerci (Ashton Arbab) sit at a picnic table, probably in the yard at the Corinthos home. Joss appears to be coaching Dev on some “life skills” or maybe we should say “new life skills”. She reminds Dev that people are going to be asking a lot of questions. Dev will have to know how to answer all these questions properly so his new life and his new identity won’t be questioned. 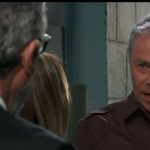 Over at Oscar’s Meadow, Franco Baldwin (Roger Howarth), as pre-2012 Drew Cain (Steve Burton) tells Kim Nero (Tamara Braun) that she changed his mind and she made him rethink everything. He’s probably talking about changing his mind about leaving Port Charles, which he has told several people lately. That ankle monitor will have to come off first, and he realizes that.

Hayden Barnes (Rebecca Budig) is in a big hurry. She impatiently tells Jax that they have to get this done. It sounds like she’s talking about finding the codicil to Mikkos Cassadine’s (John Colicos) will. They think is hidden somewhere at Wyndemere.

At the Metro Court, Carly Corinthos (Laura Wright) talks to her father-in-law Mike Corbin (Max Gail) and tells him that there is nothing more important than family to his son and her husband Sonny Corinthos (Maurice Benard)! Mike doesn’t look too happy, what could be going on there?

Other General Hospital spoilers tease that Sonny and Olivia Falconeri Quartermaine (Lisa LoCicero) will also have a discussion about Dante Falconeri (Dominic Zamprogna) on Tuesday; could Mike have overheard something and not agreed with it or possibly misunderstood what was said?

Meanwhile, also in the Metro Court, Sonny has a distinct warning for someone. General Hospital viewers can tell that Sonny means serious business when he tells the person that he or she had better not even try to renegotiate their deal!