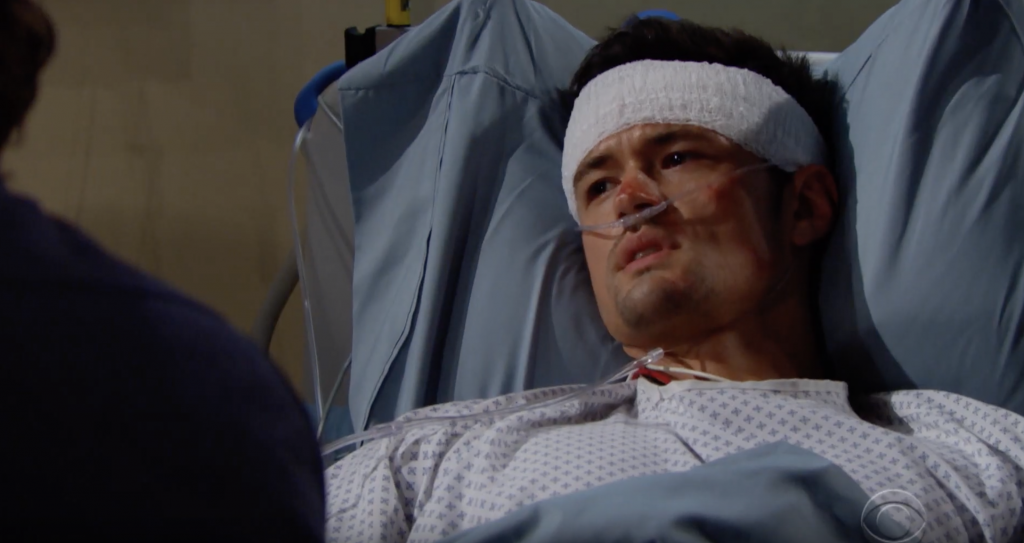 The Bold and the Beautiful spoilers for Monday, September 2, tease that Thomas Forrester (Matthew Atkinson) will be the man of the moment. As B&B viewers know, Thomas has just regained consciousness in the hospital after his fall over the cliff. He woke up as Hope Logan (Annika Noelle) was talking to him about his bad choices and how he needed to wake up to be there for his son Douglas Forrester (Henry Joseph Samiri).

The Bold and The Beautiful Spoilers – Thomas Forrester Recounts The Accident

Now that Thomas is awake, he’s going to have some explaining to do. Detective Alex Sanchez (Jeremy Ray Valdez) is intent on questioning Thomas about what happened in the moments leading up to his fall over the cliff, and Thomas is about to answer for his actions and probably for Brooke Forrester’s (Katherine Kelly Lang) actions, too. And that’s got Brooke feeling pretty anxious.

But what is Thomas going to say? It’s not entirely clear which version of Thomas we’re going to encounter now – will he be the vengeful, conniving Thomas who might take this opportunity to get Brooke into a lot of trouble, or will he be a more forgiving Thomas who just tells it like it is and says that it was all a terrible accident?

It looks like Thomas will end up supporting Brooke’s version of events and tell Detective Sanchez that his fall was an accident, given that ongoing B&B spoilers don’t indicate that Brooke is going to be further interrogated or arrested for what happened. Or perhaps Thomas won’t remember the accident right away, and Detective Sanchez will have no choice but to accept Brooke’s version of events.

At any rate, Detective Sanchez may ultimately accept that the whole thing was an accident from a legal perspective, but that’s not going to help out Brooke’s situation with Ridge Forrester (Thorsten Kaye). B&B spoilers indicate that Ridge will have a difficult time dealing with Brooke going forward, given what he witnessed on the cliff. It will be hard for him to get the image of Brooke pushing Thomas out of his head.

Thomas answers questions about his fall and Sally and Wyatt lock lips. Find out what else is coming up on Monday's #BoldandBeautiful https://t.co/NAqHVQE7YL

Meanwhile, on Monday’s new episode of B&B, Wyatt Spencer (Darin Brooks) and Sally Spectra (Courtney Hope) will enjoy some time together. As B&B viewers know, these two made plans to spend the weekend together after a nice talk at Forrester Creations. Sally was touched to overhear Wyatt defend her to Quinn Forrester (Rena Sofer) and express his desire to give his relationship with her another chance, and the two shared a kiss.

It appears that Wyatt and Sally will enjoy more time together on Monday’s B&B episode. They’ll end up reminiscing about old times when they were happy and content, and it seems that they’ll wind up kissing again, after getting a bit carried away by the memories. They’ll naturally fall into a passionate kiss, and that will lead to a playful interaction.

Of course, for Wyatt, this will be a welcome respite from the terrible memories of how his relationship with Flo Fulton (Katrina Bowden) ended. He’ll want to let Sally know that she’s not his “second choice” in this situation, but that she was actually his first choice, and that he really wants to reconnect with her.