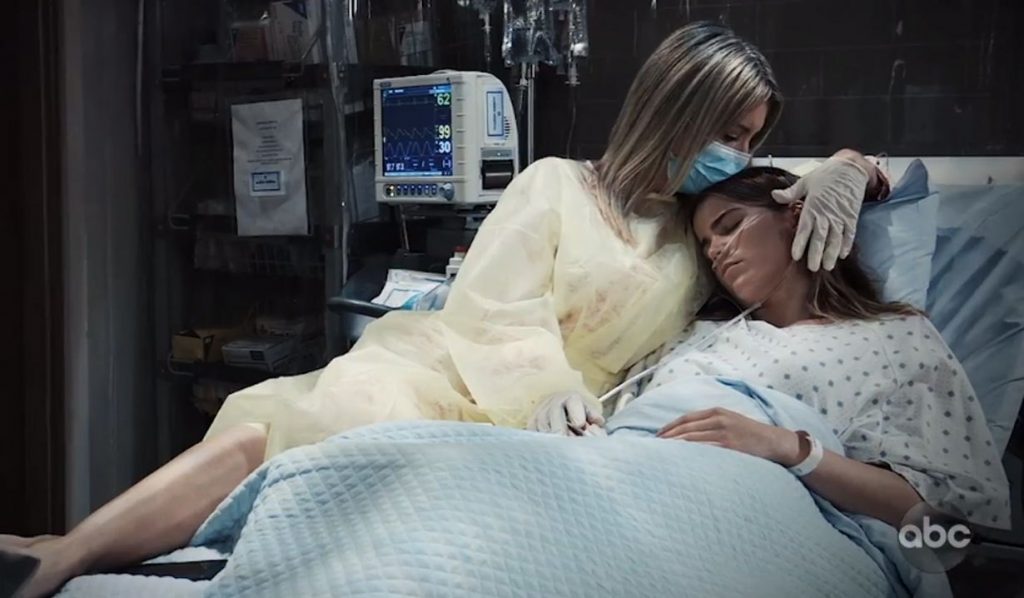 At the Corinthos mansion, Michael Corinthos (Chad Duell) walks in and tells his dad Sonny Corinthos (Maurice Bernard) that Sasha is sicker than they realized.

At General Hospital (#GH), Monica Quartermaine (Leslie Charleson) explains to Jasper Jax (Ingo Rademacher) that Sasha has the bird flu. He will need to take antivirals since he has been working with her.

At General Hospital (GH), Valentin Cassadine (James Patrick Stuart) takes a call from his daughter Charlotte who is at the park. He’s sorry for not being with her and Lulu Falconeri (Emme Rylan) says that all is fine and she hopes Sasha gets well. Nina Reeves (Cynthia Watros) tells Valentin she needs Cassandra , alive or dead.

Monica tells Jax that it’s no accident that Sasha got sick with the flu. Valentin says he’s going to handle Cassandra himself, she needs to calm down and take care of Sasha. Jax sees Nina and tries to comfort her, but she freaks out. She says she knows all about the secret file on Cassandra.

Jason explains what happened when he lost his memory and came back as a Quartermaine.

At Elizabeth Webber’s (Rebecca Herbst) house, there is a knock on her door and its Franco Baldwin (Roger Howarth). He says that they need to have a conversation about who he used to be. Liz shows him some of the artwork Aiden has done and says he was instrumental in helping his talents. Franco asks her to refer to him only as Drew.

Elizabeth explains that Dr Maddox is the one who can fix his memory and Drew is looking for him.

At General Hospital, Curtis frets about his wife going back to work so soon. She says a simple congratulations will suffice and she’s going back to being commissioner full time.

Michael tells his father that Cassandra Pierce poisoned Sasha. Sonny wonders if maybe they were collateral damage and she was trying to get to him.

At the Port Charles police depmt., Robert Scorpio (Tristan Rogers) and Mac Scorpio (John York) are discussing Dr. Cabbott. They argue about the use of technology versus using real paper.
Sonny shows up at the precinct and gives them hell about Cassandra Pierce.

In the Port Charles park, Lulu and Charlotte are watching Rocco’s game. Charlotte asks when can she go back to Wyndemere and be with Nina. Rocco runs over and is having a meltdown, Dustin (Mark Lawson) comes over to chat with them

Dustin chats with Charlotte and Rocco, he calms him down. Nina gets frantic about Sasha and begins wailing at the hospital.

Franco gets upset and says there is nothing in Port Charles for him, he wants to leave. He says he does not want to hurt her children; he just wants to live his life. Cameron shows up and yells at Franco to not ruin their family, he needs to stay.

Jordan shows up at the precinct and tells Mac that he has his job back in the police force. Valentin sees Curtis and asks him to please find Cassandra.

Sonny berates Nina about Cassandra and what happens until Jax intervenes……..flash to preview

Days Of Our Lives Spoilers: Lucas Adams Talks About His Exit From DOOL