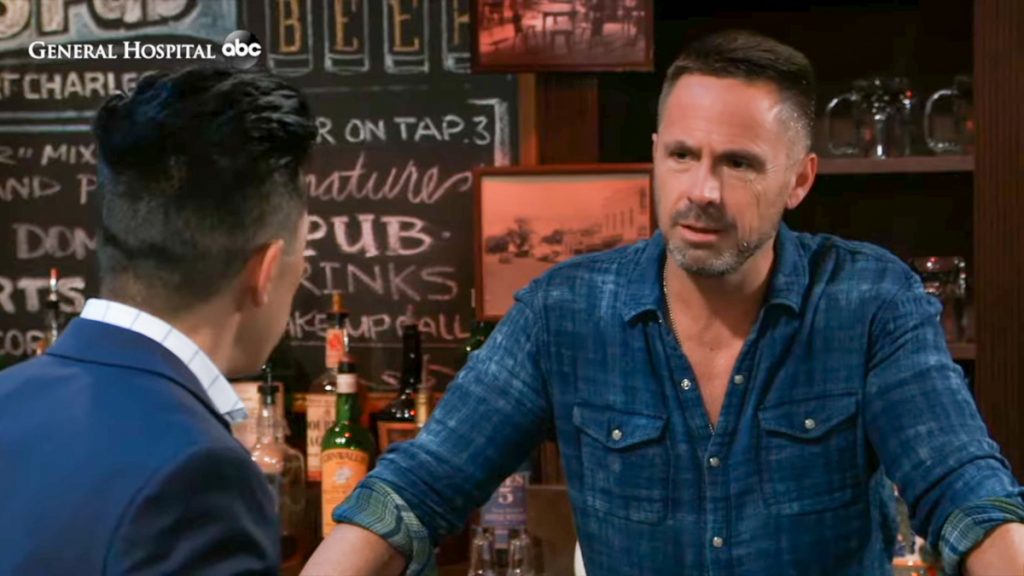 General Hospital spoilers for Tuesday, October 29 tease another exciting day of drama for General Hospital viewers with plenty of emotional confrontations among the citizens of Port Charles!

Maxie Jones (Kirsten Storms) is upset with her boyfriend Peter August (Wes Ramsey) and wants to know what’s going on! General Hospital viewers will recall a few episodes ago that Peter had told Maxie he had taken thirty-five thousand dollars in cash to put down on a house close to the waterfront but that the deal when through. Then Lucy Coe (Lynn Herring) came to see Peter to let him know he could still get the house, apparently the same one, and he turned her down in front of Maxie; he tells Maxie that everything worked out the way it was supposed to and worked out for the best.

Outside Charlie’s Pub, Julian Jerome (William DeVry) encounters a stranger; it’s Kendra Lennon (Michelle Argyris) Alexis Davis’ (Nancy Lee Grahn) trainer, who is really Kiefer Bauer’s (Christian Alexander) older sister out for revenge against Alexis for running over and killing her little brother. Julian approaches Kendra and asks if he can help her. What in the world could Kendra have up her sleeve involving Julian?

At Alexis’ home, Jason Morgan (Steve Burton) talks to Alexis. He says he is not comfortable putting his significant other, Samantha McCall’s (Kelly Monaco) future in the hands of one person! It sounds like he wants Alexis to join her partner Diane Miller (Carolyn Hennesy) in defending Sam, who is also Alexis’ older daughter in her bench trial. As viewers will recall, Sam is currently being held in Pentonville Prison awaiting trial for the murder of Shiloh Archer (Coby Ryan McLaughlin).

In the kitchen of the Baldwin home, a distraught Elizabeth Webber Baldwin (Rebecca Herbst) reassures her son, Cameron Webber (William Lipton) that what took place in the courtroom where Franco Baldwin’s (Roger Howarth) competency hearing was held, is not his fault. She stresses to an upset Cameron that none of this is his fault. Cameron has continued to blame himself for letting his stepfather take his place in the forced memory transfer of Drew Cain’s (Billy Miller) pre-2012 memories when Cameron had been kidnapped by Shiloh Archer.

General Hospital Spoilers: Laura Doubts Nikolas' Survival, Convinced He Would Reveal Himself To Her or Spencer @celebratesoaps #GH #generalhospitalhttps://t.co/3yoMSW9FQl

Meanwhile, back in the courtroom, Kim Nero, (Tamara Braun) who thought the victorious win meant that she and “Drew” in Franco’s brain could run away together, apparently is sadly disappointed by “Frankendrew” himself who has probably told her that he doesn’t think their continuing on like nothing has happened is the best for her; Kim, in tears, pleads with him, telling him HE is what is best for her!

At Volonino’s Gym, Scotty Baldwin (Kin Shriner) has come to talk to Sonny Corinthos (Maurice Benard). General Hospital viewers will recall that in September 9th’s GH episode, Scotty asked Sonny, out of desperation, to help keep his son Franco in town by having his goons detain him from leaving. Sonny reluctantly promised, and now Scotty has come to ask him to make good on his promise!