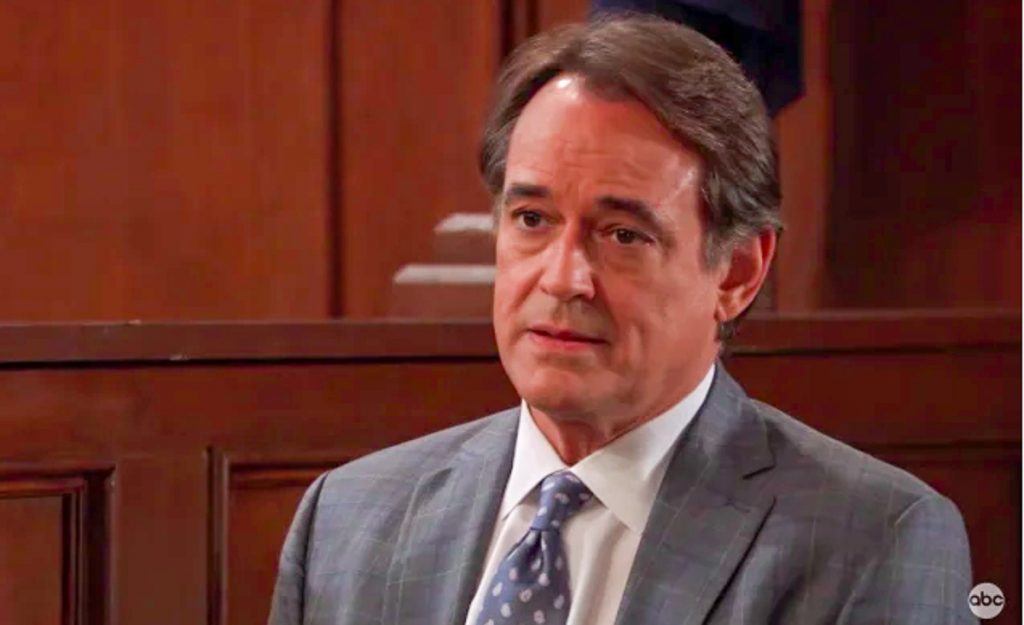 General Hospital (GH) spoilers for the week of Monday, October 28 through Friday, November 1, 2019 reveal attorney Alexis Davis (Nancy Lee Grahn) appears to be played for a fool at the beginning of the week; but towards the end of the week she will be fighting being sick.

GH sources tease that it is going to be a busy week for Brad Cooper (Parry Shen) who has been working in overdrive to keep things hidden from his husband, Dr. Lucas Jones (Ryan Carnes) as the two head into couples therapy, very much against Brad’s better judgment. Brad’s problems don’t end there as viewers know he has been butting heads with his father-in-law, Julian Jerome (William deVry) and the clashing continues this week when Julian will continue to undermine Brad. When will Lucas find out how many secrets the two men in his life he trusts the most have deceived him so deeply?

Sonny Corinthos (Maurice Benard) will reach out to Franco Baldwin (Roger Howarth) and offer him a way out as his father, Scott Baldwin (Kin Shriner) feels helpless and is desperate for a hand. Will Franco accept what Sonny is offering him and how will this impact everyone involved in the brain mapping story?

General Hospital spoilers show that Sasha Gilmore (Sofia Mattsson) and Michael Corinthos (Chad Duell) are facing their own set of challenges since it has come out that she lied about being Nina Reeves’ (Cynthia Watros) daughter; and this coming week it appears the two will be have an intense confrontation, leaving Michael extremely frustrated and impatient. He knows that Valentin Cassadine (James Patrick Stuart) is the one behind the whole scheme and Sasha is determined to keep that hidden so Nina can have some happiness in her life, but how long will he remain mum about it?

In other GH spoilers, Jasper “Jax” Jacks (Ingo Rademacher) continues to work with Hayden Barnes (Rebecca Budig), the two will meet this week to compare what they have figured out thus far. What are the two really up to? It seems that Hayden is determined to figure out about the codecil before Laura Collins (Genie Francis) and Curtis Ashford (Donnell Turner), but something causing Curtis to get very excited this week. Does he figure out that Ava Jerome (Maura West) has purchased the painting of Helena Cassadine (Constance Towers)?

The Spencer/Webber/Baldwin family is having a tough week with Cameron Spencer (William Lipton) meeting with Jason Morgan (Steve Burton) finally offering an apology; hopefully for the way he treated him at court and Elizabeth Webber-Baldwin (Rebecca Herbst) will receive a call by the end of the week, but what kind of news will she be receiving?

Be sure to tune into ABC’s General Hospital (GH) on Monday, October 28, 2019 to catch up on all the exciting stories unfolding right now in Port Charles. Check Soap Opera Spy often for updates, news, rumors and spoilers!