At Volonino’s Gym, the gym that Sonny Corinthos (Maurice Benard) owns, Michael Corinthos (Chad Duell) dukes it out with a punching bag as Detective Harrison Chase (Josh Swickard) approaches. Michael warns Chase he’d better not get in the ring with him tonight! General Hospital viewers have to wonder what kind of bee got in Michael’s bonnet to make him so threatening against his most of the time good friend Chase!

At Kelly’s, Alexis Davis (Nancy Lee Grahn) talks to her trainer, Kendra Lennon (Michelle Argyris). It sounds like they are talking about Alexis’ daughter, Kristina Corinthos-Davis (Lexi Ainsworth) as Alexis tells Kendra that she thinks her days of running to her rescue are over! What? Alexis has stopped hovering over her grown children? Who would have ever thought that would happen?! Kendra may have been slyly getting information out of Alexis about the circumstances that led to the death of her little brother, Kiefer Bauer (Christian Alexander) for whom she is putting drugs in Alexis’ nutritional drink as revenge! 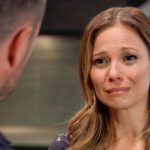 At Charlie’s Pub, Julian Jerome (William DeVry) looks like he has just grabbed Wiley Cooper-Jones (Erik and Theodore Olson) from the arms of a shocked Willow Tait, (Katelyn MacMullen) as he asks what she was doing with his grandson! Considering Michael is at the gym with Chase and Lucas Jones (Ryan Carnes) is at his and his husband Brad Cooper’s (Parry Shen) couples therapy appointment, Willow is probably babysitting! Maybe Julian just snuck up on her and took her by surprise!

Meanwhile, at Dr. Neil Byrne’s (Joe Flanigan) office, Lucas and Brad are in the midst of their couples’ therapy appointment when Lucas scares Brad. Lucas says he thinks Brad is keeping something from him! As General Hospital viewers know, Brad has been keeping something from Lucas for a little over a year now, and it’s a biggie! Lucas might be talking about the flowers that Brad received from a “secret admirer” which just might be his own birth father, Julian, trying to give Lucas a gentle hint that Brad’s no good for him! Julian would be right – Brad will never come clean on his own!

Outside Kelly’s, Laura Collins (Genie Francis) is talking to Sonny. Exactly what or who Laura is talking about is not clear, but obviously, she thinks Sonny is in need of showing a little kindness when she asks him if he thinks he might be able to find some compassion!

At the courthouse, Franco Baldwin, (Roger Baldwin) Kim Nero, (Tamara Braun) and Attorney Martin Gray (Michael E. Knight) wait with a mixture of anticipation and dread on one side of the courtroom while Elizabeth Baldwin, (Rebecca Herbst) Cameron Webber, (William Lipton) and Scott Baldwin (Kin Shriner) wait with the same mixture of anticipation and dread on the other side of the courtroom. Judge Rachel Lasser (Gina Hecht) is ready to deliver the verdict in Franco’s competency hearing as she says, “The court has no choice but to find in favor of —-!” Tune in Monday to find out!