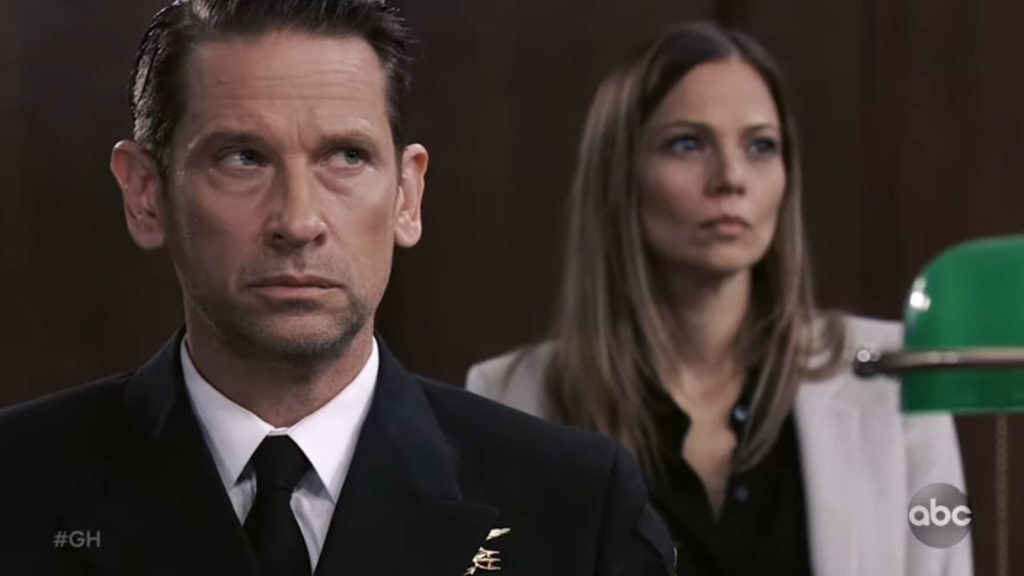 General Hospital spoilers for Tuesday, October 22 tease another exciting day of drama and suspense for GH fans as some mysteries come closer to being revealed, and new ones begin!

General Hospital Spoilers – Robert Scorpio Tells Dr. Hamilton Finn He Can’t Have His Cake And Eat It Too!

At the Metro Court, Robert Scorpio (Tristan Rogers) hunts down Dr. Hamilton Finn (Michael Easton) to give him a sage piece of advice; that he can’t have his cake and eat it too! This probably stems from the conversation Robert had with his sister in law, Felicia Scorpio (Kristina Wagner) in Monday’s episode where she was worried that Finn and Anna Devane’s (Finola Hughes) engagement might fall apart due to Anna’s long absence and the fact that Finn’s ex-fiance, Hayden Barnes (Rebecca Budig) is back in town. Robert will probably explain how it is when a person is involved with a secret agent; often the work becomes a priority over the relationships at home!

GH viewers will recall Finn and Curtis Ashford’s (Donnell Turner) discussion about Hayden and the possibility she is hiding a child from Finn from Monday’s episode. Hayden can read Curtis like a book, and she catches up to him in a hallway and asks him if he knows something she doesn’t! Hayden is still trying to keep her little girl a secret from Finn, but she won’t be able to for very long, if Finn has anything to say about it! The weekly spoiler video shows that the child is sick and in the hospital – possibly even in General Hospital!

Franco Baldwin’s (Roger Howarth) competency case is getting ready to begin, and his father Scott Baldwin (Kin Shriner) and his wife Elizabeth Baldwin (Rebecca Herbst) meet at Kelly’s to talk about the case. Scott, also her attorney as well as her father-in-law, asks Elizabeth what she is looking for, and Elizabeth, with a sense of urgency, tells Scott she’s looking for “the one thing that we missed!” General Hospital viewers will be curious to see exactly what that is, because it sure sounded like they had everything covered!

Martin Gray (Michael E. Knight) tries to prepare Franco for the competency court, presumably in his law office or somewhere in the courthouse. Martin Gray is basing his case on identity issues, namely Franco having the right to identify as pre-2012 Andrew Cain (Steve Burton) because of the memory transfer and Franco naturally believing that is who he is. It sounds like Martin will have Franco in a Navy Seal uniform if he can get one, because he tells him if they’re going to go to battle, Franco needs to be dressed for it!

At the Metro Court, Jason Morgan (Steve Burton) has a very strange request for Mayor Laura Collins (Genie Francis) and her husband, Dr. Kevin Collins (Jon Lindstrom); he says he needs them to get him into Pentonville Prison to see Ryan Chamberlain (Jon Lindstrom)! Does Jason think he can get Ryan to protect Sam McCall (Kelly Monaco) in Pentonville? This might be the only time in history GH viewers have seen Jason close to desperation!

Meanwhile, Ava Jerome (Maura West) remains either psychic or paranoid, insisting to her brother Julian Jerome (William DeVry) that “he’s watching – he’s always watching!” Is she suffering from PTSD, or IS someone watching? He has to be watching through bugs he’s placed in Ava’s apartment and everywhere she is then!