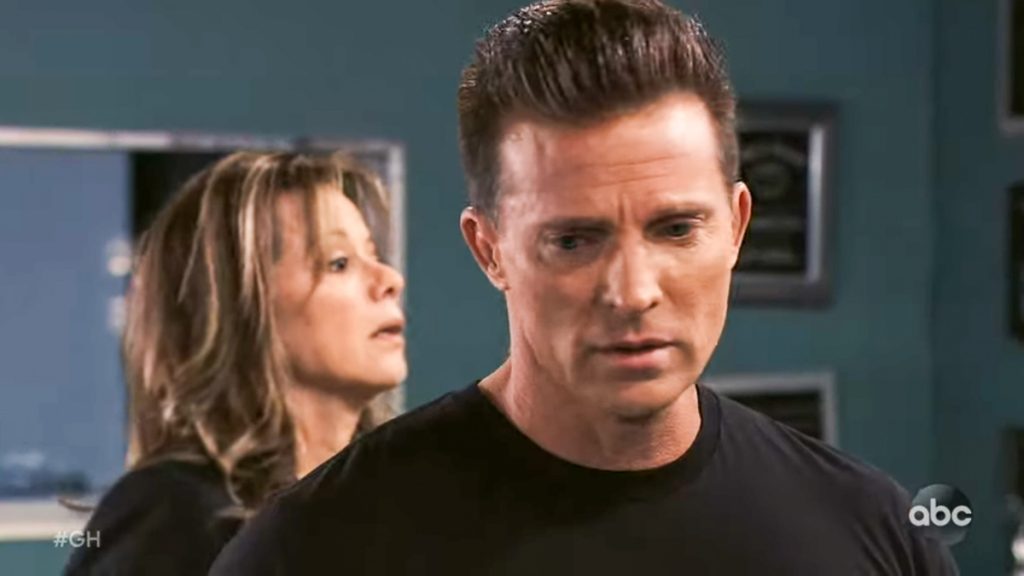 Monday, Michael Corinthos (Chad Duell) grows impatient with his mother, Carly Corinthos’ (Laura Wright) constant badgering, accusations, and interrogation of his girlfriend, Sasha Gilmore (Sofia Mattson)! Michael will have to become aggressively assertive with his mother and tell her to BUTT OUT! He’s a grown man and he KNOWS what he is doing! Meanwhile, over at the Baldwin home, Hayden Barnes (Rebecca Budig) lets her guard down with her half-sister Elizabeth Baldwin (Rebecca Herbst). Maybe she’ll make an admission about Baby Girl Finn, but fans shouldn’t count on it just yet! Also on Monday, Brad Cooper (Parry Shen) receives flowers, Ava Jerome (Maura West) collapses, and Felicia Scorpio (Kristina Wagner) is concerned.

Tuesday, Curtis Ashford (Donnell Turner) will be defensive; he feels guilty about his part in the fake daughter scam that he helped Valentin Cassadine (James Patrick Stuart) with. Elsewhere, Jason Morgan (Steve Burton) will look to Laura Collins (Genie Francis) for answers. Perhaps he wonders if she can help through her mayoral capacity to get Sam McCall (Kelly Monaco) at least out of Pentonville to somewhere safer while waiting for trial. Also on Tuesday, Elizabeth’s words resonate with Julian Jerome, (William DeVry) Dr. Hamilton Finn (Michael Easton) makes plans to see Hayden, and Robert Scorpio (Tristan Rogers) checks in with Laura.

Wednesday, Jason is with his and Sam’s son, Danny Morgan (Porter Fasullo) at Kelly’s, where they talk and have a drink together – probably hot chocolate or soda! Jason will have to explain to Danny where Mom is and why, and possibly to Scout Cain (Ella Ramacieri) as well. Poor Scout, she will probably wonder if her mother died since her dad has been declared dead by the Navy! Elsewhere, Michael notes a change in his sister, Josslyn Jacks (Eden McCoy). Maybe he sees her happier and not so mopey…that would be a welcome change! Also on Wednesday, Jordan Ashford (Briana Henry) speaks of Franco Baldwin’s (Roger Howarth) heroism at his competency hearing, Alexis Davis (Nancy Lee Grahn) needs to do her part, and Elizabeth is emotional.

Thursday, Monica Quartermaine (Leslie Charleson) is visibly upset – possibly by something going on in the hearing room at Franco’s competency hearing. Meanwhile, Finn doesn’t understand – maybe Curtis found that dog for Hayden after all, and he gets to meet “Honeybun” in person – or should that be in “dog-son”? Also on Thursday, Kim is shocked, Ava returns to the gallery, and Laura and Curtis brainstorm.