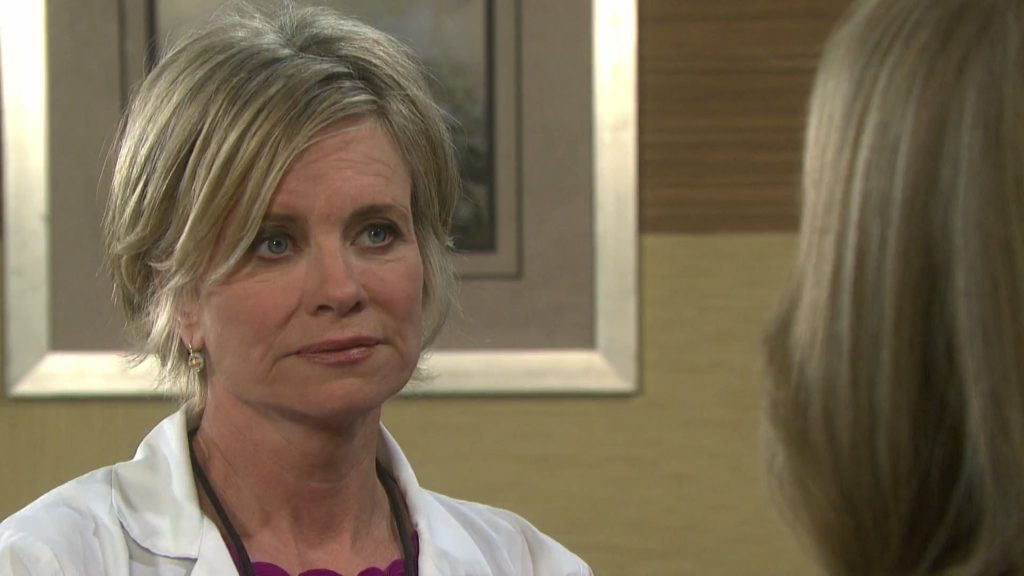 Days of Our Lives spoilers for Tuesday, October 22 tease another exciting day of drama and suspense for Days of Our Lives fans as confrontation, mysteries and romance take place between the Salemites!

Dr. Kayla Johnson (Mary Beth Evans) and Roman Brady (Josh Taylor) question Hope Brady’s (Kristian Alfonso) odd behavior as she acts skittish, suffers from sudden pains in her neck and refuses examination, and suddenly says things that even she herself is shocked by! Hope doesn’t know where they’re coming from. Kayla could suspect a brain tumor or a psychosis of some sort, but Hope would shrug it off and attribute it to not enough sleep or stress! Hope’s behavior will become increasingly odd and erratic during the week.

Dr. Wilhelm Rolf (William Utay) threatens Jennifer Horton, (Melissa Reeves) who has his flash drive and has tried to access it. This flash drive may have blueprints and formulas for either his plan to recreate Princess Gina in Jennifer’s cousin Hope, or could even have something worse on it that he doesn’t want to be exposed by a nosy reporter! Perhaps he should try playing nice and telling her all his formulas are on it for the amnesia serum, and other serums he had a chance to recreate while he still had access to the lab in Salem University Hospital that Kayla kicked him out of. Or perhaps he tries this tact first and Jennifer already knows what’s on the flash drive and that’s why she won’t give it back and why he threatens her!

Things turn romantic for Ciara Brady (Victoria Konefal) and Ben Weston (Robert Scott Wilson) as Ciara helps Ben make a gift, a toy box for his nephew, David Ridgeway (Jaxton and Dexter Ellis) who is turning one. Days of Our Lives viewers feel like they haven’t gotten enough of “Cin” lately, so this will be a welcome change from the craziness in Salem for some! The only problem is, the birthday party itself will have some craziness because of the actions of crazy Jordan Ridgeway, (Chrishell Hartley) who didn’t invite Ben and Ciara to David’s first birthday party out of being nice and trying to make amends!

As a matter of fact, Jordan has intentions to create some deadly dining at David’s birthday party. She bakes up a batch of birthday cupcakes, with one meant especially for Ciara’s consumption only! Ciara’s cupcake is poisoned, and a near tragedy happens when Arianna Horton (most recently Harper and Sydnee Udell) grabs it and gives it to David, but luckily he hadn’t put it near his mouth and Jordan snatches it away in time. However, as Days of Our Lives will find out, it still doesn’t go as planned for Jordan’s deadly cupcake surprise she meant for Ciara!