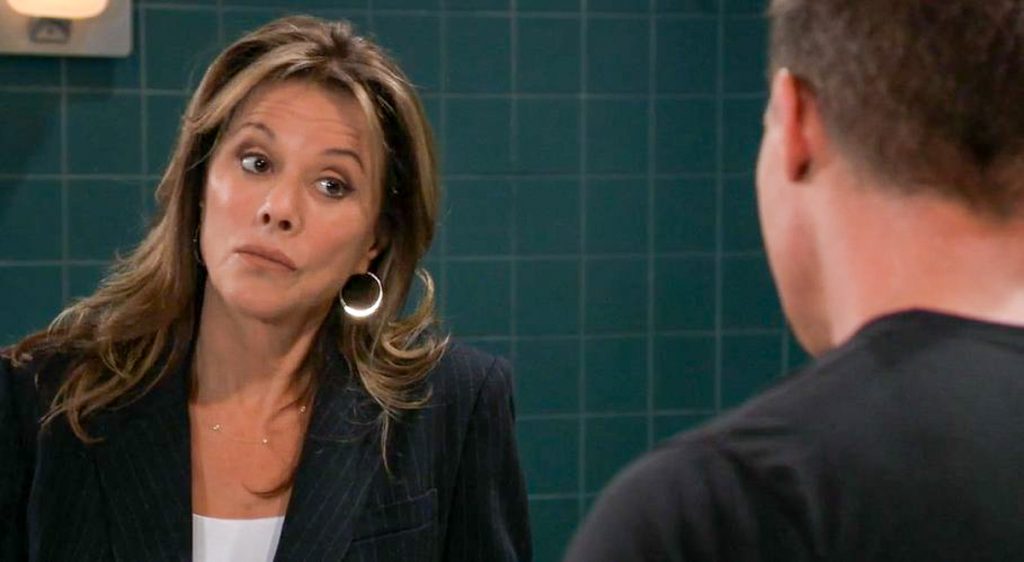 General Hospital Spoilers – Alexis Davis Is Being Duped – And Poisoned – By Her Fitness Trainer!

Alexis is being duped – and poisoned – by her fitness trainer, Kendra Lennon (Michelle Argyris)! Viewers will recall that Alexis told Kendra she was always cautious about things she takes into her body, and had the nutritional drink tested to make sure there was nothing dangerous or impure in it. But, that was the first canister of the nutritional drink that Kendra gave her; it’s the next canisters that will tell the tale! Little does Alexis know that Shiloh Archer (Coby Ryan McLaughlin) again is reaching out from his own grave, so to speak, to do harm against Alexis and her family; he had found Kendra and contacted her about Alexis prior to his death. As viewers now know, Kendra is the older sister of Kiefer Bauer, (Christian Alexander) the abusive ex-boyfriend of her daughter, Kristina Corinthos-Davis (Lexi Ainsworth) and even though Alexis cannot be prosecuted again for running him over and leaving the scene, having been in the midst of rushing to the hospital with a critically injured Kristina, that doesn’t mean that revenge cannot be pursued against her!

Kendra sat by her brother’s grave and told him her plan, and viewers saw her open the refill, as Kendra called it, of the nutritional drink and put a brown powdery substance in a new canister of the concoction and mixed it in. Kendra promised Kiefer that Alexis would pay for his murder, which is what Kendra considers the hit-and-run! Alexis is paying Kendra a pretty penny for her services, to be sure, as personal trainers are usually quite expensive, but not outside the budget of a successful defense attorney. But Alexis is being not only scammed by Kendra, but as time goes on, will become more and more ill, not more and more fit and healthy.

Whatever Kendra put in Alexis’ drink canister, it is brown, powdery, and would probably have no appreciable taste. But then Kendra is using a different flavor than the first she gave her too; it’s possible she is grinding up dried mushrooms of a poisonous variety and mixing in the drink, or some other poison that comes in a brown powder and possibly cannot be traced, such as arsenic, although it generally does not come in a brown powder. Alexis will become more and more ill by the end of the week, although she will dismiss it as some kind of virus or perhaps the flu! By the time she has finished the canister, she may become so ill that she will have to be hospitalized – if she seeks medical assistance at all, which Kendra is banking on that she won’t; she’ll just tell Alexis it’s a result of her body shedding environmental toxins, more than likely, when really she is ingesting toxins put in the drink by Kendra!

Days of Our Lives Spoilers: ‘Bristen’ Baby Bonding – Brady and Kristen Get Closer