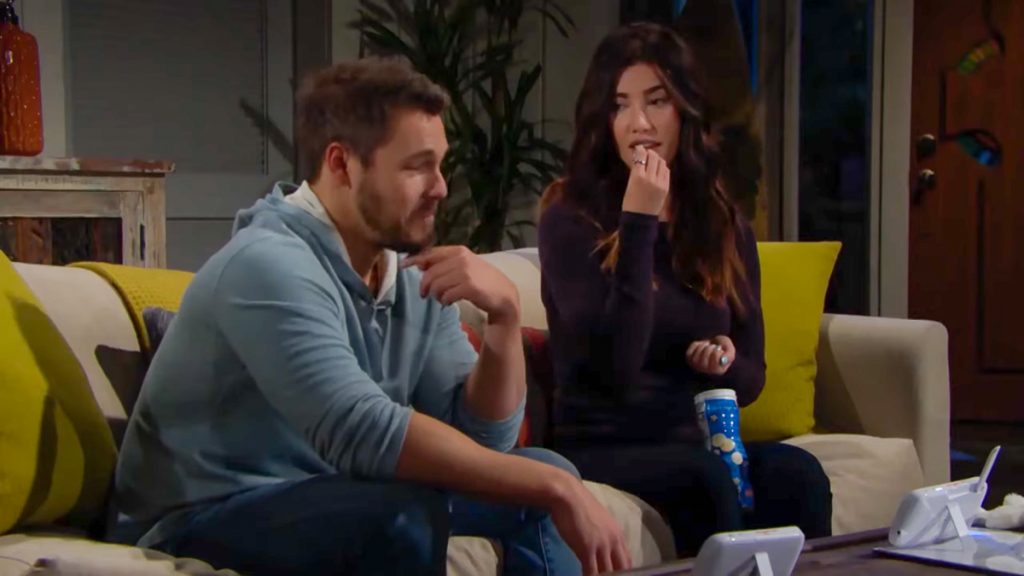 The Bold and the Beautiful spoilers for Tuesday, November 12, tease that Hope Logan (Annika Noelle) will be fearing the worst. As B&B viewers know, she’s just realized that Thomas Forrester (Matthew Atkinson) fell into a vat that allegedly contained hydrofluoric acid, which is an acid that can disintegrate a human body. And Thomas didn’t just fall – he was pushed by Hope over a catwalk into the vat, so Hope’s feeling horrified and guilty about the whole thing.

Well, on Tuesday’s episode of B&B, she’ll return home to find Brooke Forrester (Katherine Kelly Lang) waiting for her. Brooke will have been anxiously awaiting her return from her evening with Thomas and Douglas Forrester (Henry Joseph Samiri), as she was afraid that Thomas would do something to hurt Hope. As it turns out, it was exactly the opposite!

Bold and The Beautiful Spoilers – Hope Logan Confesses To Her Mother

The Bold and the Beautiful spoilers say that Hope will tell her mother about everything that happened, and at first Brooke will be overjoyed. After all, Hope will relay that Thomas signed the adoption papers allowing Hope to become Douglas’ adoptive mother. But then Brooke will hear the rest of the story. She’ll hear how Thomas figured out that Hope manipulated him and got upset, and about the frantic search for Douglas that culminated in Thomas’ fall.

Of course, Hope won’t know definitively that Thomas is gone, but she’ll definitely fear the worst and she’ll be quite upset as she tells her mother that she killed Thomas. But according to B&B spoilers, Brooke will quickly take charge of the situation and tell Hope that she needs to focus on Douglas and just keep quiet about what she thinks might have happened to Thomas. She won’t want to see her daughter go down for a crime at this point, and it looks like Hope will agree to stay mum about the whole thing.

B&B Spoilers – Ridge Forrester Opens Up To His Daughter

Next, on Tuesday’s new episode of B&B, Steffy Forrester (Jacqueline MacInnes Wood) will get a visit from Ridge Forrester (Thorsten Kaye). As B&B viewers will remember, he’s just spent some time with Brooke, and they reached an impasse in their marriage. They just can’t get past the issue of Thomas. It’s dividing them and they can’t see eye to eye.

It looks like Ridge will wind up talking with Steffy about his problems with Brooke. Of course, Steffy knew that Ridge and Brooke were having problems, but she probably wasn’t aware of just how deep the problems went, nor that Brooke felt so negatively about Thomas. Of course, Thomas isn’t Steffy’s favorite person right now, either, but she probably won’t like hearing that Brooke thinks he’s evil and completely irredeemable.

Well, Steffy will apparently let her feelings about Brooke be known to Ridge. She’ll tell him in no uncertain terms exactly what she thinks about Brooke and what she’s capable of. Steffy feels that she’s put up with a lot from Brooke over the years, and she’ll probably make that known to her dad. B&B viewers can expect Steffy to be blunt and speak her mind, and it’s probably something that her dad needs to hear.