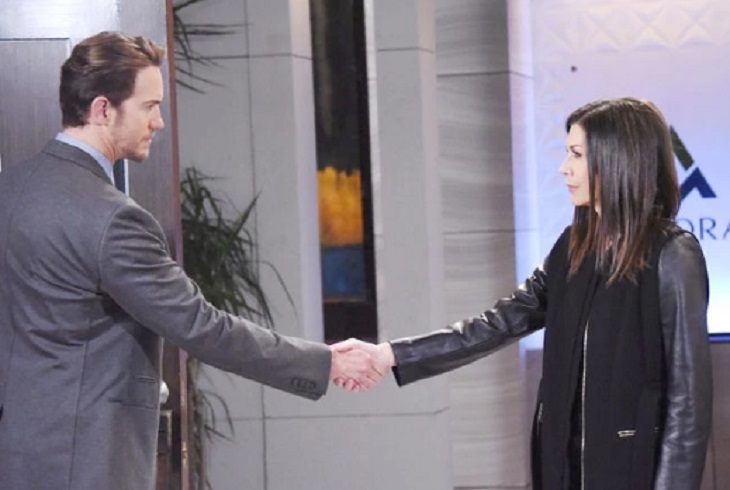 General Hospital spoilers tease that Peter August (Wes Ramsey) will indeed forgive Anna Devane (Finola Hughes) for giving him up at birth. Peter has experienced a lot of growth in realizing that holding grudges and anger does nothing to change the past, and nothing to heal the present.

Anna invited him to a Christmas Eve party at her home, which it appears that he will attend. In previews for the General Hospital episode for December 21, he is shown at Anna’s home with Dr. Hamilton Finn (Michael Easton) giving Peter and Anna some alone time.

Peter undoubtedly realizes that Anna bears no blame for him ending up with his father, Cesar Faison (Anders Hove) and so there is really nothing to forgive, although he likely will so that Anna can work towards forgiving herself.

He probably still harbors some unforgiveness towards Valentin Cassadine (James Patrick Stuart) although he did recant his statement and drop his charges against Liesl Obrecht (Kathleen Gati), which Valentin had asked him to do to keep him out of trouble with Nina (Michelle Stafford).

Valentin was the real culprit in taking baby Peter from the good home he’d been placed in and giving him to Faison, but maybe Valentin is next on the list to forgive, since he has shown remorse several times in recent months and stated it was the worst mistake he’d ever made!

Once Peter and Anna have talked everything out on General Hospital, and Anna has his forgiveness for giving him away as a baby, mother and son can forge a new relationship. Perhaps it will be guarded, on Peter’s part, and wanting to know Anna as a friend first before totally embracing her as his birth mother, but that is understandable.

If he learns of his half-sister Robin Scorpio-Drake’s (Kimberly McCullough) childhood and the absence of Anna during much of it he may have a hard time learning to trust Anna and have further questions, but he knows that Robin and Anna have moved past their past, so he should be able to as well. Stay tuned to GH and keep checking General Hospital spoilers frequently to see how Peter and Anna’s relationship evolves!