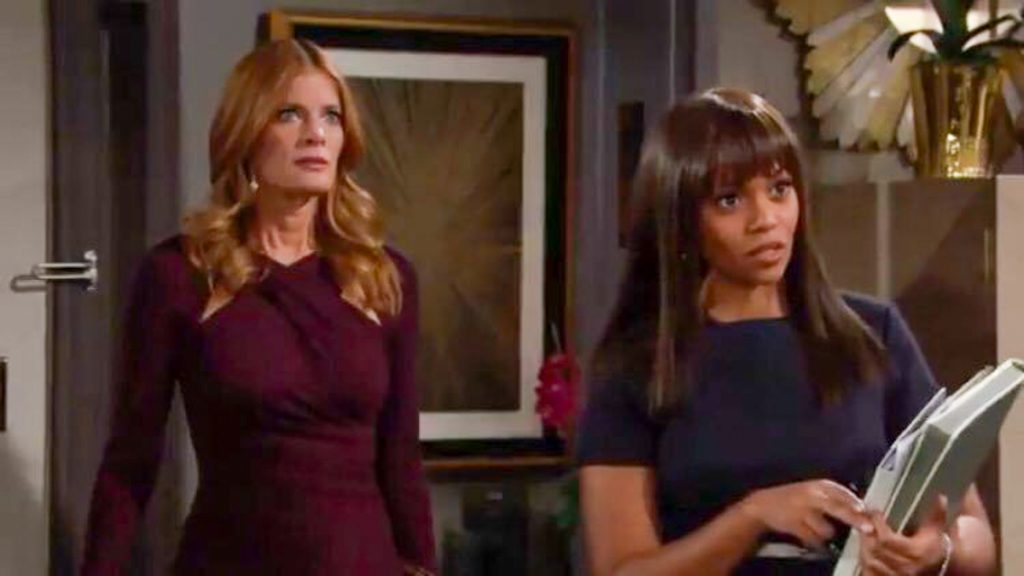 The Young and The Restless spoilers tease that Amanda Sinclair (Mishael Morgan) may be running from an abusive ex, and this will be part of her past that will be revealed in upcoming Y & R episodes!

Y & R viewers will recall that in a recent episode, Dr. Nate Hastings (Sean Dominic) and Amanda Sinclair were talking about her representing him to the medical board, where his medical license and practicing privileges had come into jeopardy when he helped Victor Newman (Eric Braeden) fake his death. Amanda was nervous and Nate noticed that she was extremely fearful when she saw a man from the back that she thought she recognized, but then was relieved that it wasn’t who she thought it was! She also has a tracker on her computer so that she will always know where “he” is; could Amanda be running from an abusive ex?

Amanda shows all the signs of running from an abusive ex, and from the terror she tries to hide when someone reminds her of him he may be a very dangerous individual who has possibly even tried to kill her! This would fit in with her not having her photograph anywhere on her attorney profile also, and she likely does not have any social media accounts – and if she does, she probably has a profile picture of a pet cat or dog or something that would be non-identifying of her. She has probably changed her name as well.

We can safely say this individual is NOT Simon Black (Jeffrey Vincent Parise) because the man she was looking at the back of when Nate noticed she became extremely fearful and distracted was a bald or shaved head African-American, not a white guy with lots of hair!

Other Y & R spoilers tease that it will be revealed that Devon and Amanda will be found to have people in common in their pasts, and the man she was frightened of actually could have resembled Nate’s adoptive father, Malcolm Winters (Darius McCrary) from the back; same shaven head, same build, and appeared to be the same height. However, Malcolm was never written in the past as having been abusive to his spouses although he could be young enough to fit as an ex of Amanda.

He was last seen at the funeral of Dr. Neil Winters (Kristoff St. John), the role having been reprised by Shemar Moore, the original portrayer. However, there is one character with a similar appearance who was only in Genoa City for a short time, and acted as a corporate spy of sorts when Victor Newman (Eric Braeden) was trying to regain control of Newman Enterprises between 2012 and 2014. That was Mason Wilder (Lamon Archey) and the character was not extensively developed other than he was a nephew of Sarge Wilder (Darnell Williams).

Sarge was a physical therapist who worked with Jack Abbott (Peter Bergman) when he was paralyzed, and although Mason didn’t have storylines with Devon, Sarge had storylines with Neil, and more than likely Devon knew who Mason was. Could Y & R be planning on bringing the character of Mason Wilder back, and make him a real bad boy? Could that be who Amanda is running from?