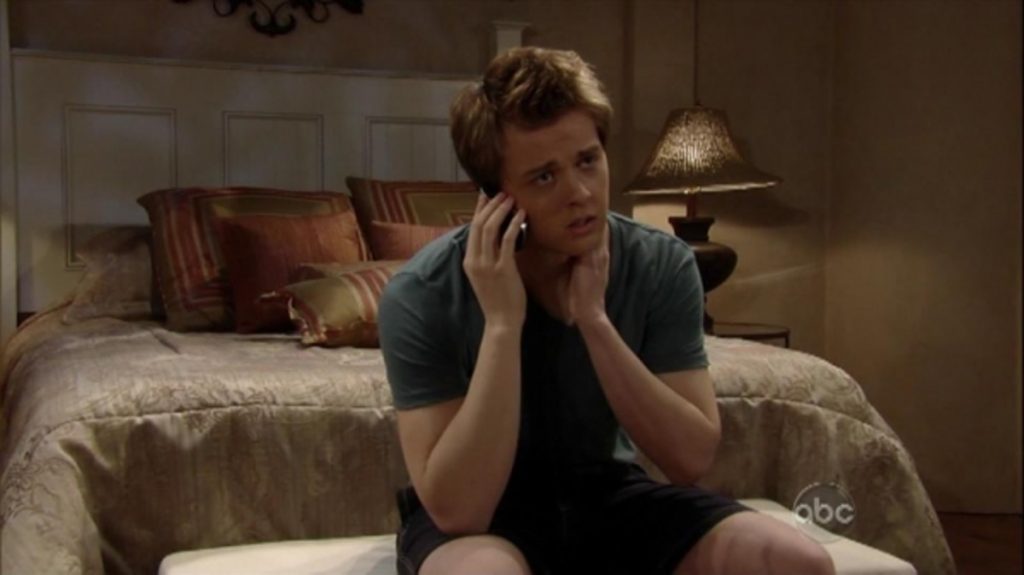 At the Port Charles Police Department, Michael Corinthos (Chad Duell) is talking with District Attorney and former WSB agent Robert Scorpio (Tristan Rogers) about Cassandra Pierce (Jessica Tuck) and had told him near the end of Wednesday’s broadcast that he thought he could help find Cassandra. Robert tells Michael that he has the best lead they have! But Robert’s not the only one after Cassandra; Sonny Corinthos (Maurice Benard) wants a piece of that action, and so does Valentin Cassadine (James Patrick Stuart)!

Elsewhere, possibly at Charlie’s Pub, Hayden Barnes (Rebecca Budig) is shocked as she asks someone if she dated Dr. Hamilton Finn (Michael Easton)! It’s too early for Anna Devane (Finola Hughes) to have returned as she’s still out of the country; unless this is someone new to General Hospital, she must be talking to Alexis Davis (Nancy Lee Grahn) since she and Finn did have a minor fling a couple of years ago between Hayden and Anna!

Alexis runs into Neil Byrne (Joe Flanigan) unexpectedly. She tells him she’d say “funny meeting you here, but it’d be a lie”! It looks like they may be at Charlie’s Pub, which would make sense if Hayden talked to her there also. This could be interesting if he walks up right when she and Hayden are talking about Finn!

GH Spoilers – TJ Ashford Has A Question For Jordan Ashford

TJ Ashford (Tajh Bellow) talks to his mother Jordan Ashford (Briana Nicole Henry) at the Port Charles Police Department, where she has recently gone back to work. She must be talking to him about returning to med school, which he had not planned to due to lack of funds; he is incredulous when she tells him that Curtis Ashford (Donnell Turner) has another job besides Aurora! Just wait till Curtis tells them about his new offer from Valentin!

Meanwhile, Valentin is still trying to convince Curtis to find Cassandra Pierce but then not turn her into the police or the WSB, but just walk away and contact Valentin. He’s offering him five million dollars; will Curtis be able to resist that big dollar offer? That would take care of not only TJ’s tuition, but all the Ashfords’ bills and maybe a nice new house and cars besides! Valentin doesn’t want the WSB or the police to get to Cassandra before he does, because that would only be a temporary solution, and Valentin wants to solve the Cassandra problem permanently!

Back at General Hospital, Finn is talking to Sasha Gilmore (Sofia Mattsson) in the isolation ward at GH. It sounds like the diagnosis has come too late for Sasha, as she asks Finn to clarify if he said she’s terminal! There was a chance that the diagnosis did not come quickly enough for the medicine to work, and if that’s the case, only a miracle will save Sasha!