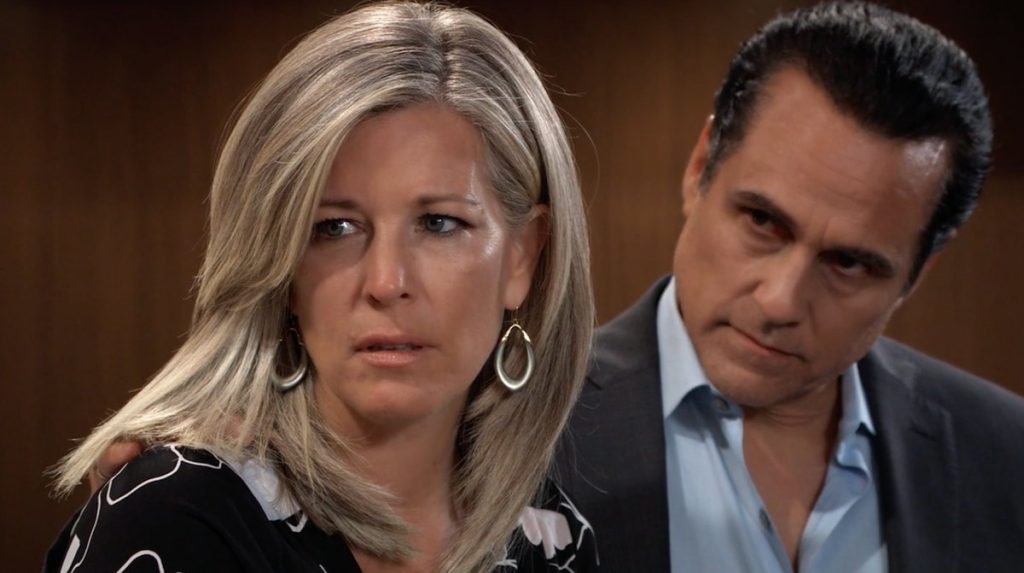 Welcome to your Monday August 26th General Hospital (GH) recap! We begin our day at the Corinthos mansion, where Sam McCall (Kelly Monaco) and Kristina Davis (Lexi Ainsworth) are helping prepare for the vow renewal. Kristina thinks it’s a great idea for Carly Corinthos (Laura Wright) and her dad Sonny Corinthos (Maurice Bernard) to do something this romantic.

At the Port Charles park, Alexis Davis (Nancy Lee Grahn) and Diane Miller (Carolyn Hennessy) collapse on the grass after a tough work out. They decide to treat themselves to burgers at the metro court.

At Charlie’s Pub, Hayden Barnes (Rebecca Budig) meets up with Jasper Jax (Ingo Rademacher). She asks Jax about his date with Liesl Obrecht and he says it went well.

At General Hospital (GH), Nina Reeves (Cynthia Watros) goes into her daughter’s room to sit by her bedside. Nina asks Sasha Gilmore (Sofia Mattsson) if she wants something to eat, but all she wants to know is why she’s still sick. In the hallway, Epiphany Johnson (Sonya eddy) asks Hamilton Finn (Michael Easton) if Sasha can be treated?

Nina comes out into the hallway and Dr Finn says Sasha has the bird flu, but it may be too late to save her. Finn asks if Sasha was in contact with birds in Puerto Rico, she says no.

Walking through the Port Charles park, Harrison Chase (Josh Swickard) asks Willow Tait (Catelynn McMullen) if she wants to move in with him. Willow says it’s a great question and she’s wondering if he’s only asking because she does not have a job.

Willow wonders if she will annoy him somehow and he promises he will tell her.

At the Corinthos mansion as they prepare for the vows, Carly Corinthos (Laura Wright) comes downstairs and realizes the car is missing, along with Dev and Josslyn. Suddenly Dev and Josslyn Jax (Eden McCoy) arrive, they were out picking up a wedding bouquet.

The doorbell rings and Bobby Spencer (Jaclyn Zeman) arrives with Mike and Avery. Mike Corbin says he recognizes that Sonny was at his wedding to Yvonne and congratulates him on his. The wedding begins as Carly walks down the aisle towards the back porch.

Alexis explains that her and Neil Byrne (Joe Flanigan) are no longer doctor and patient. Diane explains that Dr Byrne was with a woman on a cruise that she took with Max, around the Port Charles lake.

General Hospital Spoilers: When Is Spinelli Heading Back To Port Charles? @celebratesoaps https://t.co/XuWhDnPlIE

At Charlie’s Pub, Jax and Hayden discuss the relationship between Valentin and Nina. Jax has a feeling that Valentin Cassadine (James Patrick Stuart) is keeping secrets from her. Hayden says she does not feel bad for crazy Nina Reeves.

The Corinthos vows end and the family enjoys presents and wedding cake, Bobby catches the bouquet. Finn worries about how Sasha got the bird flu and wonders if she was purposely poisoned.

At General Hospital, Sasha falls asleep as Nina gets a text message. It’s a photo of Sasha, Michael and Cassandra.

At the Corinthos mansion, Chase shows up and says he needs to ask about a missing foreman from the warehouse……..flash to preview