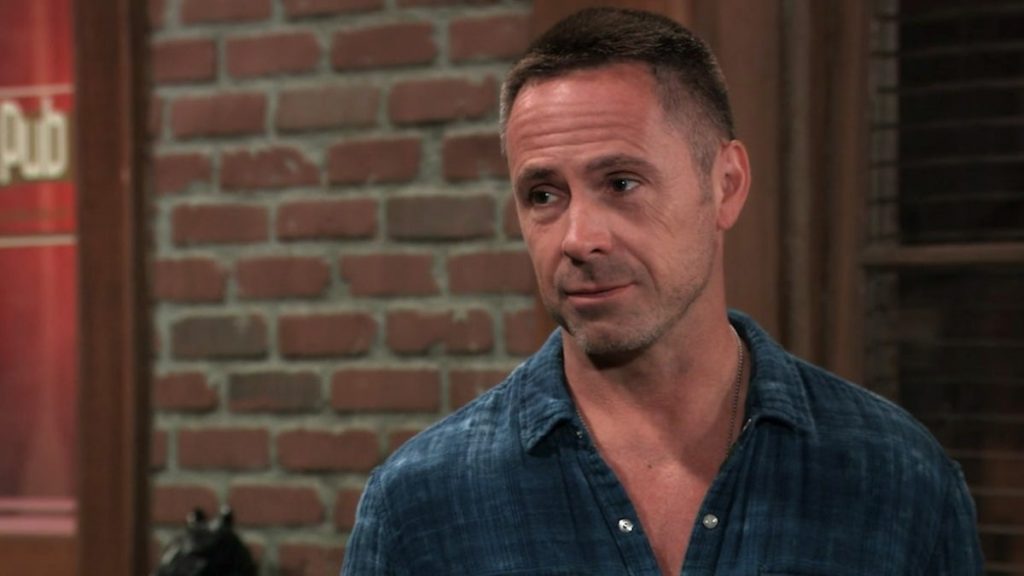 Welcome to your Tuesday August 27th General Hospital (GH) recap! We begin our day at the Corinthos mansion, where Carly Corinthos (Laura Wright), Sonny Corinthos (Maurice Bernard) and Jason Morgan (Steve Burton) are relaxing after the wedding. Carly says how lucky she is and they all need to appreciate their lives. There is a ring at the doorbell and its Harrison Chase (Josh Swickard) who says that one of his warehouse foremen Barry, is missing.

At Charlie’s Pub, Bobby Spencer (Jaclyn Zeman) sees Scott Baldwin (Kin Shriner) and joins him at the bar. He asks her where she got the flowers from and she says he caught them at Carly’s vow renewal ceremony. Bobby wishes there was something she could do to help him and he says there is something.

At the Metro Court Hotel, Franco Baldwin (Roger Howarth) answers his hotel room and its Liesl Obrecht (Kathleen Gati). He asks for bath towels and she slaps him hard across the face and says “snap out of it.”

In the park at Oscars Meadow, Kim Nero (Tamara Braun) ignores a call from Elizabeth Webber while thinking of her interaction with Franco at the hospital. Elizabeth Webber (Rebecca Herbst) leaves a voicemail asking to meet with Kim.

Julian Jerome (William DeVry) comes by the park and they discuss buying a new apartment in NYC. Suddenly Kim asks Julian to marry her, to his surprise. Kim says it doesn’t need to be anything fancy and they can go to the courthouse, but Julian says it feels rushed. Kim gets upset at Julian’s idea that the proposal has to do with fending Franco / Drew away from her.

Nina leaves the hospital room and shows Valentin Cassadine (James Patrick Stuart) the text photo. Nina shows the photo of Cassandra to Finn, who is shocked to see the connection. Finn says they need to alert the authorities before Cassandra makes anyone else sick.

Liesl Obrecht (Kathleen Gati) yells at Franco and says she’s going to get him out of this situation he is in. She tells Franco that he is her best friend and she will make him remember his real life. Franco is annoyed by her as she continues to tell him he is not Drew.

Liesl tells him that she is going to help him get his true self back. She says the life of Drew Cain does not belong to him and he is a world renown artist. He needs to remember those how love him – her, his father, his kids, and his wife Elizabeth.

GH Spoilers – One of Sonny Corinthos’s employees is missing

At the Corinthos mansion, Harrison Chase (Josh Swickard) questions Sonny and Dev about their coworkers “disappearance.” He asks if Barry had any conflicts with anyone at the warehouse which Dev says there were none he knows of. Dev lies to Chase and Sonny is furious about the lie he comes up with.

At the Webber house, Epiphany Johnson (Sonya Eddy) pops over to see how her friend Elizabeth Webber (Rebecca Herbst) is doing. Epiphany wants to know how she is doing and can tell she’s upset, they embrace. Elizabeth starts crying about Franco and Epiphany consoles her.

Sasha's life hangs in the balance. Nina plots her revenge on #GH. #GeneralHospital Read more by clicking the link below ⬇️⬇️⬇️⬇️https://t.co/MecxWauFjL

Scott and Bobby discuss Sasha’s “illness” and he wonders if Franco gets quarantined, he will be forced to stay in town. Bobby throws a glass of water in his face, upset by the proposition. Bobbie is furious with Scott and he says she may be his only hope to save his son.

Scott lists all of his children that have left or died and how badly he needs to keep Franco in his life.

Liesl tells Franco it would be foolish for him to throw his family away. She leaves to the hospital and is told she needs to take a round of antibiotics. Sonny tells Dev he has no clue what has happened to Barry.

Nina tells Sasha and Michael who Cassandra Pierce really is, a major drug trafficker. They think she purposely contaminated her with the deadly flu. As Elizabeth is about to walk out the house, Franco shows up at her door…..flash to preview!