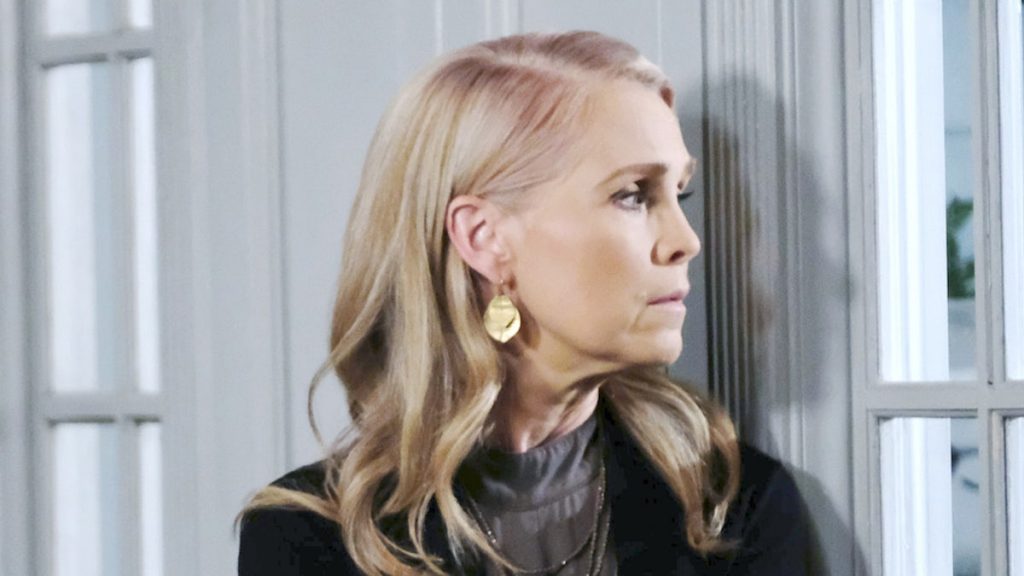 Days of Our Lives spoilers for Thursday, August 29 tease another day of exciting drama and tense situations for Days of Our Lives fans as some Salemites strive to bring two of their own back home, and two others leave Salem!

Eric Brady (Greg Vaughan) and Jennifer Horton (Melissa Reeves) go over District Attorney Melinda Trask’s (Laura Kai Chen) head and pressure Mayor Jack Deveraux (Matthew Ashford) to make a deal with Kristen DiMera (Stacy Haiduk)! Undoubtedly they will impress on him that if the real Nicole Walker (Adrienne Zucker) survived the explosion, maybe Dr. Wilhelm Rolf (William Utay) did too, and more amnesia serum can be made! Of course, they will also tell him that Holly Jonas (Scarlett and Harlow Mallory) is alive also and mother and child need to be found, but they have no idea where to start looking, and they need a way to get that intel out of Kristen!

Meanwhile, back at the Kiriakis mansion, Sarah Horton Brady (Linsey Godfrey) and Xander Kiriakis (Paul Telfer) will have a contentious conversation about Eric and Nicole! Xander, who’s sweet enough on Sarah to want to change for the good, will likely warn her that Eric will be torn between her and Nicole if she is found alive, in spite of Eric thinking he was over her. This would play on Sarah’s fears that she expressed to her mother, Maggie Horton (Suzanne Rogers) and possibly give Xander a door into Sarah’s heart if her worst fears about Eric and Nicole do come true, although Xander thinks he is truly not trying to manipulate Sarah.

Chloe Lane (Nadia Bjorlin) updates Brady Black (Eric Martsolf) after she has completed her audition for the touring opera company in New York City that she mentioned to him in a recent episode of Days of Our Lives. Obviously she has passed the audition, because she tells Brady that she received a life-changing offer; a chance to sing with them! This has been a dream of hers for years, so of course she’s not going to pass it up! She tells Brady she’s moving out of Salem to take this singing job with the touring opera! This will also be Nadia Bjorlin’s last airdate on Days of Our Lives.

Tripp Dalton (Lucas Adams) also says his goodbyes to Salem, and to Dr. Kayla Johnson (Mary Beth Evans). His roommates JJ Deveraux (Casey Moss) and Haley Chen (Thia Megia) are moving out from the loft anyway, leaving him a bit in the lurch, and besides, he’s falling for Haley and not feeling right about it. Tripp has decided to go to med school in Chicago and tells him stepmother the news! This will also be Lucas Adams’ last airdate on Days of Our Lives.