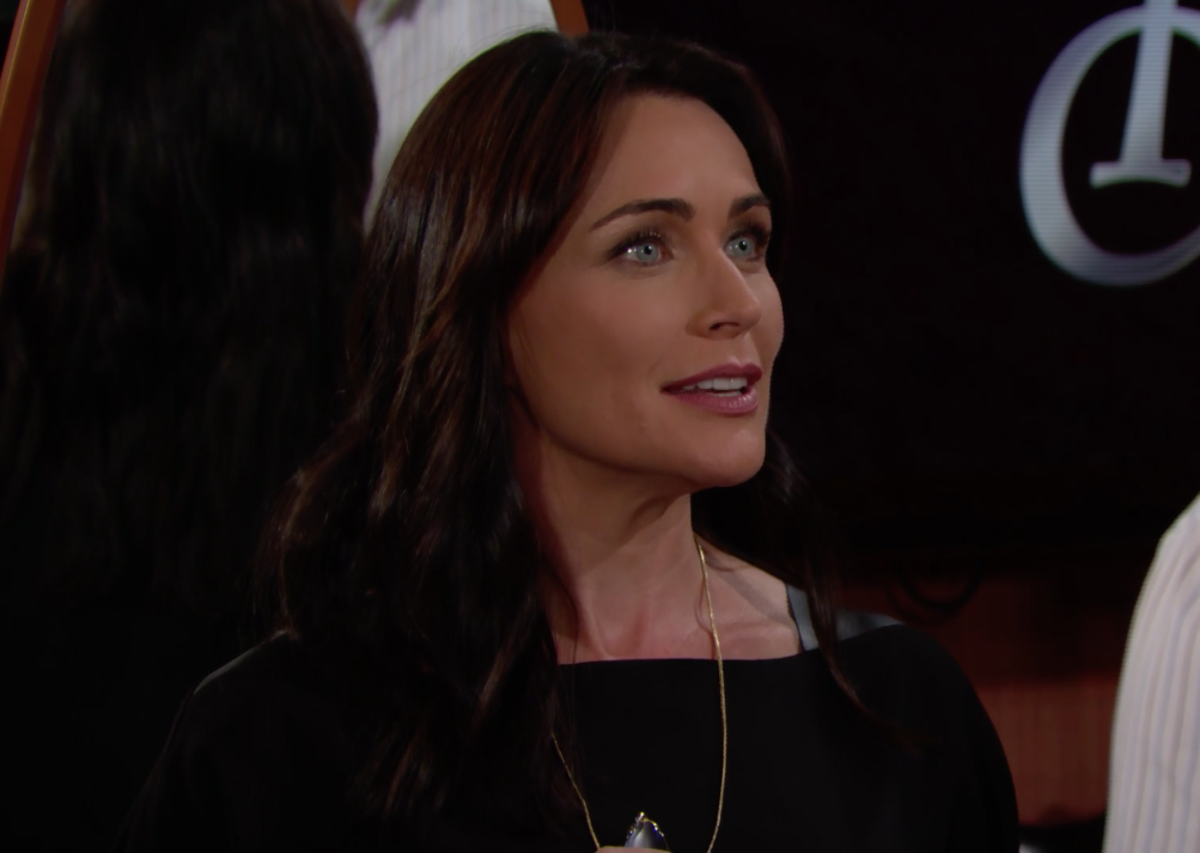 The Bold and the Beautiful spoilers for Thursday, August 29, tease that Shauna Fulton (Denise Richards) will have a big request for Quinn Forrester (Rena Sofer). As B&B viewers know, Shauna has just approached Quinn at Forrester Creations and has asked Quinn for her help. Shauna’s got no money and nowhere else to turn, and she’s hoping that Quinn will agree to help Flo Fulton (Katrina Bowden) get out of jail and perhaps get a lawyer to help Flo out of her legal jam.

But Shauna’s going to have an awful lot of explaining to do first. Quinn previously told Eric Forrester (John McCook) that she was having real difficulty believing that Flo could have done all of the things that she was accused of. On Thursday’s episode of B&B, Shauna and Quinn will sit down and Shauna will explain the whole sordid story to Quinn, including how Flo posed as a birth mother for her good friend Reese Buckingham (Wayne Brady) and quickly got in so deep that she didn’t think there was any way out.

Quinn will hear all about how Reese and Zoe Buckingham (Kiara Barnes) insisted that she keep quiet about the baby swap and adoption scam, even when she wanted to come forward. And then Quinn will hear about how Thomas Forrester (Matthew Atkinson) got involved and started threatening Flo with prison time or with physical harm if she told the truth.

Quinn will likely find herself sympathizing with Flo. Sure, she’ll probably feel that Flo made some terribly bad choices, but she’ll probably be able to put herself in Flo’s shoes and see that Flo was simply in a very bad situation, made some bad decisions, and is now paying a huge price for it. Quinn will also probably empathize with Flo when it comes to how the Forresters and the Logans are now turning on her, since Quinn has found herself in similar family situations in the past.

But will Quinn decide to help Shauna and Flo? Bail money is a significant chunk of change, and it might be tough for Quinn to get her hands on that kind of money without Eric knowing about it, because he certainly wouldn’t approve of helping Flo at all. And what about Flo’s need for a lawyer? That’s a costly expense, too, and is something that Quinn might have a hard time swinging without Eric knowing. What will Quinn do?

Next, on Thursday’s new episode of B&B, Liam Spencer (Scott Clifton) will make a sneaky move. As B&B viewers know, Liam isn’t happy with Thomas right now, despite that fact that Thomas is in grave condition and lying in a hospital bed. Liam is furious with Thomas for keeping the truth about Beth Spencer (River Davidson and Madeline Valdez) from him and Hope Logan (Annika Noelle) and for manipulating Hope into marrying him.

It seems that Liam will slip into Thomas’ hospital room undetected, and he’ll take the opportunity to talk to an unconscious Thomas. Liam, who’s angry and disgusted at Thomas, will share his thoughts about what Thomas has done, even though Thomas is lying there unconscious and probably can’t hear him. But it won’t be long before Ridge Forrester (Thorsten Kaye) walks in and hears Liam scorning Thomas.

The Bold And The Beautiful Spoilers: Is There A Path To Redeem Thomas On B&B? https://t.co/4E7O5u3T2I pic.twitter.com/zOlxrZUYFD

Ridge will be instantly furious with Liam for his actions, and he’ll probably insist that Liam remove himself from the room immediately. Look for an intense blowup between Ridge and Liam, as Ridge gives Liam a piece of his mind about his inappropriate behavior. Ridge will think that they need to be encouraging Thomas to wake up, not berating him for his mistakes.

Of course, Ridge is well-aware that Thomas has behaved inappropriately, and he’d probably like to give Thomas a piece of his mind at some point, too, but now just isn’t the time. Ridge will want to create a healing environment for his son, not a hostile one. Look for Ridge to insist that his son be treated with respect, despite the mistakes he’s made.