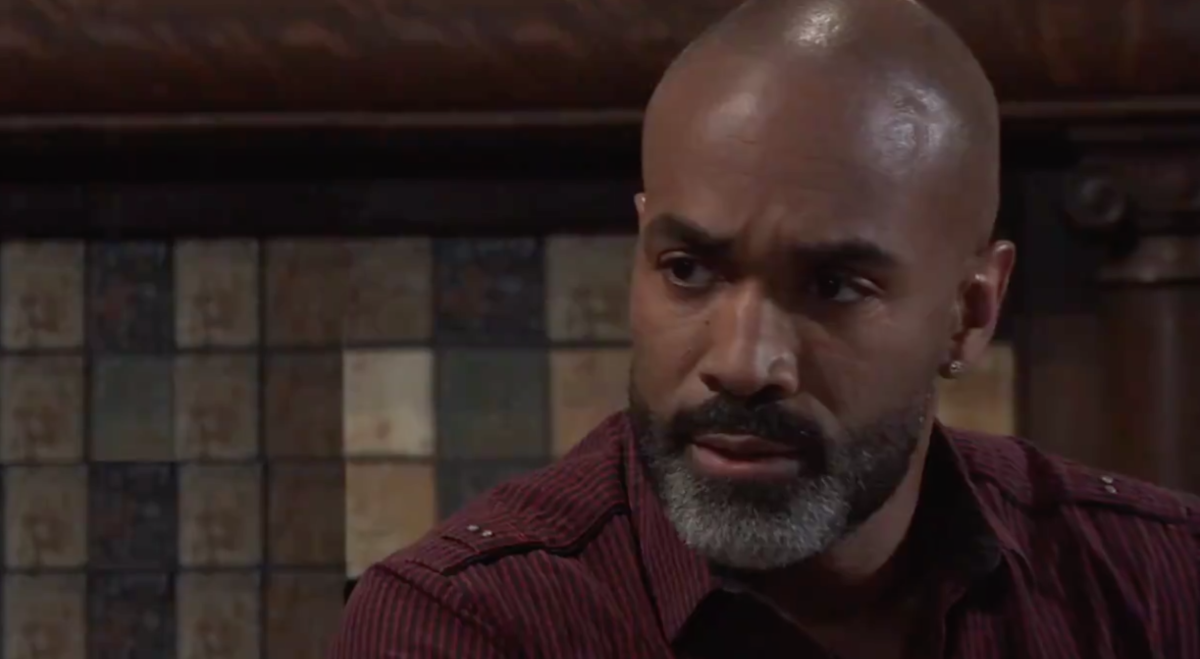 General Hospital spoilers tease that it will be another exciting day of drama for fans with some Port Charles residents returning home, and others leaving – perhaps forever!

Curtis Ashford (Donnell Turner) passes on a message from Drew Cain (Billy Miller) to Elizabeth Baldwin (Rebecca Herbst). As viewers know, Billy Miller has filmed his last scenes and has left the show, so yesterday’s scene of the elevator doors closing when he left GH with the suitcase of money bound for Afghanistan may have been his last.

Curtis is likely letting her know his plans, and that the money Charles “Tex” Owens (uncast character) hid in his wife’s car indeed was found in the car that Drew had gifted his late son, Oscar Nero Quartermaine (Garren Lake Stitt) with. He spoke briefly with Franco Baldwin (Roger Howarth) aka “Frankendrew” about the money he retrieved and Franco wanted to head for Afghanistan with his circa 2012 memories of Drew’s, but Drew talked him out of it and said his company had contacts in Afghanistan so he would do it. Curtis is probably passing on the info to Liz. General Hospital viewers wonder if Drew’s plane will go down or if he will disappear, leaving room for a recast; we’ll just have to wait and see what happens!

Meanwhile, Frankendrew has found Ava Jerome, (Maura West) probably in the Metro Court and somehow knows that Franco and Ava knew each other and once were close. Perhaps he did a little research on his old self! Frankendrew says to Ava, “Maybe you can give me the real story about this Franco”. But will she tell him the real story or pretty it up for him? When she was talking to his father Scott Baldwin (Kin Shriner) in yesterday’s episode, she felt like Franco not being able to remember all his mistakes and terrible crimes he had committed in the past was a gift! It’s a distinct possibility Ava will tell him the good but leave out the bad of his past!

Peter August (Wes Ramsey) has something to worry about, being blackmailed by David Henry “Shiloh” Archer (Coby Ryan McLaughlin) from behind bars about his own ugly past! He warns his girlfriend, Maxie Jones (Kirsten Storms) that there’s something she needs to know! But will he have the nerve to tell her the whole truth? Why would she believe Shiloh anyway, and why would anyone else, for that matter?

Dustin Phillips (Mark Lawson) has arrived to pick up Lulu Falconeri, or is it Lulu Spencer (Emme Rylan) for the Uber ride that Maxie set up. He starts to tell her he’s sorry, and then says, no, actually he’s not sorry! Maybe Lulu updated him that her divorce was final and he tells her he’s not sorry because he wants a shot at some romance with her? Lulu may not quite be ready for that just yet!

Elsewhere, Dr. Hamilton Finn (Michael Easton) tells someone he’s glad that they came home; could Anna Devane (Finola Hughes) be back, or is he talking to Hayden Barnes (Rebecca Budig) who might have told him she’s staying in town permanently? Finola Hughes has been back from her yearly vacation and filming, so it could be either Anna or Hayden, or perhaps GH will surprise us and it will be someone else entirely!

At Charlie’s Pub, Kim Nero (Tamara Braun) pleads with Julian Jerome (William DeVry) to move to Manhattan right away; they could even leave tonight! Obviously she is shook up by Frankdrew’s continued pestering of her, and wants to flee the situation!

In Pentonville Prison, Nelle Benson (Chloe Lanier) and Shiloh seem to be plotting since they are alone in a room in the prison and Nelle tells him it looks like it’s just the two of them! Nelle must know about Shiloh from her cellmate Lorraine Miller, formerly Harmony (Inga Cadranel)! Are they plotting an escape together? Ryan Chamberlain (Jon Lindstrom) won’t like it if they don’t take him along for the ride!