General Hospital (GH) spoilers tease that Josslyn Jacks (Eden McCoy) runs into someone quite unexpected in the park – Nelle Benson (Chloe Lanier)! Nelle is glad to see her, but the feeling is definitely not mutual!

As General Hospital viewers undoubtedly know, in many areas prisoners in medium custody are used to pick up litter at the sides of highways and roads, supervised by prison guards. In a new General Hospital Sneak Peek, “Josslyn Jacks Runs Into Nelle,” Nelle is in a Port Charles park with a couple of other female inmates and a guard, picking up litter on one of these supervised work outings.

Nelle spots Joss looking at her cell phone and calls her name. Joss says, no, this is NOT happening and can’t believe Nelle is there and not in Pentonville! The guard begins to stop Nelle from proceeding toward Josslyn, and then Nelle explains that Joss is the girl she had been talking to her about who her kidney was donated to. The prison guard gives Nelle one minute to talk to Josslyn. 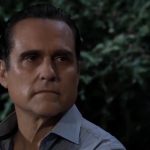 Nelle goes up to Joss and tells her it’s good to see her. Joss, extremely annoyed, tells her to save it and also tells her that her saccharine sweet act will never fly with her again! Then Nelle asks her how Michael Corinthos (Chad Duell) is; Joss tells her Michael is great – he’s got this new girlfriend now, and she’s super kind, smart and beautiful and the whole family likes her. Nelle says that’s wonderful. Joss responds, yeah, she’s glad to see him moving on from Nelle!

As General Hospital viewers will recall, Nelle is Michael’s former girlfriend, and Carly Corinthos’ (Laura Wright) adoptive younger sister, the daughter of her adoptive father Frank Benson (uncast character) who came to Port Charles looking for Carly, wanting to ruin her life much as Carly had come to town looking for Bobbie Spencer (Jacklyn Zeman) to ruin hers many years earlier!

She became involved with Michael and the two got engaged; Michael was snowed by her in spite of Carly and Bobbie’s suspicions of her. It was revealed later that she was suspected of murdering her ex-fiance, Zachary Grant (uncast character) and was suspected of being after his money since his will was conveniently changed for her to inherit his money and he was from a wealthy family!

Detective Harrison Chase (Josh Swickard) came to Port Charles looking for her, to make his botched case right and make sure she paid for her crimes; she had seduced him and therefore compromised his case against her. She became pregnant with Michael’s baby, Jonah Corinthos (Erik and Theodore Olson) and swapped him with Lucas Jones (Ryan Carnes) and Brad Cooper’s (Parry Shen) adoptive baby who died of crib death, and now known as Wiley Cooper-Jones. Chase and Michael worked together to trap her for her crimes committed in Port Charles.

The Young And The Restless Spoilers: Devon Accuses Cane Of Being Behind The Challenge To Katherine’s Will