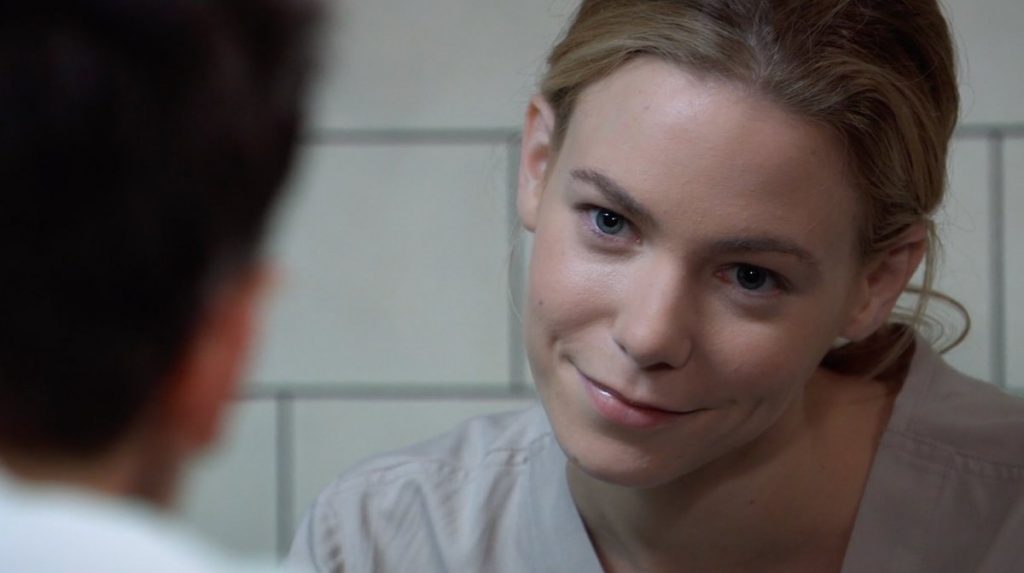 Welcome to your Friday September 6th General Hospital (GH) recap! We begin our day at Charlie’s Pub, where Diane Miller (Carolyn Hennessy) and Alexis Davis (Nancy Lee Grahn) are having breakfast. Diane says she can deflect all she wants, but she needs to hear about the date with Neil. We flashback to her date with Neil where they are at drag bingo

At Kelly’s Diner, Sonny Corinthos (Maurice Bernard) is feeding baby Wiley while having lunch with Lucas Spencer (Ryan Carnes) and his wife Carly Corinthos (Laura Wright). Lucas asks about Josslyn and Carly says she’s trying to get her ready for the school year.

Outside Kelly’s, Josslyn Jax (Eden McCoy) and Dev Cerci (Ashton Arbab) are about to go eat when she complains about school starting. Dev says she should skip school, as her dad Jasper Jax (Ingo Rademacher) approaches and agrees with him.

At General Hospital (GH), Brad Cooper (Parry Shen) shows Liesl Obrecht (Kathleen Gati) that she has changed the results. The results now say conclusively that Sasha and Nina are mother and daughter. Obrecht threatens Brad that his family is safe as long as hers is as well.

Liesl runs into Valentin Cassadine (James Patrick Stuart) and explains that she took care of the DNA issue.

General Hospital Recap – Nelle Benson is up to no good

Nelle says she read his book and thinks it was all a bunch of nonsense. Though she does believe that they can help each other, she wants to reunite him with his son Wiley.

At General Hospital (GH), Nina Reeves (Cynthia Watros) holds a stuffed animal and tells her daughter Sasha Gilmore (Sofia Mattsson) how strong she is. While Sasha is asleep she lists all the wonderful family she now has and what a brave girl she is.

Hamilton Finn (Michael Easton) checks on Sasha and says he’s not seeing any residual damage, she is recovering. Nina Reeves (Cynthia Watros) screams out in joy and hugs Valentin and Michael.

In a flashback, Alexis relays how she and Neil went to drag bingo at the Floating Rib. Manila Luzon from Drag Race heads up the game and Neil says he enjoys drag bingo in particular. Neil and Alexis discuss each other’s exes as they play the game.

Outside Kelly’s, Josslyn relays to her father how difficult going back to school is without Oscar. He tells her to take it easy and he understands how she feels. Jax meets Dev and says he did not know Sonny still relatives around Bensonhurst.

The kids head to school and Jax tells Sonny it would have been nice if someone told him a teenage boy was living with them and his daughter.

Lucas catches up with his sister Carly

Lucas asks Carly is if all is okay with her pregnancy and she says yes. Carly tells Lucas that she saw Brad in deep conversation with Liesl and worries they are up to no good.

Lucas drops by the hospital with Wiley and tells Brad that his sister saw him conversing with Liesl.
Everyone goes into Sasha’s hospital room and she is sitting up and awake. Dr Finn says her lungs are cleared and she should recover.

Jax and Sonny argue in front of Carly about Dev til Jax makes the suggestion that Josslyn should move in with him.

Alexis wins bingo and kisses Neil in all the excitement, declaring herself the queen of bingo. Shiloh wonders why Nelle wants to help him and she says they have a common enemy, the Quartermaines. Nelle says she has a plan for him to get his son and his stock returned to him…….flash to preview