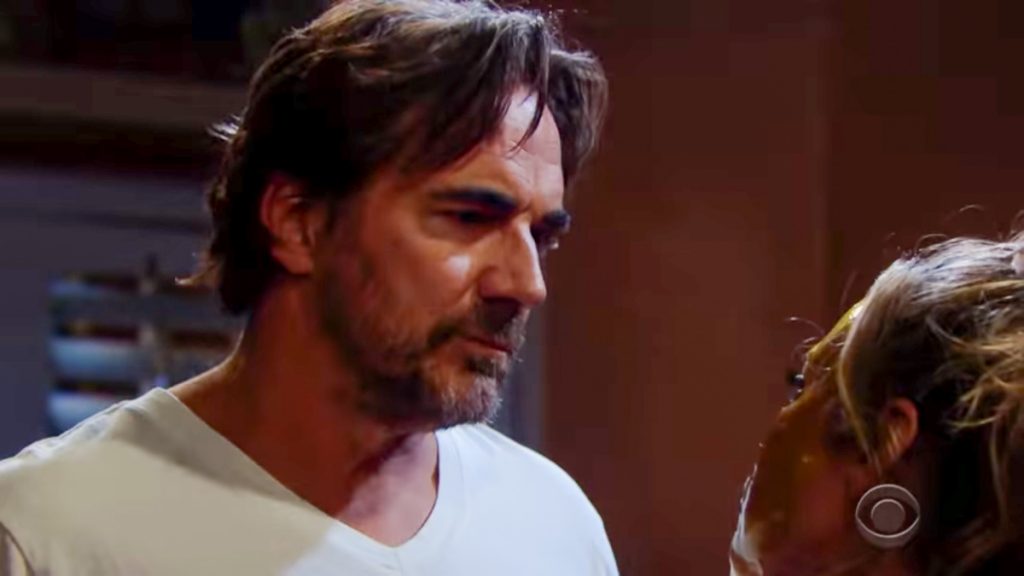 Of course, this is happening after a huge scene at Brooke’s mansion. As B&B viewers will remember, Ridge and Thomas rushed to Brooke’s place to extricate Douglas and return him to Thomas after it came out that Brooke had adoption and termination-of-parental-rights papers drawn up. Ridge about hit the roof and decided that enough was enough.

Well, Ridge will probably be in need of his father’s counsel after going through that ordeal, and Eric will do his best to reassure his son that everything will be ok. According to B&B spoilers, during their conversation, Ridge will note the similarities between what’s currently going on in family to what went on years ago between Brooke and Stephanie Forrester (Susan Flannery). He’ll think that history seems to be repeating itself, since Brooke has such terrible feelings of animosity toward Thomas.

Of course, from Ridge’s perspective, he has to do everything that he can for his son. He certainly loves Brooke, but when she’s acting so terribly toward his own flesh and blood, he can’t just turn a blind eye. He certainly doesn’t want to see a big Logan/Forrester war, but he’s not going to allow Hope Logan (Annika Noelle) and Liam Spencer (Scott Clifton) to raise his grandson just because they say it’s a good idea.

Next, on Monday’s new episode of B&B, Ridge will get a huge surprise. He’ll go to get settled into his new living quarters on the Forrester property, which will be at the guesthouse, but he’ll find someone sleeping in his bed. Needless to say, this will come as a shock, and he’ll be even more shocked when he realizes that the person is Shauna Fulton (Denise Richards).

Exactly how Shauna comes to be sleeping in the bed in the guesthouse remains to be seen, but it’s likely that she’ll have been visiting with her friend Quinn and somehow made it into the guesthouse for a nap. However it happens, B&B spoilers say that she’ll be right there in Ridge’s bed, and it looks like some comedic moments will ensue from there as they both try to figure out what’s going on.

The two will chat, and Ridge might end up telling Shauna about the terrible scene that unfolded earlier with Brooke. At any rate, it’s likely that Shauna will realize that things between Ridge and Brooke are pretty bad if he’s moving into the guesthouse. As they talk, one thing will lead to another and the two will wind up in a big kiss. It appears that Shauna will initiate the kiss, but that Ridge will kiss her right back.

This just might start the beginning of a new chapter for Ridge, as he’ll probably be forced to admit to himself that he’s attracted to Shauna. She’s certainly interested in him, which is something that she’s made very clear. But will Shauna now openly pursue Ridge? Time will tell, but it’s probably pretty likely that she’ll pull out all the stops from here on out.