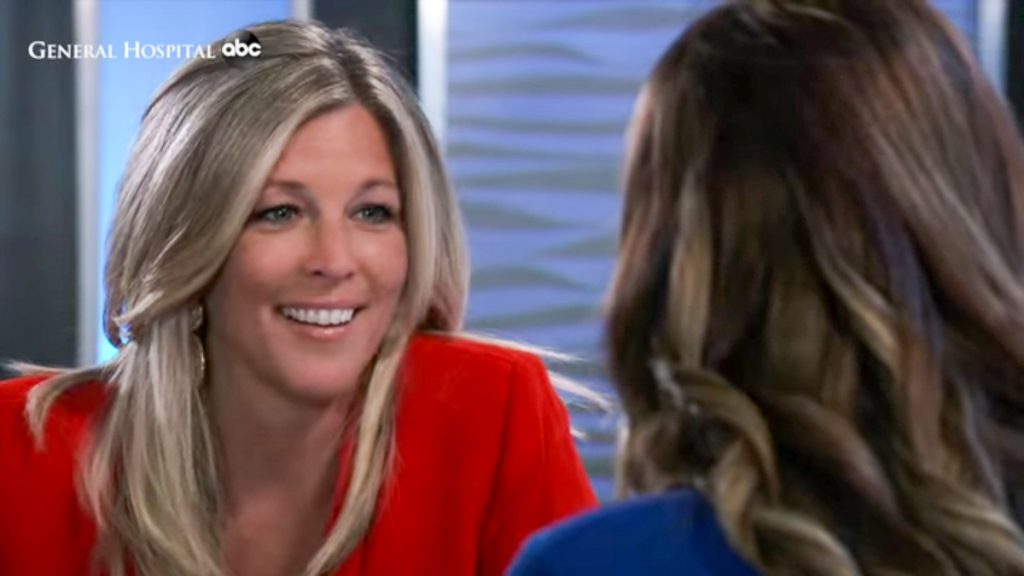 General Hospital spoilers for Wednesday, October 23 tease another exciting day of drama for General Hospital fans as one family’s baby comes home, one Port Charles resident finds out he has one a few years old, and two women fight over one man’s identity!

At General Hospital, Carly Corinthos (Laura Wright) talks to her mother, Bobbie Spencer (Jacklyn Zeman) and tells her whatever the unknowns might be, she’s never been more prepared to face them! She must be talking about the newest Corinthos as it looks like little Donna Corinthos (Ella and Emma Hulen) is ready to come home!

Dr. Hamilton Finn (Michael Easton) is shocked! He has been suspicious that his former fiancée, Hayden Barnes (Rebecca Budig) was keeping something from him, that something being the baby that he thought she miscarried but has been finding more and more evidence that she didn’t! Now the truth is staring him in the face as a new patient has been brought to General Hospital, a little girl. He was called in to work on an emergency basis, apparently because of his specialty as an infectious disease expert. He encounters Hayden, who no-showed him for breakfast, outside the little girl’s room where she tells him that the patient is their daughter! Finn is shocked as he asks her again, “You’re saying that the little girl sick in that room is our daughter?”

At the Corinthos house, the family is gathered around a bundle dressed in pink and lying in a white bassinet looking on admiringly. Bobbie stands in the background, as Michael Corinthos, (Chad Duell) Josslyn Jacks, (Eden McCoy) Avery Corinthos, (Ava and Grace Scarola) look into the bassinet and proud mama and papa Carly and Sonny Corinthos (Maurice Benard) look on from the side. Avery has a big smile on her face as someone tells her to meet her new sister! (No, Avery, she’s not a doll!)

Elizabeth Baldwin (Rebecca Herbst) appears to be feeling sorry for Kim Nero (Tamara Braun) although she is firm when she tells her she wishes there had been another way! Kim wants to hang onto pre-2012 Andrew Cain’s (Steve Burton) memories and personality that are now living in Elizabeth’s husband, Franco Baldwin’s (Roger Howarth) body! But Kim’s in love with a ghost; the real Drew Cain (Billy Miller) has just been declared dead by the Navy, and the two women cannot share the same man.

Either a make-believe Drew stays in Franco’s body or Franco comes back through Dr. Andre Maddox (Anthony Montgomery) trying to do a memory reversal to bring Franco back to himself mentally. Even the real Drew would have wanted that, rather than have him be a receptacle for his old memories at the cost of losing himself!

At the courthouse where Franco’s competency hearing is being held, Martin Gray (Michael E. Knight) is confident as he hands a file of evidence over to the hearing magistrate, declaring that Franco Baldwin no longer exists and although his body is present, his soul and everything else that matters is Drew Cain!