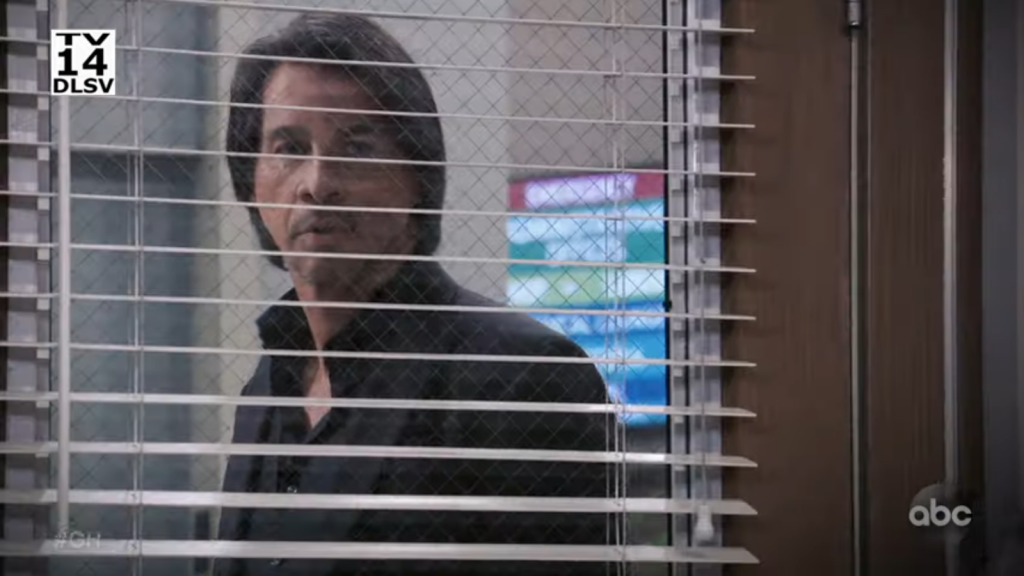 Welcome to your Monday October 21st General Hospital (GH) recap! We begin our day at the police station where Felicia Jones (Kristina Wagner) is telling Robert Scorpio (Tristan Rogers) that Anna has made progress looking for her sister Alex. Though she is worried that Anna is going to be gone longer and wonders if he can change that.

At General Hospital (GH), Curtis Ashford (Donnell Turner) meets up with Hamilton Finn (Michael Easton) who asks him how much he knew about Hayden’s time away.

At the coffee shop, Elizabeth Webber (Rebecca Herbst) and her sister Hayden Barnes (Rebecca Budig) discuss how the hearing is in a few days. Hayden doesn’t appear to be listening and says sorry she has a lot on her mind as well.

General Hospital Spoilers – Sasha Gilmore worries she is a pariah

At the metro court restaurant, Michael Corinthos (Chad Duell) and Sasha Gilmore (Sofia Mattsson) walk in as she worries she is the town pariah. He says all will be fine until they spot his mom. Carly asks Michael to take baby Donna’s gifts from her staff, to the car.

As soon as Michael walks away – Carly lays into Sasha that she is a con artist and only interested in Michael’s bank account.

GH Spoilers – Nina Reeves jumps back into her Crimson work

At the Crimson offices, Nina Reeves (Cynthia Watros) is working away when a surprised Jasper Jax (Ingo Rademacher) stops in. He wonders why she is there and what has happened with Valentin. Jax asks Nina to grab dinner with him and she says he has deadlines.

Valentin shows up and Jax tells him to leave and that he is going to call security. Jax is livid that Nina is believing Valentin’s lies.

At the PCPD, Felicia tells Robert that she is worried that the long distance is going to affect her engagement to Finn. Felicia asks Robert to at least reach out to Anna and try to convince her to come home.

Finn asks Curtis about if he knows what Hayden Barnes (Rebecca Budig) was up to when she left town, he says he has no idea. Curtis says that besides her time in Rome, he has no idea where she was staying. Curtis wonders why he is asking so much about Hayden and Finn tells him he thinks the baby is still alive.

At General Hospital (GH) , Julian Jerome (William DeVry) has brought in his sister Ava Jerome (Maura west) who fainted at the Metro Court. Ava says she is probably dehydrated, but Lucas insists she get checked out.

Lucas asks about her drink intake and she admits she has been indulging. Shes especially upset to find out that Ryan killed his cell mate for her. Dr Byrne stops to check on her and wonders if theres anything else going on – Ava says shes being followed.

At General Hospital (GH) , Brad Cooper (Parry Shen) receives a bunch of flowers from a secret admirer, Lucas Jones (Ryan Carnes) wonder who they could be from. Brad has no idea where the flowers came from and Lucas flashes back to the dream Brad had where he called out Michael’s name.
Julian asks Brad where the flowers are from, maybe they are from his sidepiece?

Hayden asks Elizabeth how she is coping with everything, Liz says its been very difficult. Hayden talks about enjoying time with Liz’s boys and being a fun Aunt. Liz wonders is she wants to try again to have a baby and that she would make a wonderful mother.

Carly says to Sasha that they may have more in common than she realizes. She says that we all make mistakes and we can grow from these experiences.

Brad throws away the flowers, but Lucas is still very suspicious. Felicia reminds Robert that the strain of distance ruined her marriage to Frisco.

Ava says the monster who killed her daughter, has killed again for her and she’s horrified. She goes home and locks up, we see she has a gun by her bedside…….flash to preview