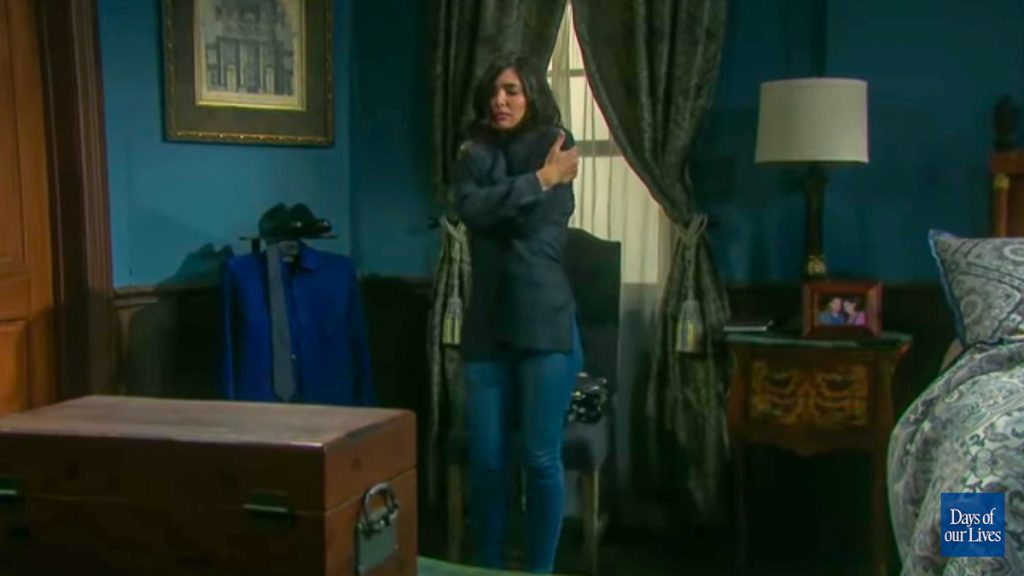 Lani Price (Sal Stowers) and Eli Grant (Lamon Archey) plan their wedding. Days of Our Lives viewers will recall that originally they had planned for the wedding to be at Doug’s Place with Eli’s grandmother Julie Williams (Susan Seaforth Hayes) officiating but had to modify their plans because of her heart transplant.

In the Days of Our Lives fall preview video, the wedding is shown; Dr. Marlena Evans (Deidre Hall) will officiate, and in the audience, the back of Maggie Kiriakis’ (Suzanne Rogers), Sarah Horton’s (Linsey Godfrey), Xander Kiriakis’ (Paul Telfer), Sonny Kiriakis (Freddie Smith), and Will Horton’s (Chandler Massey)heads can be seen. Lani’s mother, Tamara Price (Marilyn McCoo) will also attend, which will be the first time Days of Our Lives viewers have seen Tamara since 1987!

Gabi Hernandez DiMera (Camila Banus) has plans to end Lani and Eli’s happiness. She forms a plot in her mind, which she thinks will be perfect. She thinks to herself, why should the woman who killed her husband, Stefan DiMera (Brandon Barash) ever be happy? As far as Gabi is concerned,

Lani has destroyed her life as well with her gunshot. It doesn’t matter to Gabi that it was an accident, or that Stefan jumped in front of his mother, Vivian Alamain (Robin Strasser) and just happened to get himself in the wrong position at the wrong time, colliding with the bullet, which hit his carotid artery, causing him to nearly bleed out! She decides she is going to try and force Lani to dump Eli at the altar during their wedding.

Justin Kiriakis (Wally Kurth) meets Adrienne Kiriakis (Judi Evans) at the nicest restaurant in town to propose to her – again! This makes the fourth – or is it the fifth? – time trying marriage between the two. Perhaps the writers are trying to have Justin and Adrienne compete with that other oft-married couple on that other soap opera Wally Kurth also appears on? However, as seen in the most recent Days of Our Lives weekly preview, there is an interruption by someone who under other circumstances, would be perfectly welcome to join in!

Actually, there are two someones; Justin and Adrienne’s son, Sonny Kiriakis (Freddie Smith) and his husband, Will Horton (Chandler Massey)! Sonny and Will approach Justin and Adrienne’s table just as Justin is about to pop the question, and Sonny asks his father what he is doing! Justin looks up with a decided air of annoyance on his face, and sarcastically asks Sonny, “What do you THINK I’m doing?!” And here the two parents thought that maybe the interruptions ended after Sonny was out of diapers, walking, talking, and married himself!