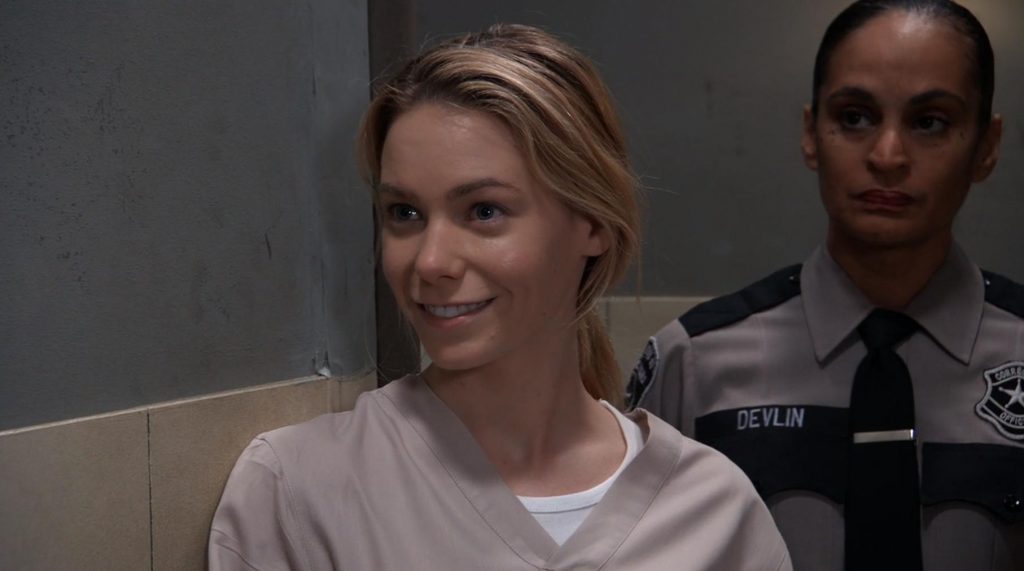 General Hospital spoilers for Wednesday, October 16 tease another episode of exciting drama, suspense and confrontations among the Port Charlesites for General Hospital fans!

Alexis Davis (Nancy Lee Grahn) is having a bite to eat when all of a sudden she sees someone she doesn’t want to see, and exclaims to herself, “Oh God, there she is!” Perhaps she’s eating something her trainer wouldn’t approve of and she sees Kendra Lennon (Michelle Argyris) heading her way!

Alexis may be getting in way over her head with this training program, especially since, as viewers know, Kendra’s up to no good. Again Shiloh Archer (Coby Ryan McLaughlin) is having an effect from beyond the grave, having put Kiefer Bauer’s (Christian Alexander) older sister in Alexis’ path before he died!

Lulu Spencer (Emme Rylan) and Maxie Jones (Kirsten Jones) gets into an argument, and it sounds like it’s about Sasha Gilmore (Sofia Mattsson) and Nina Reeves (Cynthia Watros) finding out the truth that Sasha is not her long-lost daughter. Lulu is borderline irate as she says to Maxie, “Are you saying that you wouldn’t have told her the truth?” Maxie is probably thinking about Nina’s broken heart and that Sasha had not been out to hurt anyone and so far hadn’t pulled any scams for Nina’s money.

But Lulu has that self-righteous crusader side to her, and any lie, whether the truth destroys someone and their life or not, the truth means more than a life destroyed and a heart broken – as long as Lulu’s the one doing the truth telling for the other person’s own good!

Nina, who has reconciled with Valentin Cassadine (James Patrick Stuart) for the time being, has some hard questions for him; she doesn’t understand why he wouldn’t want to see Sasha punished! Valentin had told her most of the truth – up to a point. He didn’t tell her that he paid Sasha to play her long-lost daughter. Valentin appears to be at a loss for words; perhaps he should not have thrown Sasha under the bus after all and just spun it that the lawyer deceived both him and Sasha – but then, Sasha didn’t throw the lawyer under the bus either! It will be interesting how Valentin wiggles his way out of that one!

GH Spoilers – Lucas Jones Has A Talk With Julian Jerome

At Charlie’s Pub, Lucas Jones (Ryan Carnes) has a talk with Julian Jerome (William DeVry) about his husband, Brad Cooper (Parry Shen). Lucas tells Julian that he wishes what was going on inside that head of his, referring to Brad! General Hospital viewers know that Lucas had better be careful what he wishes for, because he doesn’t really want to know!

Nelle Benson, (Chloe Lanier) Michael Corinthos, (Chad Duell) and Brad appear to be in the judge’s chambers prior to Nelle’s parole hearing, as Nelle delivers a zinger right in front of Brad – she tells Michael it’s time that he knows the truth! In the weekly preview, “Big October” it shows Michael slamming Brad into the wall, so it sounds like Nelle’s throwing Brad under the bus!