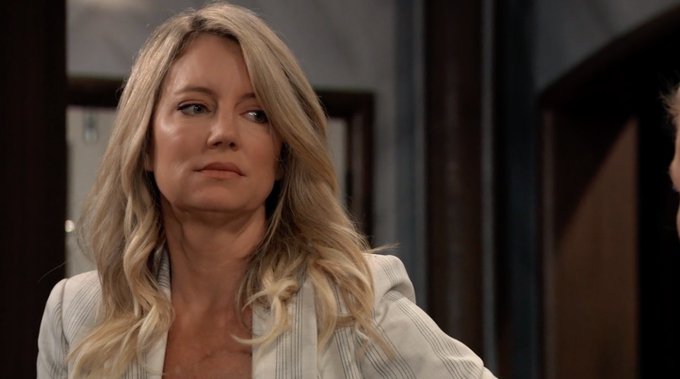 Welcome to your Monday October 14th General Hospital (GH) recap! We begin our day at Wyndemere where Valentin Cassadine (James Patrick Stuart) is looking in a safe that contains a lot of cash and his passports. Liesl Obrecht (Kathleen Gati) walks in the room and asks what he is doing. Liesl says he ruined her life and wants to know if Nina really miscarried or is her child still alive?

Near the Port Charles docks, Peter August 9wes Ramsey) meets with an unknown woman who is collecting “payment.” He says he hopes she under stands what needs to be done.

At the PCPD, Harrison Chase (Josh Swickard) questions the prisoner who implicated Sam in breaking Shiloh out of prison. Jordan Ashford (Brianne Nicole Henry) tells the guy that he better lose the attitude, suddenly a woman comes in saying she is his lawyer. This is the same woman that Peter paid off on the pier.

The lawyer asks the prisoner to get the rest of his story straight, if they are going to proceed. Jordan takes his statement as he lies about Sam hiring him to get Shiloh out of prison.

Sam begins crying as she realizes that Drew is gone forever.

Also at General Hospital (GH), Kim Nero (Tamara Braun) rounds a corner and runs into Elizabeth Webber (Rebecca Herbst). Kim says shes here to get her job back part-time and questions whether Franco being committed is a good idea. Liz reminds Kim that she is holding Franco for his own good

Kim says that she is the one who connected Franco with the lawyer Martin Gray (Michael E Knight). Liz realizes that Kim is paying for the lawyer and brings up that she refused to let Oscar make his own medical decisions.

In Franco Baldwin’s (Roger Howarth) hospital room, Julian Jerome (William DeVry) has made a surprise visit. Julian says if Franco wasn’t locked up he would lay him out flat for sleeping with Kim. Julian says hes actually known Kim a lot longer than “Frankendrew” has.

At Crimson magazine, Maxie Jones (Kirsten Storms) questions where Nina Reeves (Cynthia Watros) has been hiding out. Nina say she was staying with Jasper Jax (Ingo Rademacher) and he comforted her. Nina says her heart has been demolished and shes not totally sure what to believe.

Nina wonders if what Lulu said is maybe not true and Sasha was in on the plan on her own.

At Wyndemere, Valentin is pulling together his luggage to go to Greece as Liesl questions him. Valentin says that according to Madeline, the baby was never miscarried, it was born and adopted out. Liesl

General Hospital Spoilers – Peter August is up to no good

Peter meets up with Andre Maddox (Anthony Montgomery) at Charlie’s Pub to discuss their past. Peter asks Andre if he has heard from his mother Anna and her whereabouts. Peter wonders if a mind mapping reversal would actually work. Andre is not so sure that the procedure would work and has no idea who’s memories he would ultimately end up with.

Carly and Sonny discuss how sad it is that Drew is now dead and his children don’t have a father. They go in the nursery and visit baby Donna who is happy and healthy.

Jordan summons Sam back to the police station where is promptly arrested.

Valentin packs his things and tells Liesl that he respects her. She is going to Switzerland to let Nina get over the pain she has caused.

Julian tells Franco that Kim is grieving so deeply she has no idea what she is doing. Nina goes to Wyndemere as her and Valentin face off ….flash to preview