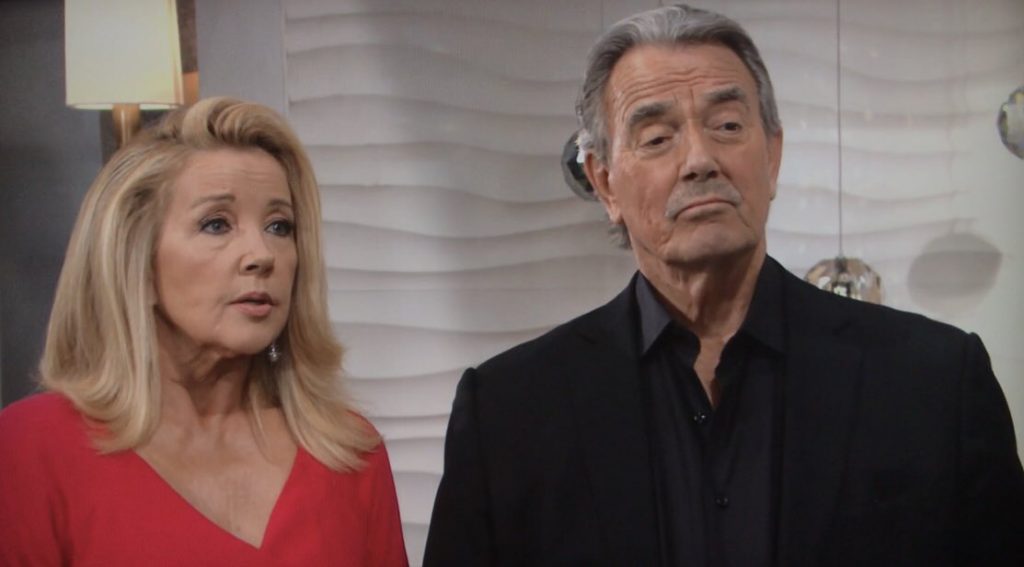 The Young and the Restless spoilers for Wednesday, October 16, tease that Victoria Newman (Amelia Heinle) will be working at Newman Enterprises when Nikki Newman (Melody Thomas Scott) arrives and notices that Victor Newman’s (Eric Braeden) portrait has been fixed. Victoria will be feeling optimistic about her relationship with Victor, and Nikki will give her a new handbag to thank her for convincing Victor to step away from the job. They’ll discuss Adam Newman (Mark Grossman) a bit as well – Nikki will think that Adam can’t touch them now if they don’t let him.

Next on Y&R, Billy Abbott (Jason Thompson) will go to the Newman Ranch to talk with Victor. Victor will say that Adam accused him of trying to run him down with a car. Billy will not deny that it was him, and he’ll say that he regrets it. They’ll go back and forth a bit, with Victor saying that the whole thing led to Adam altering his meds, and Billy will ultimately explain why he did it. Victor won’t be entirely happy with the situation, but he’ll be glad that Billy took responsibility for what he did, and that he’ll give him another chance as he gave Adam one.

Later, Billy will stop by Newman Enterprises to see Victoria and to tell her about his chat with Victor. They’ll believe that all of the bad things are behind them now and that they are stronger with each other.

Next on Y&R, at Society, Theo Vanderway (Tyler Johnson) will try to make nice with Abby Newman (Melissa Ordway), who won’t want to talk to him. She’ll go to the kitchen, where Lola Abbott (Sasha Calle) will be feeling light-headed. After a food smell makes her nauseated, Abby will ask if she could be pregnant. Lola will say that she and Kyle Abbott (Michael Mealor) have been careful. They’ll then chat a bit about Abby’s relationship with Nate Hastings (Sean Dominic) and how he feels about her family.

Later, Lola will interact a bit with Theo, then she’ll feel faint. Worried, Theo will call Kyle, who will be grateful that Theo was there and looked out for Lola. Theo will tell Kyle that he’s been an ass and that he misses their friendship. Kyle will say that perhaps they can grab a beer sometime. As they leave, Lola will tell Kyle that they need to stop by a pharmacy.

Next on Y&R, Devon Hamilton (Bryton James) and Elena Dawson (Brytni Sarpy) will enjoy each other’s company in their Grand Phoenix room. Meanwhile, in the lobby, Nate will bump into Amanda Sinclair (Mishael Morgan) and the two will end up playing pool together. He’ll fish for information about her while offering some info about himself. She’ll accuse him of spying on her for Devon, and that she has nothing to hide.

Abby will then show up and apologize to Nate for their last conversation and the way she spoke to him. He’ll apologize, too, but he’ll say that the issues between them are real. They’ll discuss the situation with Victor’s death ruse, and Nate will say that they are just too far apart. Abby will think that he’s ending things. He’ll tell her to take care of herself and leave.

At their apartment, Kyle and Lola will await the results of a home pregnancy test, and they’ll muse that they were just taking about what their baby would look like, and now they’re taking a pregnancy test. Finally, the timer will go off, and the result will be negative – they’ll both be relieved but disappointed. Kyle will then have an office situation and leave for work. Theo will then text to see if she’s ok, and he’ll tell her to look outside the door – he’ll have left chicken soup for her.

Who is the OLD JERK Amanda is talking about on #YoungandRestless?

Vote in our poll below ⬇️⬇️⬇️⬇️https://t.co/WwTn9VlYws

Finally, on Wednesday’s new episode of Y&R, Elena will see Amanda at Crimson Lights and wonder what she’s still doing in Genoa City. She’ll say it’s disgusting what she’s been doing to Devon. Amanda will say that she can’t wait for this case to be over and that she never should have let ’that old jerk” get her into this. Devon will overhear this and say that she can’t mean Chance Chancellor (John Driscoll), so who is she referring to? Amanda will try to cover and say that Chance sounded like an old jerk on the phone.