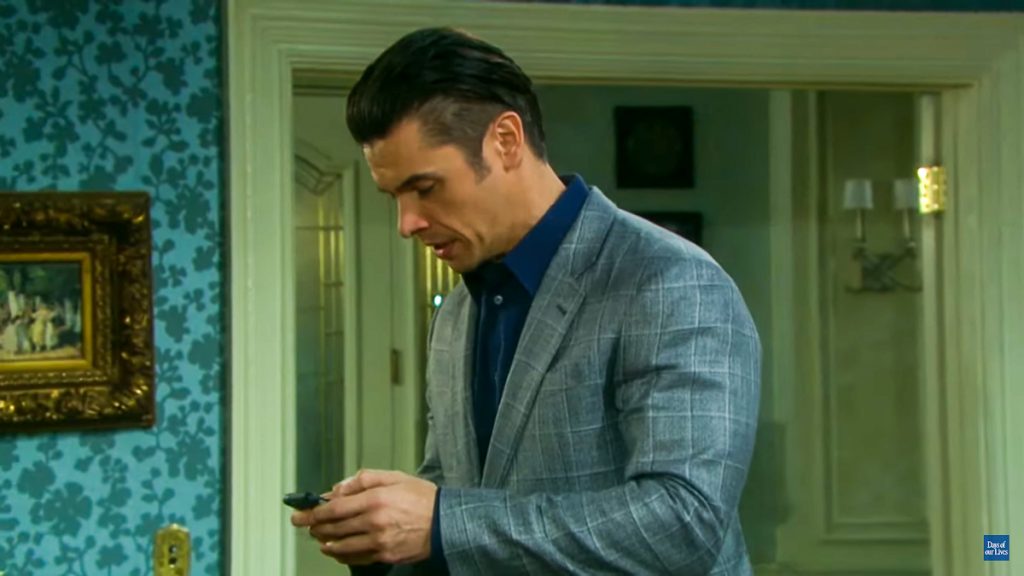 Ben Weston (Robert Scott Wilson) and Rafe Hernandez (Galen Gering) get new information about Ciara Brady’s (Victoria Konefal) near hit and run outside Brady’s Pub. Ciara barely missed being run over by a car that obviously aimed for her but it was dark and she couldn’t see who was driving. Ben has been sure that it was his sister Jordan Ridgeway (Chrishell Hartley) who was aiming for Ciara, based on her past psychotic behavior and attempts on Ciara’s life. Up till now, he has not been able to prove it. Will the new information prove Ben’s theory or clear Jordan?

Meanwhile, Victor Kiriakis (John Aniston) orders a hit on Jordan, after Ben talked to him about eliminating his sister in previous episodes. However, Ben didn’t want her killed, just taken out of the area. Ben is desperate for his girlfriend Ciara to be safe, and Victor is her grandfather. Victor tried to kill Ben not that long ago, fearing the same thing of Ben that Ben fears of Jordan, that she is not as sane and healed from her psychosis as she claims; and would have, had it not been for Brady Black’s (Eric Martsolf) intervention! Perhaps Victor intends to kill two birds with one stone by having Jordan killed and framing Ben for it!

Gabi Hernandez DiMera (Camila Banus) remains grief stricken over her husband Stefan DiMera’s (Brandon Barash) death. She finally made the extremely difficult decision to take him off life support so Julie Williams (Susan Seaforth Hayes) could have his heart. This was after things got really ugly and she told Lani Price (Sal Stowers) who was trying to convince her to donate Stefan’s heart to Julie, to get down on her knees and beg, which she did! Suffice it to say Lani and Gabi aren’t the best of frenemies!

Xander Kiriakis (Paul Telfer) tries to convince Nicole Walker (Arianne Zucker) to keep her mouth shut after regretting his previous actions. As viewers will recall, Xander gave Dr. Wilhelm Rolf (William Utay) an envelope to deliver with a copy of Sarah Horton’s (Linsey Godfrey) pregnancy results in it and it was too late to retrieve them before Nicole opened it and found out about Sarah’s pregnancy, and Xander doesn’t want Sarah to know that he is the one who gave the information! He thought if Eric Brady (Greg Vaughan) knew Sarah is pregnant with his child he would be able to keep her in Salem, but then Xander visualized all kinds of scenarios that could take place and none of them all that good for him!