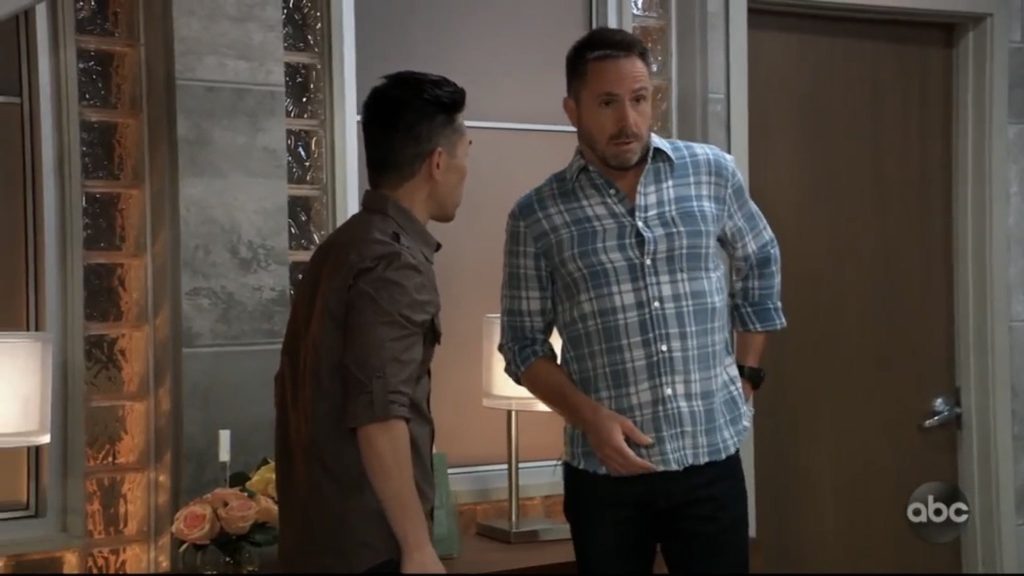 General Hospital (GH) spoilers for Tuesday, September 17 tease another episode of exciting drama and explosive confrontations for the viewers.

At General Hospital, Brad Cooper (Parry Shen) questions Julian Jerome (William DeVry) about his wanting to eliminate Liesl Obrecht (Kathleen Gati) for good! General Hospital viewers will recall that in Monday’s episode, Julian started to cut Liesl’s brake lines, then started to think about Kim Nero (Tamara Braun) and all the times that she wanted to be sure that he had left the old criminal activities and mob life behind forever!

He appeared to try to put that out of his mind and continue to cut her brake lines, but then he got the text from Brad telling him Liesl was on her way to her car and he ducked out of there. Brad wants to know now if it’s over since Julian had said he did what he needed to do! But is it what Brad thought he needed to do or are they talking about two different things?

Elsewhere at General Hospital, Michael Corinthos (Chad Duell) is upset, having just listened to Sasha Gilmore’s (Sofia Mattsson) confession that she is not Nina Reeves’ (Cynthia Watros) daughter and her explanations of why she did what she did; he implied that he and Sasha are finished when Nina and Valentin Cassadine (James Patrick Stuart) came into the supply room where he and Sasha had been talking.

Willow notices him upset and takes concern, asking him if everything is ok. Will he talk to her, or brush her off like he did her boyfriend, Detective Harrison Chase (Josh Swickard) earlier? Maybe Michael just needs time and space to think – after all, someone who confesses to having made bad decisions and is hurting over it is a lot different than just a lying liar who lies and doesn’t care!

Meanwhile, Sasha is angry at Valentin when he tries to show his concern! She is determined to talk to Nina alone and tell her the truth, and she tells him angrily to mind his own business and stay out of hers! Then Nina walks up and asked if she missed something! Unfortunately, as General Hospital viewers know, Nina is missing a lot and Sasha wants to fill her in; but will Valentin let the two women have some privacy, and will Sasha lose her nerve and not tell Nina the truth?

Onboard the Haunted Star, Curtis Ashford (Donnell Turner) tries to negotiate with someone while Laura Collins (Genie Francis) looks on, telling the person they should join forces and share information.

Other General Hospital spoilers tease this will be Cassandra Pierce (Jessica Tuck) who Curtis and Laura found hiding in a closet, and who will hold a gun on the two but they will turn the tables on her and bring her into the Port Charles Police Department!

General Hospital Spoilers: Trouble Aboard The Haunted Star; Sam Rushes To Investigate, But Is It A Trap? https://t.co/2yCfQpKJzZ

Back at GH, Dr. Hamilton Finn (Michael Easton) has some questions for Dr. Andre Maddox (Andre Montgomery) regarding memory transfer. He asks Andre straight out if he can reverse the process or not, wanting to know if Franco Baldwin (Roger Howarth) will ever be himself again!

Meanwhile, elsewhere at GH, Finn’s younger brother Chase has some information for Elizabeth Baldwin (Rebecca Herbst). He tells her he has something he needs to tell her about her husband, Franco.

At Kim’s apartment, Kim finally gives in to “Frankendrew” otherwise known as Franco with pre-2012 Andrew Cain’s (Steve Burton) memories and personality and they make love! Other General Hospital spoilers tease that Liz will walk in and catch them with their pants down!