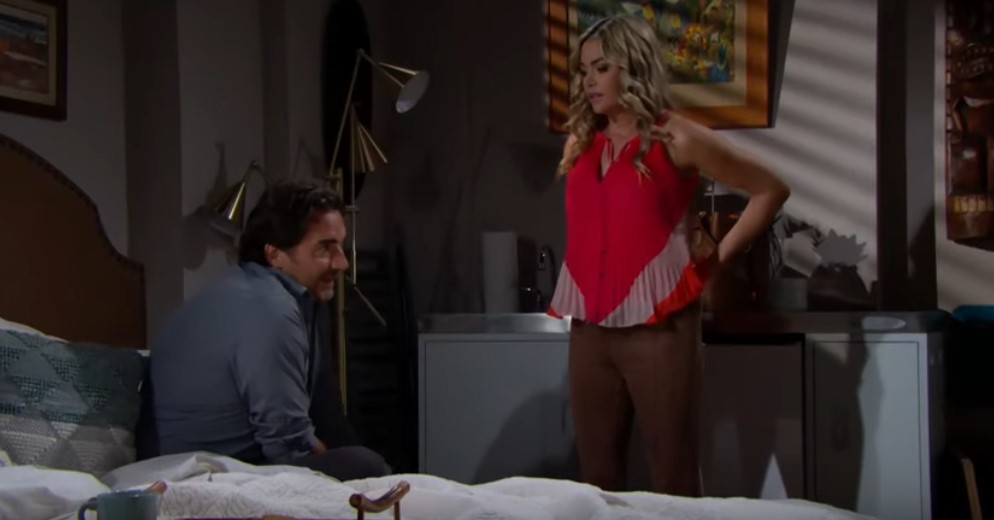 The Bold and the Beautiful (B&B) spoilers for Tuesday, September 17, tease that Katie Logan (Heather Tom) will finally get the chance to unleash on the woman who brought so much pain to her niece, Hope Logan (Annika Noelle). As B&B viewers know, Katie is very close to Hope, and she’s witnessed firsthand just how crushed Hope was when she and everyone else believed that her daughter Beth Spencer (River Davidson and Madeline Valdez) had died. Hope had a terrible time with her grief, and Katie was unable to ease her pain.

Well, on Tuesday’s B&B episode, Katie will come face to face with one of the people who caused Hope so much pain…Flo Fulton (Katrina Bowden). As B&B viewers know, Flo has recently been released from jail on an immunity deal, so she’s a free woman now. It looks like Katie will bump into Flo somewhere, and it will outrage her that Flo got away with what she did. But while Flo might want to avoid a confrontation, Katie will be all over her.

According to B&B spoilers, Katie will seriously lash out at Flo. She’ll probably want to know how Flo – as a Logan – could have kept such a horrible secret from Hope. She may point out that Flo could see how much Hope was suffering, and yet she continued to keep the secret that Beth was alive. It looks like Katie will get pretty upset and there will be absolutely no secret about how outraged she is at her brother Storm Logan’s (William deVry) daughter.

In fact, Katie will be so distraught that she’ll rage at her niece, telling her that she’s not welcomed in the Logan family, nor in Los Angeles. Flo may try to protest or get a word in edgewise, but it doesn’t look like Katie will be having any of it, and she’ll just keep fuming at Flo. Katie will get pretty worked up, which isn’t good for her, considering her history of serious heart problems and heart attacks.

B&B spoilers say that Katie will ultimately wind up collapsing, but whether that happens as a result of her scene with Flo remains to be seen. But ongoing B&B spoilers do indicate that Katie will suffer some serious health complications soon and that it will be something that she and Bill Spencer (Don Diamont) will have to face together, so B&B viewers will want to stay tuned to catch all the action.

Next, on Tuesday’s new episode of B&B, Ridge Forrester (Thorsten Kaye) will realize that it’s time to head home and face the music with Brooke Forrester (Katherine Kelly Lang). As B&B viewers know, he spent the night with Shauna Fulton (Denise Richards) after a bender at Bikini Bar. Shauna helped a stumbling Ridge up to the bedroom above the bar, removed some of his clothes, and stayed the night with him.

Of course, nothing intimate actually happened between the two, but the whole thing is something that Ridge would really like to keep between just the two of them. According to B&B spoilers, the two will enter into a pact to keep their night together a secret, and Ridge will go on his way and prepare to face Brooke at home.

Ongoing B&B spoilers indicate that Brooke and Ridge will ultimately make up and find a way to get past the serious issues in their marriage. Brooke received a bit of advice and encouragement from Eric Forrester (John McCook), and Ridge seems to have calmed down quite a bit as well, so it looks like he and Brooke will be able to regroup and work through their issues surrounding Thomas Forrester (Matthew Atkinson).

Of course, that won’t be easy, given that they don’t see eye to eye when it comes to Thomas or what kind of relationship he should have with his son Douglas Forrester (Henry Joseph Samiri) going forward. But at least it looks like they’ll be able to face the issue head-on and without the distraction of arguing over Ridge’s night with Shauna…which is something that Ridge hopes Brooke never finds out about.