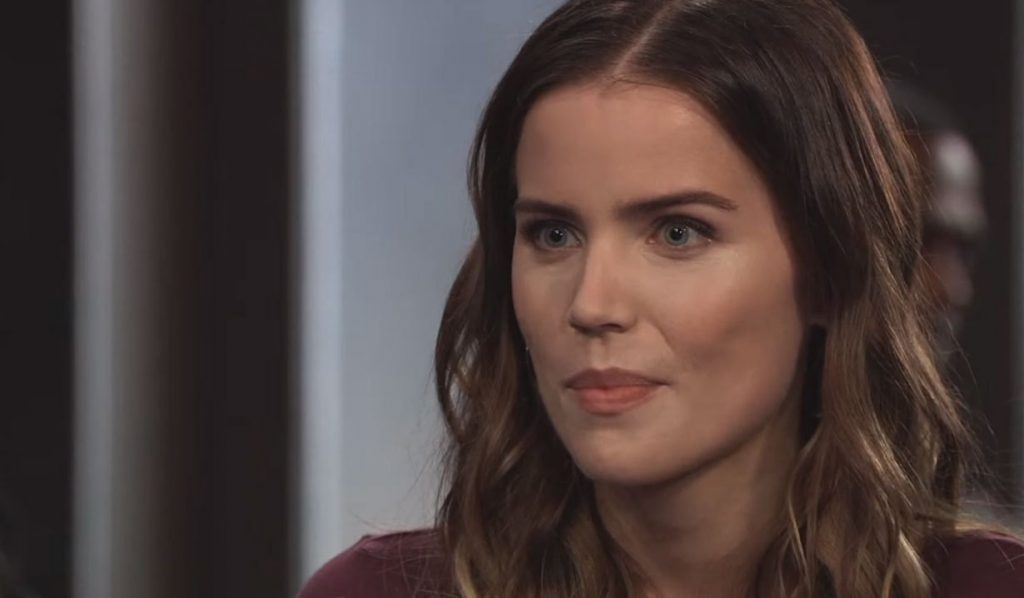 General Hospital (GH) spoilers tease that there will be five key takeaways for the viewers to look for the week of September 20.

Sasha Gilmore (Sofia Mattsson) will risk blowing up not only her increasingly serious relationship with Michael Corinthos (Chad Duell) but also with Nina Reeves (Cynthia Watros)! She could even face some retribution from Valentin Cassadine (James Patrick Stuart) if her confession blows up his and Nina’s relationship as well! Michael indeed will be shocked and disappointed, but Sasha just can’t live with this guilt anymore, and can’t continue to live a lie that envelops her whole life!

Later in the week, Willow Tait (Katelyn MacMullen) will see that Michael is upset and offer a shoulder to cry on and a friend to talk to, but he may not want to talk about this and decide to handle things on his own, and lays out a plan.

Cassandra Pierce (Jessica Tuck) is discovered in Port Charles hiding in a closet on the Haunted Star, after Laura Collins (Genie Francis) and Curtis Ashford (Donnell Turner) leave from accidentally embarrassing Laura’s daughter Lulu Spencer (Emme Rylan) and her brand new lover Dustin Phillips (Mark Lawson) by walking in on them making love in a stateroom!

General Hospital spoilers state that Cassandra will hold a gun on Laura but Laura and Curtis turn the tables on her, grabbing the gun away and taking her to the Port Charles Police Department, but not before Cassandra tries to make a strange deal with Laura, offering to help her take down Valentin Cassadine (James Patrick Stuart) for good!

Kim Nero (Tamara Braun) will finally give in to Franco Baldwin (Roger Howarth) otherwise known as “Frankendrew” after he was implanted with pre-2012 Andrew Cain’s (Steve Burton) memories and personality, and apparently his love for Kim! Kim is a mess after hearing the real Drew Cain (Billy Miller) has disappeared and is presumed dead, and finally gives in to all she has left of him which is only in Franco’s brain!

Before that happens though Detective Harrison Chase (Josh Swickard) will remove his ankle monitor, and unfortunately for Franco’s wife, Elizabeth Webber Baldwin (Rebecca Herbst), Chase tells her where to find Franco and she comes over to Kim’s apartment and catches the two with their pants down!

The search for the truth about Drew Cain’s plane crash and Andre Maddox’s (Anthony Montgomery) attempted murder continues, as Jason Morgan (Steve Burton) is perplexed. He knows if Shiloh Archer (Coby Ryan McLaughlin) is behind it he has to have an accomplice on the outside, since being in prison is the best alibi anyone can have!

He will bring Damian Spinelli (Bradford Anderson) in on the search, and as Shiloh testifies in his own defense in court, Jason will become more uneasy. Also possibly related to the subject of Drew’s disappearance and Andre’s stabbing, Shiloh makes a critical phone call and Peter August (Wes Ramsey) is anxious to wrap things up!

Brad Cooper (Parry Shen) continues to keep the Wiley Cooper-Jones (Erik and Theodore Olson) baby swap secret, although as viewers know, he did confess everything to an angry Julian Jerome (William DeVry) last week; Julian did not appreciate being tricked into being an accomplice to Sonny Corinthos’ (Maurice Benard) grandson, Jonah Corinthos’ kidnapping, and will make a bold decision this week which may be to no longer help Brad with this issue, and he will explain his reticence to stay involved.

Meanwhile, Liesl Obrecht (Kathleen Gati) will request a favor from Brad in exchange for her continued silence regarding the baby swap secret; she will tell Brad he has to fix things between Liesl and her daughter Britt Westbourne (Kelly Thibaud) and reunite the two of them!

That’s all for this week’s Five Key Takeaways from this week’s GH. Stay tuned to the show and keep checking General Hospital (GH) spoilers frequently for all the latest news, updates and developments!

Days of Our Lives Spoilers: Sarah Plans To Get Abortion — Kristen Has Dr. Rolf Prepare for ‘Unusual Procedure’