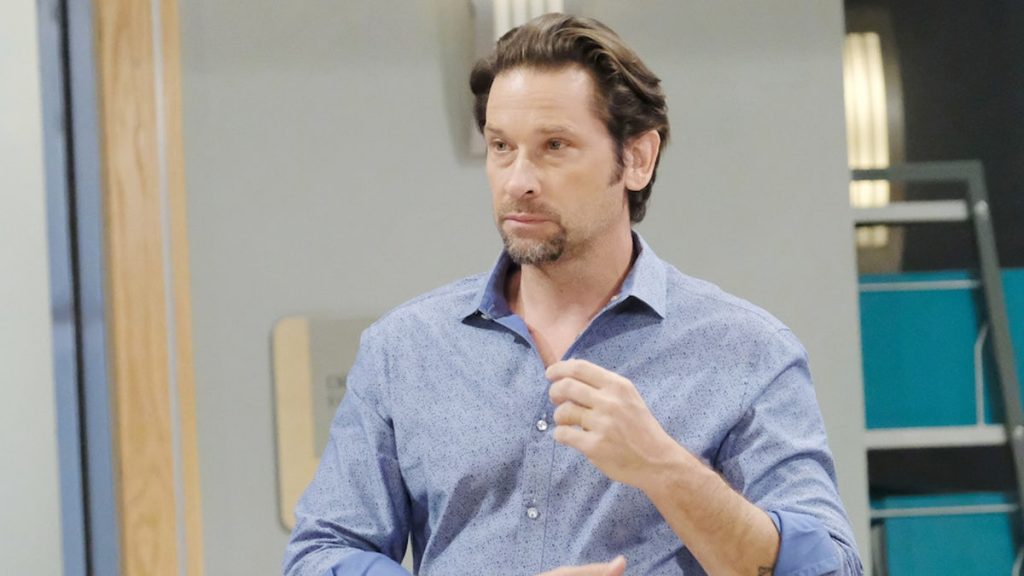 General Hospital (GH) spoilers tease that Elizabeth Baldwin (Rebecca Herbst) will continue to fight for her husband, Franco Baldwin (Roger Howarth) in the midst of a family torn apart!

The new General Hospital weekly promo video starts with Elizabeth talking to Julian Jerome (William DeVry) about Franco, and about his girlfriend, Kim Nero (Tamara Braun). She tells Julian that she is doing everything that she can to restore Franco’s memories, including talking to Scott Baldwin (Kin Shriner) about committing Franco to Shadybrook at least until Drew Cain (Billy Miller) could bring Dr. Andre Maddox (Anthony Montgomery) back to Port Charles to see if he can restore his memories or reverse the memory transfer process performed on him by Dr. Arthur Cabot (Time Winters).

However, as they are talking about Kim, Elizabeth tells Julian that she is afraid that she has feelings for her husband. Of course, Kim is not admitting it but it’s not really Franco she has the feelings for, it’s pre-2012 Drew’s memories and personality in Franco that she’s attracted to.

Well, they’re not in a tree, but Cameron Webber (William Lipton) and Trina Robinson (Sydney Mykayla) do experience TMI when they spot “Frankendrew” and Kim kissing in Oscar’s Meadow! Cameron will want to go rip Franco off Kim and give him a lecture on fidelity, especially to his mother Elizabeth, but he manages to restrain himself, undoubtedly with Trina’s help. Elizabeth is obviously correct in her suspicions that Kim is falling for “Frankendrew”!

Since Cameron saw the memory transfer take place, he was able to give Elizabeth an important message from Franco before it took place; his promise that he would come back, even though Franco knew what was going to happen to him through his knowledge of Drew’s original memory transfer from Jason Morgan (Steve Burton) when all that Drew remembers is the last five years of his own experiences and everything of Jason’s!

Elizabeth insists to Jason that Franco will come back, but Jason, who has seen firsthand what can happen with a memory transfer and knows that “Frankendrew” prefers to live in Drew’s pre-2012 memories, asks her what if he won’t? Of course, it’s not Franco that won’t want to, it’s Drew in him that won’t want to let Franco come back!

GH Spoilers – An Angry Cameron Has To Tell His Mother Something

In the last scene of the promo, as Elizabeth is getting ready to head out her front door, an angry Cameron stops her, saying there’s something he needs to tell her! This is undoubtedly the disturbing scene he and Trina witnessed between Kim and “Frankendrew” in Oscar’s Meadow and needing to warn her that the two indeed are acting romantic towards and with each other; although it’s not something Elizabeth wasn’t suspecting already and possibly expecting!

The Bold and the Beautiful Alum Ashley Jones Heads To Primetime

This Is How Kate Middleton Is Preparing Herself To Be Queen