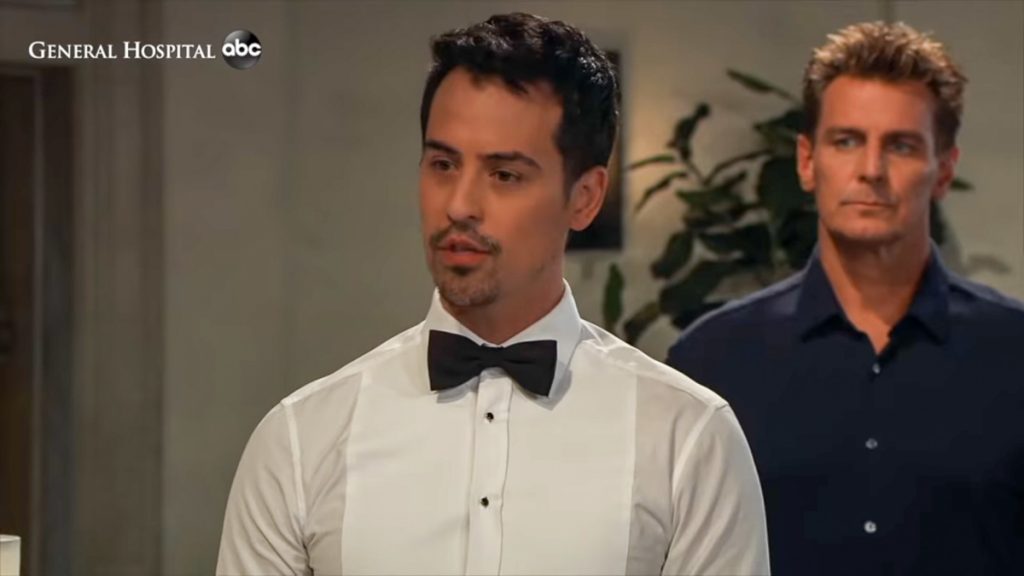 General Hospital spoilers tease that with the revelation that Nikolas Cassadine (Marcus Coloma) is still alive, and if Hayden Barnes (Rebecca Budig) is still legally married to him, where does this leave Dr. Hamilton Finn (Michael Easton) and his relationship to Violet Finn (Jophielle Love), his daughter with Hayden?

General Hospital viewers will recall that the first time Hayden contacted Finn, back last summer, she was in Rome. Finn turned her down about a meeting and went with Anna Devane (Finola Hughes) to hunt down Cassandra Pierce (Jessica Tuck). In Monday, November 4th’s episode it was revealed that Nikolas also lived in Rome and not only that, he and Hayden are still legally married! He referred to her as “his widow and his wife” to Jasper Jacks (Ingo Rademacher).

This explains why Hayden left Finn at the altar and took off; she must have been contacted by Nikolas! She couldn’t marry Finn if she was still legally married to Nikolas! Even if she did have him declared dead the declaration of death would become null and void if he returned alive, which he now has! Yet, Hayden recently confessed to Finn that she still loved him! Is she trying to play Nikolas because she wants his money? Nikolas also mentioned that Hayden stands to gain a huge inheritance if he can successfully find the codicil to Mikkos Cassadine’s (John Colicos) will, which disinherits Valentin Cassadine (James Patrick Stuart)! Finn should stick with Anna – it’s obvious that Hayden hasn’t changed a bit! Does Nikolas even know about Violet?

GH Spoilers – Hamilton Finn Is Torn Between Knowing Hayden Still Loves Him, Having A Daughter With Her, And Not Knowing How To Face Anna Devane When She Returns!

Hamilton Finn is torn between knowing Hayden still loves him (we think she was telling the truth about that, anyway) and realizing he may still love her as well, even though he felt he was ready to commit to Anna and go through with marriage to her. Yet, unbeknownst to him, Hayden is still legally married to Nikolas and Nikolas is alive and in Port Charles staying at Jax’s house! Even if he and Anna were to break up, there is the same conundrum of Hayden not being able to legally commit because she’s still married to Nikolas, and she will have to stay married to him until he gives her the money he promised, which he won’t be able to do until he has access to it again!

It sounds like Hayden is leading both Finn and Nikolas along, and all because she wants the money owed her by Nikolas! True, she does now have her daughter to think of and with Nikolas’ money she can support Violet well, but why haven’t they divorced if she has known he has been alive possibly since last summer? She isn’t that desperate – Jax did give her a good paying job at Aurora Media, and just because Jax and Hayden are still helping Nikolas with finding the codicil, it doesn’t mean that when they do that Jax will just walk away from Aurora and fire Hayden! After all, he has a daughter too that he wants to stay close to!