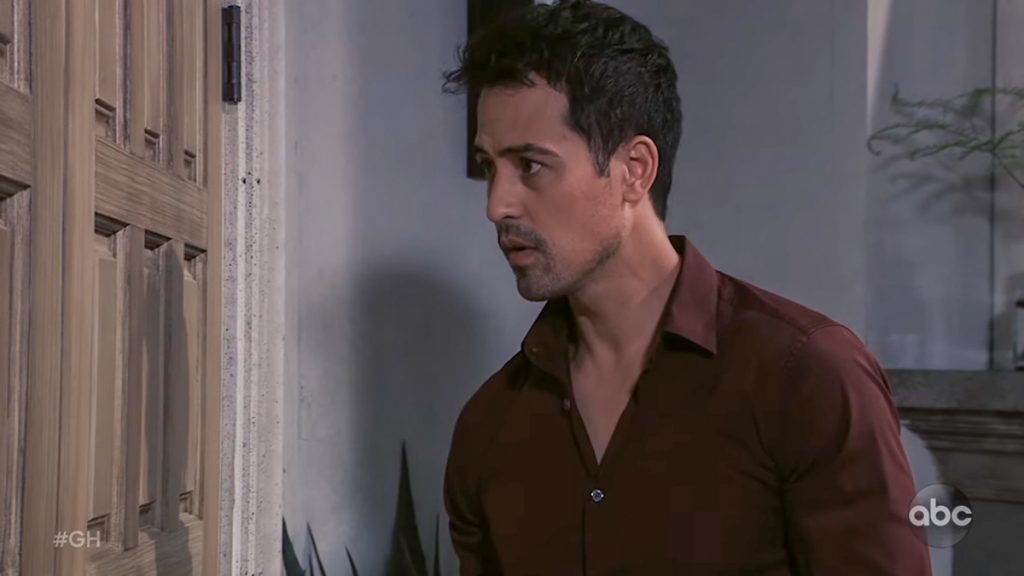 Welcome to your Monday, November 4th General Hospital (GH) recap! We begin our day at the Metro Court where Valentin Cassadine (James Patrick Stuart) and Nina Reeves (Cynthia Watros) are trying to calm down from the big fight at the Halloween party. Curtis Ashford (Donnel Turner) and Jordan Ashford (Brianne Nicole Henry) walk up to Nina and ask how she is doing without Valentin?

At Charlie’s Pub, Micheal Corinthos (Chad Duell) and Sasha Gilmore (Sofia Mattsson) discuss what happened at the Halloween party. She thanks Michael for getting Nina and Valentin to back off persecuting her.

Also at Charlie’s Pub, Maxie Jones (Kirsten Storms) and Peter August (Wes Ramsey) are celebrating her birthday. They begin kissing as Liesl Obrecht (Kathleen Gati) approaches and tells the love birds to “get a room.” Liesl says she has not seen her grandson in a while and tries to explain her actions regarding Sasha’s paternity.

On the Corinthos patio, Brad Cooper (Parry Shen) continues to defend himself against the affair accusations. His husband Lucas Jones (Ryan Carnes) continues to yell about the nude photos he found on Brad’s phone. Lucas is furious and continues to yell at him, so Brad says he will text the person back to confirm it was a mistake.

Brad continues to say he would never cheat on him, he swears on Wiley’s life.

Laura Spencer (Genie Francis) asks Julian Jerome (William DeVry) if he’s okay after they put Ava away in Shadybrooke. He says no as he pours them both a stiff drink. Laura says missing Nikolas is as painful today as it was two years ago when he “died”. Julian wonders why Ava Jerome (Maura West) would suddenly start seeing Nikolas now? Julian’s text beeps and its Brad asking about the nude pics. Laura tells Julian that she battled her own mental demons many years ago.

At Jasper Jax’s (Ingo Rademacher) house, the newly alive Nikolas Cassadine (Marcus Coloma) walks in and asks if they are happy to see him. Hayden Barnes (Rebecca Budig) says that he was supposed to stay in hiding until they find the codicil. Hayden tells Nikolas that he needs to go back into hiding.

Jax flashes back to Rome, to Nikolas asking for his help to get revenge against Valentin. Jax tells Nikolas that Ava told his mother, Laura, that he is alive.

Liesl Obrecht continues to tell Maxie that she is sorry for her role in what happened and she I sno longer going to Switzerland. She says that Peter August was instrumental in getting her to stay in town, which surprises Maxie. Liesl asks Maxie if she thinks Nina would ever forgive her.

The cheers to whatever is coming next in her life, whether its in Port Charles or not. Liesl approaches their table and asks Sasha if she implicated her as well in the scheme. Sasha says she did not and all the blame for what happened is on her.

Michael asks Sasha she would want to work for ELQ, but she rejects the offer.

Curtis Ashford and Jordan Ashford are shocked to find that Nina Reeves is staying with Valentin Cassadine. Nina defends Valentin while Curtis again reiterates his shock and contempt.

Julian worries that Sonny is now going to try and take Avery away from Ava.

Lucas yells at Brad to leave and he storms out through the living room past a shocked Carly and Sonny.
Brad shows up at Julian’s place and tells him everything that is happening. Julian tells him that he set him up to look like a cheater and he tells him to get the hell out of town.

Liesl goes to Nina and asks for her forgiveness, Nina accepts the offer and they hug. Nina goes to the restroom and Liesl tells Valentin that he has more to lose than her if the truth ever comes out.

Hayden and Nikolas discuss and joke about the fact they are still technically married. Nikolas reiterates that as soon as they get the codicil, he will bring Valentin to his knees……flash to preview