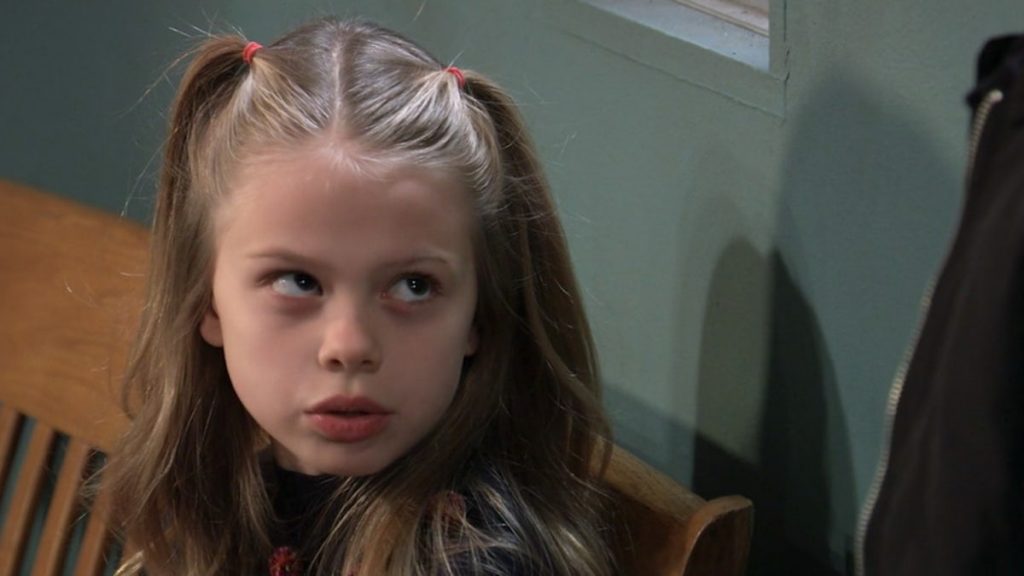 General Hospital viewers will recall Josslyn Jacks (Eden McCoy) at about the age Charlotte is now, when her mother, Carly Corinthos (Laura Wright) was involved with Franco Baldwin (Roger Howarth). Joss didn’t like Franco and showed it in no uncertain terms when she acted like a pint sized Ninja and kicked him practically off his feet in the shin! 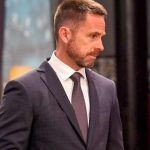 Carly and Lulu Spencer (Emme Rylan) are cousins, so Charlotte’s feistiness must be the Spencer in her! But one must remember she’s half Cassadine, too – and the person she becomes confrontational with may very well be the other half-Spencer half-Cassadine in the family – or families – Nikolas Cassadine (Marcus Coloma)! These two have the geneaologist’s nightmare of being niece and uncle on their Spencer side, and first cousins on their Cassadine side since Nikolas’ father was Valentin’s brother and Lulu is Nikolas’ little sister!

General Hospital viewers will recall the first time Charlotte saw Nikolas was on the pier, after being rescued from Cassandra Pierce (Jessica Tuck) who had kidnapped her. Then she saw him again in the Wyndemere Mansion, where he had come through the tunnels through the secret door next to the fireplace and demanded to know what he was doing in her living room!

Nikolas convinced her he was a bodyguard that her Papa hired to protect her, and although he undoubtedly has figured out she is his cousin on the Cassadine side, and that Valentin is her father, it is unclear if he knows Lulu is her mother. She bought the story hesitantly until she was looking at her mother’s phone and saw a photo of Nikolas in it! Viewers can expect this photo to come into play as Charlotte undoubtedly will ask Lulu who the man in the photo on her phone is. She had mentioned the man she saw at the pier to her grandmother, Laura Collins (Genie Francis) but didn’t describe him to her.

Valentin Cassadine (James Patrick Stuart) obviously doesn’t know about the secret tunnel in and out of the mansion, although it is surprising that Liesl Obrecht (Kathleen Gati) hasn’t told him about it. She herself has used it many times in the past and there may be more than one tunnel. She and Cesar Faison (Anders Hove) hid in them several years ago when Nikolas was “alive before” and Faison impersonated Duke Lavery (Ian Buchanan) while she impersonated Anna Devane (Finola Hughes) using lifelike rubber masks!

Laura must not know about the tunnels either, or she and Kevin Collins (Jon Lindstrom) would have used them to access Wyndemere and get the portrait of Helena Cassadine (Constance Towers). Other General Hospital spoilers for this same episode say Nina Reeves (Cynthia Watros) will be aghast; Nina came to town a couple of years before Nikolas “died”, and she would recognize him if she saw him! Will Nina and Charlotte see Nikolas inside the walls of Wyndemere again, Nina acting like she’d seen a ghost, and Charlotte confronting Nikolas and shouting at him for lying, because he’s not her bodyguard, he’s her uncle Nikolas?