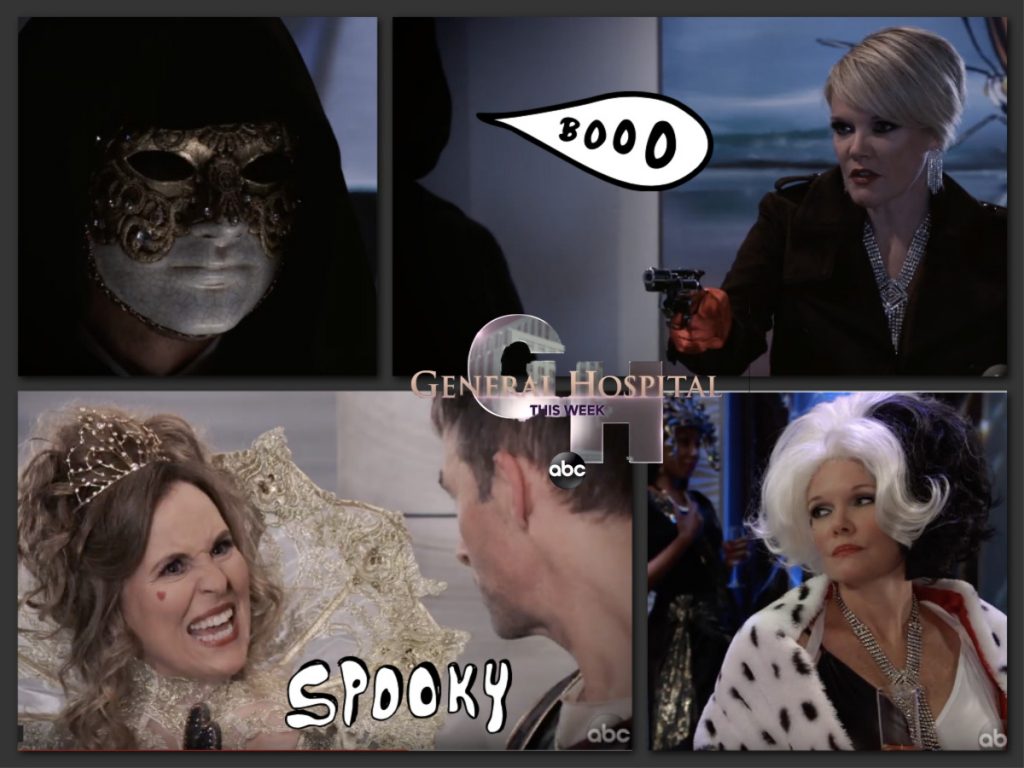 General Hospital spoilers tease, this Halloween week, beware – of things that go bump in the night and no one is safe – because it’s going to be a chiller!

The General Hospital Halloween week promo is full of tricks – and – treats – and things that go bump in the night, and one wonders what’s next! First, we see Lulu Spencer (Emme Rylan) and Dustin Phillips (Mark Lawson), dressed in 1880s garb check out the Port Charles High School Halloween Party aboard the Haunted Star. Dustin notes, so far, so good!

Then we see the Halloween party going on at the Metro Court, where Detective Harrison Chase (Josh Swickard), as Buzz Lightyear, takes Willow Tait (Katelyn MacMullen) as Jessie for a spin around the dance floor. Ava Jerome, (Maura West) as Cruella DeVil turns to sneer at Valentin Cassadine (James Patrick Stuart) as Marc Antony. Back at Ava’s gallery, someone pulls the sheet off of Helena Cassadine’s (Constance Towers) portrait and then lightning strikes!

Back at the Metro Court, Michael Corinthos (Chad Duell) also in costume with a sword, is distracted by something as he is not looking where he’s going and collides with Ava! Laura Collins (Genie Francis) who is dressed as Marie Antoinette, is startled as a masked man in a black hooded cloak that comes a little too close and she jumps! Elsewhere, someone approaches a desk in someone’s office and appears to be turning on a desk lamp, one of two on the desk.

Back at the Haunted Star, Cameron Webber (William Lipton) and Josslyn Jacks (Eden McCoy) are on the deck of the Haunted Star and obviously hear something intriguing as Cameron shushes Josslyn loudly! Then a shower door is shown and someone’s form can dimly be seen through it, as someone turns on the shower! Meanwhile, back to the masked man in the hooded cloak, he walks toward someone – or something!

Back at the party going on at the Metro Court, Valentin and Laura appear to be having an intense conversation as Laura notes that one wonders what’s next! Nina looks towards someone or something! Confrontations happen in the courthouse and at Charlie’s Pub, as Scott Baldwin (Kin Shriner) is obviously incensed with Kevin Collins’ (Jon Lindstrom) testimony which seemed to give more ammunition to the opposing counsel than it did him! It’s disorder in the court, as Scott slugs Kevin and knocks him off his feet! At Charlie’s Pub, Kim Nero (Tamara Braun) has left the courthouse and confronts Julian Jerome (William DeVry), her ex-boyfriend, and slugs him too!

GH Spoilers – Who Is That Masked Man?

The masked man in the black hooded cloak has made his way over to Ava’s art gallery, and perhaps he is the one who turned on the desk lamps and pulled the sheet off of Helena Cassadine’s portrait. Ava has left the Halloween party and changed back into her regular clothing and gone to the gallery, and surprises the masked man, who she points her gun at and demands him to take his mask off! Will he, and will it be someone she knows? Ava’s pretty jumpy these days, will he take a bullet?

The Bold and the Beautiful Spoilers: Brooke Puts Ridge In A Tough Spot – Makes Him Choose Between Wife And Son

General Hospital Rumors: Could Elizabeth Be Pregnant? Father To Be Franco Returns To Take His Life Back!