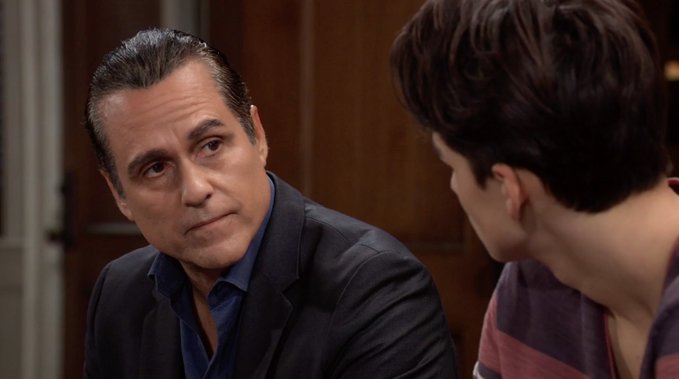 Welcome to your Wednesday, September 18th General Hospital (GH) recap! We begin our day outside Kim Nero’s (Tamara Braun) apartment where Elizabeth Webber (Rebecca Herbst) is about to knock when Kim opens the door slightly. She stands there listening, as Franco Baldwin (Roger Howarth) declares his love for Kim. The door slowly opens as Elizabeth watches them kissing.

At Kelly’s Diner, Josslyn Jax (Eden McCoy) and Cameron Webber (William Lipton) are deciding on what to order. Cameron says he’s surprised she skipped volleyball practice to meet him for dinner.

Also at Kelly’s Diner, Dustin Phillips (Mark Lawson) calls Lulu Falconeri (Emme Rylan) who is at the Metro Court restaurant. He asks if she wants to get together this weekend, but hesitates and says he will need to text him. Maxie Jones (Kirsten Storms) overhears the call and wants to know every detail.

At the Metro Court bar, Sonny Corinthos (Maurice Bernard) meets up with Jason Morgan (Steve Burton) who has no new news about the Drew disappearance. Jason shows Sonny a sketch of the man who stabbed Andre Maddox (Anthony Montgomery.) Jason’s phone rings and its Shiloh Archer who says he has information for him.

Jason explains that there is an article on Shiloh in the Defender tomorrow.

At Kim Nero’s (Tamara Braun) penthouse, Elizabeth Webber (Rebecca Herbst) walks in on her and Frankendrew kissing. She sees the ankle monitor is gone and she overheard that he is leaving Port Charles. Franco says the best solution to the situation is for him to just leave and he tells Kim a time to meet him.

Elizabeth says they need to talk right now and she realizes that they slept together. Kim defends vehemently what they did and that Franco really is Drew. Liz slaps the snot out of Kim and says that she is crazy and delusional. Kim continues to defend him and say Franco is now Drew and she needs to face reality.

Maxie Jones (Kirsten Storms) tells Lulu she should take it slowly with dating and wade in slowly. Lulu admits that her and Dustin went beyond kissing and have already had sex.

Lulu says it happened on the Haunted Star, but her mother Laura and Curtis caught them.

Josslyn Jax (Eden McCoy) continues to lament that mourning Oscar and going to school is too difficult right now. Josslyn then asks Cameron how he is doing and he admits that the Franco situation is very upsetting. Josslyn goes inside to place her order and her new teacher Dustin Phillips says hello.

Franco sees Cameron outside of Kelly’s and explains that he is going to leave Port Charles.

General Hospital Recap – Peter August is still up to no good

At the Port Charles Pier, Peter August (Wes Ramsey) hands the man from the sketch an envelope. The man says this isn’t the agreed upon fee and Peter tells him he did not finish “the job.” Peter gets upset that the goon did not finish off Andre Maddox and tells him to leave.

At the prison, Shiloh Archer (Coby Ryan McLaughlin) has called Jason and says he may be interested in his Defender article that was greenlit by Peter August. At the jail, Peter August shows up and Shiloh says he has put him on Jason’s “radar.” Shiloh threatens to expose Peter again if he does not get him out of prison.

Jason comes over to Maxie’s table and wants to know more about Peter’s history. Peter tells Shiloh that he is going to come up with an escape plan for him.

Elizabeth continues to argue with Kim and questions why she would screw Julian over? Kim throws Liz out and Kim leaves Julian a goodbye voicemail and letter.

At the pier, Peter tells his goon to “take care” of Shiloh Archer – aka kill him.

Franco shows up at the pier meet up point and Kim shows up with her luggage. Suddenly two men and take off with Franco as Kim tries to stop them ….flash to preview