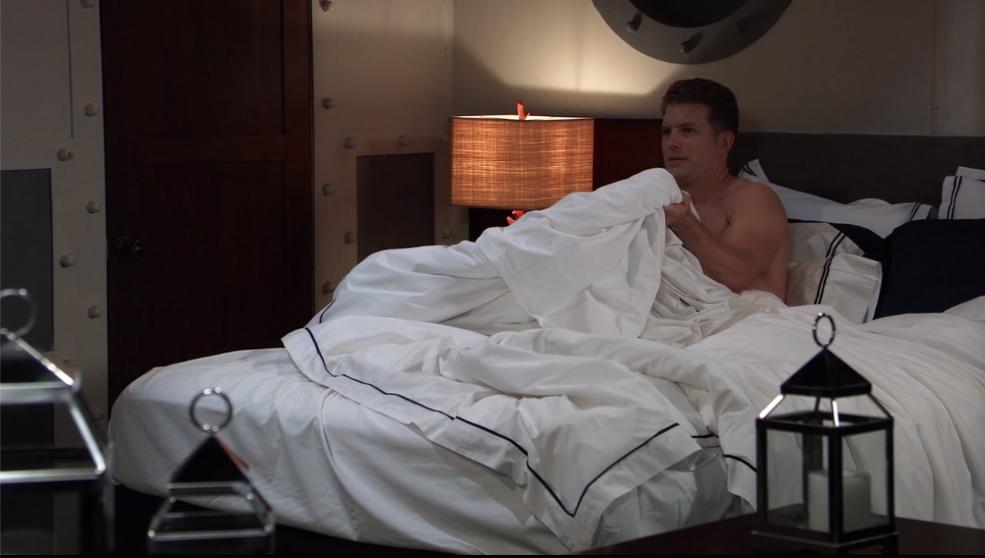 General Hospital spoilers tease that Dustin Phillips, (Mark Lawson) Lulu Spencer’s (Emme Rylan) may be too good to be true! He may not be the burglar she was looking for, but there seems to definitely be something in his life or in his past life that he is worried about! Here’s what you need to know.

As General Hospital viewers will recall from Monday, September 16th’s episode, Curtis Ashford (Donnell Turner) and Laura Collins (Genie Francis) had interrupted Lulu and Dustin and caught them in bed making love. Or having just finished making love, for the first time with one another. It was embarrassing for Laura and Lulu in particular, although Dustin could be seen trying to stifle a laugh at Lulu being so flustered and hurriedly dressing! However, when Dustin came out having dressed, he was noticeably nervous when he found out Curtis was not only a private investigator, but a good friend of the family! It would seem that Dustin is maybe a little too good to be true. Right?

The fact that Dustin was nervous when he found out Curtis was a private investigator doesn’t necessarily mean there is anything absolutely horrible in his past, or anything he’s hiding in his present. But then again, it could! Maybe he is the “Lovelorn Burglar” as the perpetrator could be called who sets up women for dates online and then stands them up while he burglarizes their homes. But it’s doubtful. Dustin showed up for the first online date so he couldn’t have been over burglarizing a house at the same time! However, like Willow Tait (Katelyn MacMullen) he is a teacher and if there is anything in his past that could have involved a crime against children and he changed his identity to become a teacher, that could be something that not only the school system, but Lulu in particular since she has two small children should be worried about! Many child predators choose occupations where they will come in contact with children, including high school age children, and seem like perfectly normal people! That would be horrible, but if Dustin has an unsavory past it’s doubtful that a child molestation story is what they have in mind, they did one with Franco Baldwin’s (Roger Howarth) past not that long ago!

General Hospital Spoilers – Dustin Phillips Could Have Either A Crime In His Past He Doesn’t Want To Jeopardize His Teaching Job With, Or He Could Be Undercover Himself!

It’s possible that Dustin could have some kind of crime in his past that he doesn’t want to come out because it could jeopardize his teaching job so a private investigator being a good friend of Lulu’s family might shake him up a little bit! He could even be in witness protection and doesn’t want anyone dredging up his past for a very good reason! He could even be undercover himself on some WSB or FBI mission, although placing him as a high school teacher would be a doubtful cover for those kinds of investigations! Whatever the reason is, Dustin did look shook up when he found out about Curtis; Curtis, however was focused on Lulu so he didn’t pick up on it!