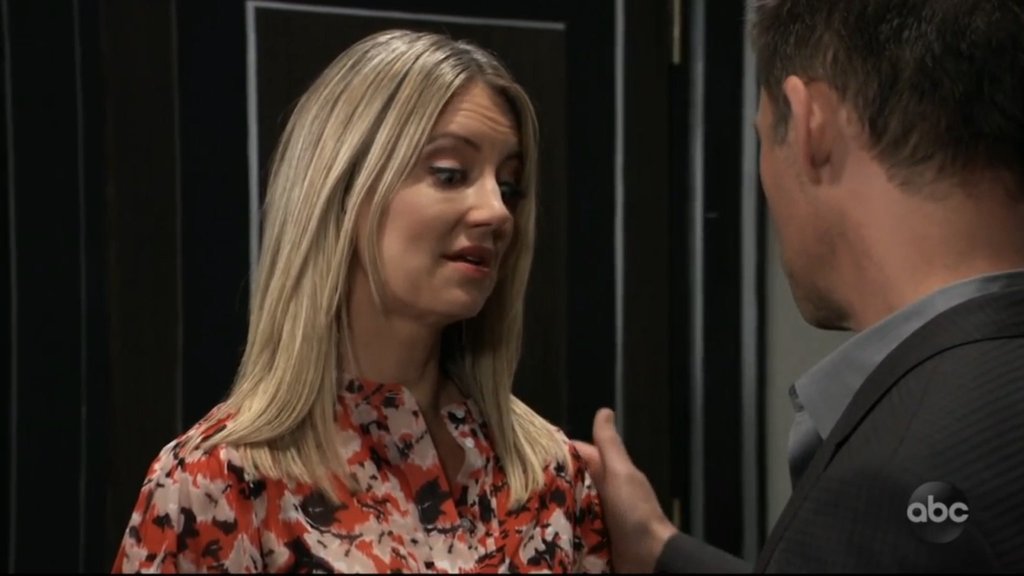 Welcome to your Thursday September 12th General Hospital (GH) recap! We begin our day at the Corinthos mansion, where Jasper Jax (Ingo Rademacher) has stopped by to see his ex-wife Carly Corinthos (Laura Wright) about their daughter. They are upset she left school early and is now not returning texts.

At Charlie’s Pub, Dev Cerci (Ashton Arbab) tells Josslyn Jax (Eden McCoy) that her mom is trying to reach her. Dev tells her they need to go and Josslyn says she wants to stay.

Also at Charlie’s Pub, Ava Jerome (Maura West) is talking to her brother Julian Jerome (William DeVry) about selling her penthouse. Ava says she should have killed Ryan when she had the chance, as Julian receives a photo text of Michael, Brad and Wiley.

Nina tells Valentin that she wished Sonny had agreed to “take care” of Cassandra. Valentin says they need to focus on their wedding and not worrying about Cassandra.

In the hallway, Liesl tells Sasha that she needs to keep the truth a secret so as to not hurt Nina. Michael sees them talking and walks over to help with Sasha.

General Hospital Spoilers: Nina And Valentin’s Wedding Nightmare — Who Will Stop The Ceremony?

Laura Spencer (Genie Francis) meets Curtis Ashford (Donnell Turner) with an embrace, they are going to discuss Helena Cassadine. Laura says Helena loathed her and blamed her for the death of her son Stavros.

Laura asks Curtis what is going and why he needs information, which he says he cannot divulge. She mentions the curse Helena put on her and Luke at their wedding 30 years ago. Curtis says the information he’s looking for could help destroy Valentin.

At Charlie’s Pub, Sonny Corinthos (Maurice Bernard) sits down with Josslyn and says her mom is very angry with her. At the Corinthos mansion, Carly says her, Jax, and Sonny need to come to an agreement about Josslyn. Jax brings up again his idea of Josslyn splitting time between his home and hers.

Carly gets upset by his idea and says she needs to come home to a place with two parents. Josslyn and Sonny come home, so Jax leaves when prompted by Sonny.

Ava jokes to Julian that Sonny has 6 kids and one on the way and they all adore him no matter how awful he is. Meanwhile her own daughter wasn’t even speaking to her when she passed. Julian asks Ava if she is going to be okay when him and Kim leave for NYC. She stubbornly says she has herself to take care of.

Ava says Kim will have grief no matter where they move to and she does not believe in fresh starts.

Carly and Josslyn sit outside and tells her that not returning texts is completely unacceptable. Their lives are dangerous and they have a lot of enemies.

Liesl shows up at Charlie’s Pub and sits down next to Ava. She makes a comment about “real parents” versus adopted parents which upsets Julian.

Dev tells Sonny that he does not think Jax likes him, but Sonny reassures him he is not a problem. Liesl passes out drunk and Julian contemplates stabbing her, but stops himself.

Jax tells Nina and Valentin that Drew most likely died in a plane crash. We get a flash to a woman’s hand looking at Nina and Valentin’s photo on her phone – she smashes the phone………..flash to preview!

Watch General Hospital weekdays on ABC to find out what will happen!