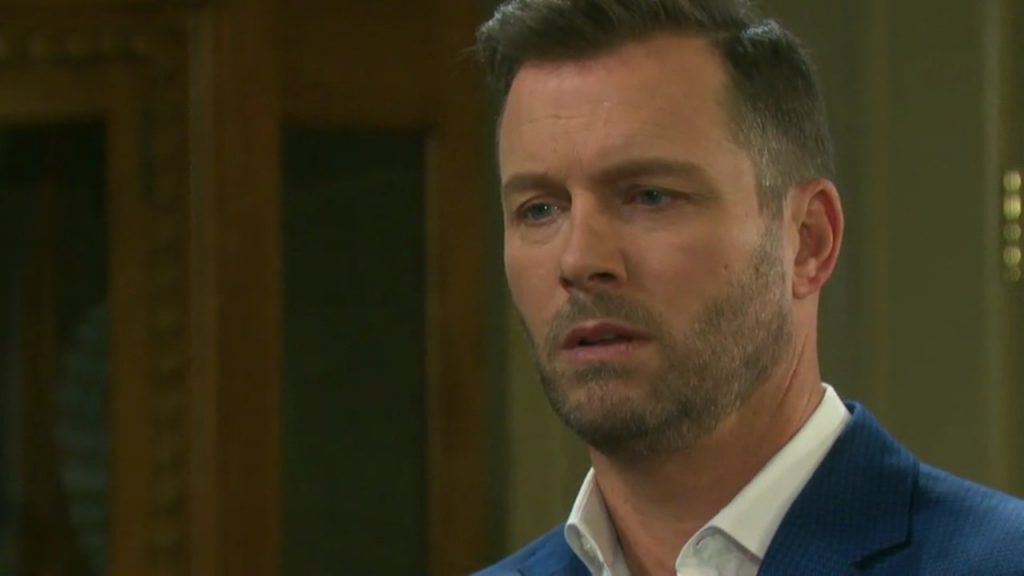 Brady Black (Eric Martsolf) fights temptation as Kristen DiMera (Stacy Haiduk) continues to try and weave her seductive web around him! Obsession doesn’t nearly describe how Kristen is about Brady; it’s much closer to desperation mixed with psychosis.

What made her think posing as Nicole Walker (Adrienne Zucker) would win his heart anyway? Just because he may have once loved her, doesn’t mean there is any spark left there. But Kristen remains determined to prove to him that he’s wrong about nothing remaining for her inside of him! Before it’s over with, she might just drive him back to the bottle as well!

Meanwhile, back at the Kiriakis mansion, Xander Kiriakis (Paul Telfer) tells Sarah Horton (Linsey Godfrey) he knows about her pregnancy, and that she is really in a pickle here (and maybe into the pickles soon, along with some ice cream)!

He wasn’t trying to snoop, he just happened to check the garbage can in her bedroom in case she had lost her lunch in it again and the paper was crumpled up in such a manner that he could see some of the contents, and he was too concerned to resist taking a peek. Xander really does love Sarah and will do anything to help her through this crisis!

Elsewhere, Eve Donovan Deveraux (Kassie DePaiva) tries to get Vivian Alamain (Robin Strasser) to talk to her son Stefan DiMera (Brandon Barash) for her. One would think that Eve could handle getting an appointment with Stefan herself, but she talks to his mother instead.

Eve has a past history of marrying wealthy men for their money, but is she so out of the loop that she doesn’t know that Stefan is married to Gabi Hernandez (Camila Banus)? She also tried to ingratiate herself into the Kiriakis family but Brady did a background check and made sure that was a no go; perhaps now she’s going to try with the DiMeras and hone in on Vivian not liking Gabi for a wife for her son!

Then, Vivian sneaks into Salem University Hospital with the intention of finishing what she thought she already had; or should that be who? She shot Kate Roberts DiMera (Lauren Koslow) and even buried, her, and she still managed to claw her way out of the grave and into the hospital!

Stefan confiscated Vivian’s gun, “Belinda” so she won’t be able to use her on Kate, besides, a gun would be too noisy without a silencer. Vivian might get lucky and be able to get to Kate before the anesthesia wears off after her surgery. Vivian did quite a bit of damage to Kate’s internal organs, so it may be touch and go for Kate anyway, but Vivian will want to make sure she’s really dead this time!

Days Of Our Lives Spoilers Next Week: John’s In Big Trouble, Belle Tries To Keep Him…

Days Of Our Lives Spoilers Next Week: Tripp Discovers Ava Is Alive, Rages Over Being…