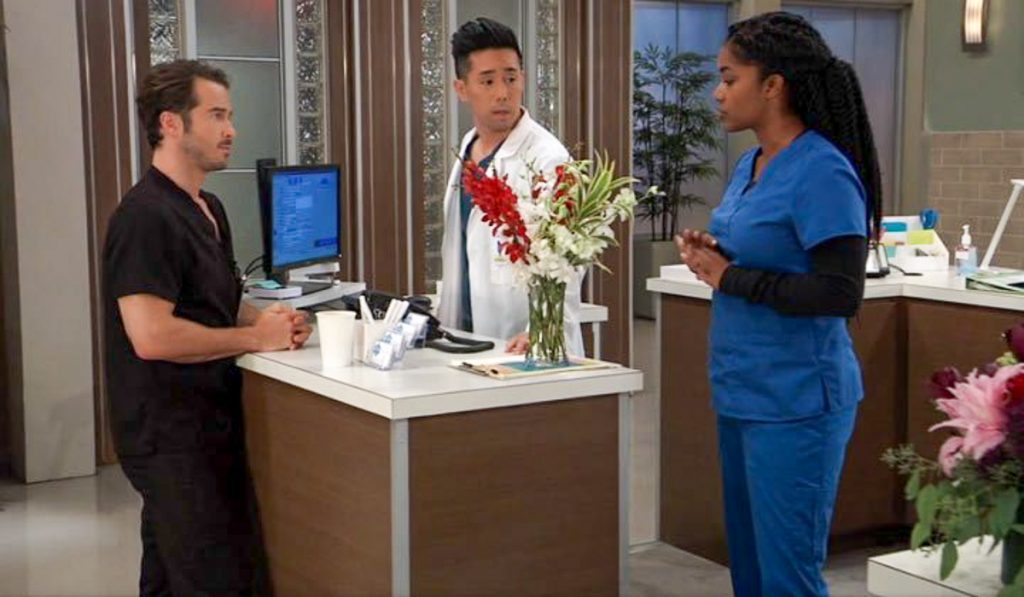 Welcome to your Monday October 28th General Hospital (GH) recap! We begin our day at the Port Charles boxing gym, where Michael Corinthos (Chad Duell) is sparring with a boxing bag. Harrison Chase (Josh Swickard) enters and asks if he needs a sparring partner.

At Charlie’s Pub, Willow Tate (Katelyn MacMullen) is with baby Wiley when Julian Jerome (William DeVry) comes by to say hi. Julian asks what the heck she is doing with his grandson.

At the therapist office. Brad Cooper (Parry Shen) nervously awaits his appointment with his husband Lucas Spencer (Ryan Carnes). Lucas asks why he is so nervous as Dr Byrne (Joe Flanigan) ushers them into his office.

Outside Kelly’s, Laura Spencer (Genie Francis) runs into Sonny Corinthos (Maurice Bernard) and asks how baby Donna is. He says she is great, but he needs her help in regards to Scott Baldwin (Kin Shriner). Laura says she feels sympathy for ‘Frankendrew” , but her heart breaks for Elizabeth and Scott.

Sonny says he feels bad for Elizabeth as well and Laura asks him to have compassion for Scott. 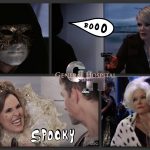 At the courthouse, the judge makes her ruling in regards to Franco Baldwin (Roger Howarth). She rules in favor of Franco due to his sound mind, which shocks Elizabeth Webber (Rebecca Herbst) and Scott Baldwin (Kin Shriner). Cameron Webber (William Lipton) has an outburst that is reprimanded by the judge as she says Franco is free to go.

Franco wonders what his next step is as he thanks his lawyer Martin Grey (Michael E Knight). Scott is pissed at the outcome and punches Kevin Collins (Jon Lindstrom) , who is the reason Franco is free.

At Kelly’s, Alexis Davis’s (Nancy Lee Grahn) trainer Kendra says she is the most advanced and improved of all her students. Alexis thanks her for her help and for the incredible health supplement (which we know is poison of some sort). Alexis brings up that she goes to a therapist, which surprises Kendra.

Sonny shows up at Kelly’s and goes to talk to Alexis about Sam. Alexis says she is trying not to freak out about her daughter, but Sonny assures her that Diane Miller is on top of it.

In the boxing ring, Michael Corinthos (Chad Duell) and Harrison Chase (Josh Swickard) spar as he says the stress of the Sasha situation has gotten to him. Chase says that falling in love is what has happened to Michael.

At Charlie’s Pub, Julian Jerome (William DeVry) questions why Willow has Tate and she says she is babysitting. He says that she seems like a strange choice for a sitter. Julian figures out that they are at therapy and asks Willow for the number to the office.

In Dr Byrne’s office, Lucas relays that Brad deflects from important discussions, Brad accuses him of being too pushy. Lucas brings up the subtle lying and the mysterious flowers that showed up at the hospital. He brings up Nelle and how strange it is that Brad is still friends with her.
Dr Byrne says they are at least making progress by talking to each other.

Laura walks into the courthouse and is furious that Scott has punched her husband. Brad and Lucas show up at Charlie’s after the appointment to get Wiley. Julian tells Brad privately to delete any messages with Obrecht and to change his password.

Cameron goes to the boxing gym with Trina to let off some steam after the trial. He starts crying and they embrace as Sonny looks on.

Elizabeth tells Franco that she will only let him go if he says goodbye to her family. Scott shows up at the gym and tells Sonny that he “owes him and hes come to collect”…….flash to preview

So stay tuned to General Hospital weekdays on ABC to find out if was a friend or foe! And don’t forget to check back right here regularly for all your General Hosptial news, information and spoilers!