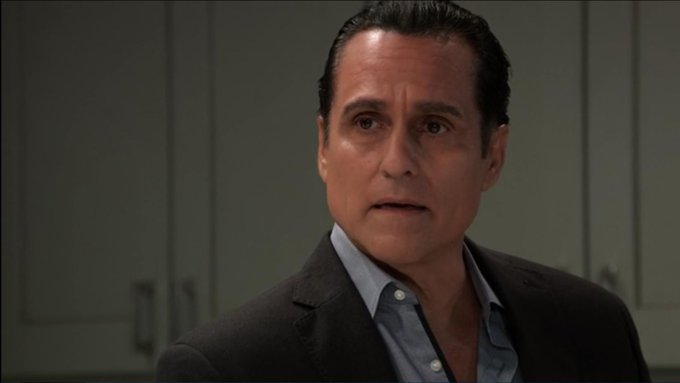 General Hospital spoilers tease that Tuesday, September 24 will be another exciting day full of drama and suspense for the ABC soap opera fans!

Jasper Jacks (Ingo Rademacher) has a warning for Sonny Corinthos (Maurice Benard); he is most certainly continuing the conversation from Monday’s episode when he, Sonny, and Carly Corinthos (Laura Wright) were discussing Josslyn Jacks’ (Eden McCoy) misunderstanding over a brochure for a boarding school she found in the Corinthos kitchen. Joss had misunderstood it was intended for her when Carly was looking at it for Dev Cerci (Ashton Arbab). Joss was very upset over it, and Jax warns Sonny that if things get worse, he will be coming to him for answers!

Meanwhile, Joss is talking to her mother Carly. Her father, Jax, had been talking to her about moving in with him and out of the Corinthos house and had planned to stay overnight with her dad as of Monday’s episode. Carly is probably trying to talk her out of moving in with her dad, and Joss has other ideas, saying “maybe it wouldn’t be such a bad idea for me!” Perhaps it wouldn’t; a change of scenery might help her move on from her grief, and it’s not like Jax is taking her back to Australia with him!

Maxie Jones (Kirsten Storms) looks adoringly up at Peter August (Wes Ramsey) and promises him she’s ready to go on with him! It sounds like she’s trying to tell him marriage is on her mind, and it couldn’t come at a worse time for Peter, with Shiloh Archer (Coby Ryan McLaughlin) continuing to blackmail him over a past that he thought he’d left behind!

At General Hospital, Brad Cooper (Parry Shen) is very upset upon finding out from his husband, Dr. Lucas Jones (Ryan Carnes) that their adopted baby, Wiley Cooper-Jones (Erik and Theodore Olson) has been kidnapped by Shiloh in the process of stealing Bobbie Spencer’s (Jaclyn Zeman) car! He starts to confess his misdeeds and will continue to in Wednesday’s episode, telling Lucas that this wouldn’t be happening if it hadn’t been for him!

Detective Harrison Chase (Josh Swickard) has bad news, as he has to tell his girlfriend, Willow Tait (Katelyn MacMullen) that Wiley is in the hands of Shiloh and no one knows where they are! Willow will more than likely be devastated and fearful, but Chase will reassure her that he won’t let Shiloh win! He won’t let him!

Still at General Hospital after rescuing Bobbie and bringing her in, Jason Morgan (Steve Burton) tries to reach Sam McCall (Kelly Monaco). Viewers will recall from Monday’s episode that he and Sam had switched cell phones and she was going to recharge his, which was running down; but before she got the chance a call came in from Dev, needing rescue on the Haunted Star! She had found Dev knocked out on the floor, and now is hostage on the ship along with Dev and Wiley!

General Hospital Spoilers – Shiloh Archer Has Too Many Hostages

Shiloh confronts Sam, holding Wiley, and Dev, who has come back to after Shiloh knocked him out with a gun. Shiloh says he has too many hostages and that puts Dev in extreme danger since he is the one who’s expendable! Trouble is, Shiloh doesn’t realize what he’s dealing with; Dev isn’t just some dumb kid in the wrong place at the wrong time, he’s dealt with worse than Shiloh or just as bad in Turkey!