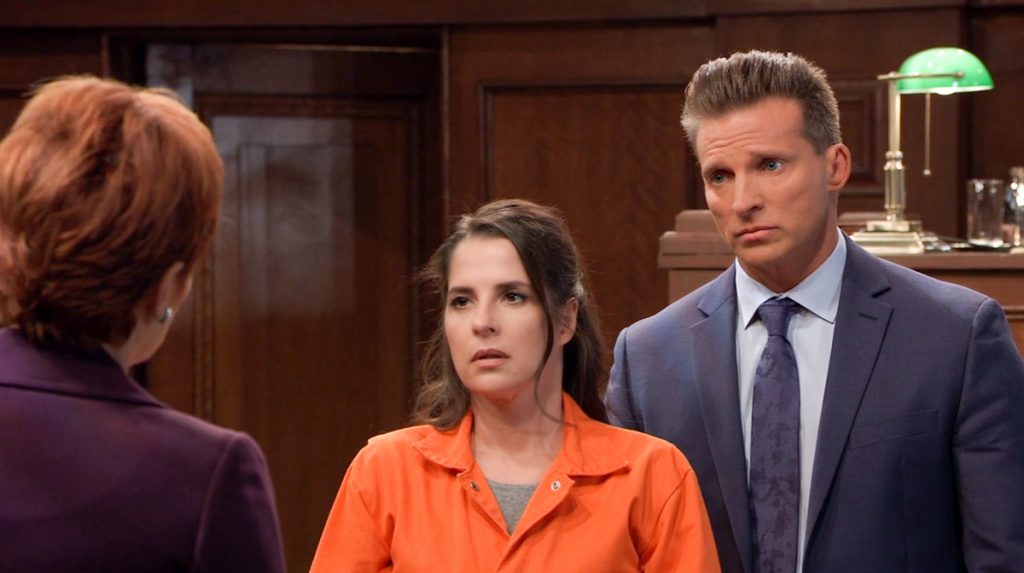 Welcome to your Monday November 18th General Hospital (GH) recap! We begin our day at the Courthouse where Jason Morgan (Steve Burton) is about to testify in Sam McCall’s (Kelly Monaco) bench trial. Diane Miller (Carolyn Hennessy) approaches him and Spinelli (Bradford Anderson) and says to put on straight faces, there is risk all around.

At General Hospital (GH) Lucas Jones (Ryan Carnes) and Brad Cooper (Parry Shen) walk into an elevator, Brad thanks him for lunch. Lucas tells Brad that he has cut all ties with his father Julian Jerome (William DeVry).

Also at General Hospital (GH) , Elizabeth Webber (Rebecca Herbst) asks Hamilton Finn (Michael Easton) about the tea party. Finn says hes so happy to have Violet in his life and Liz says she also heard that Anna is back.

General Hospital Spoilers – Alexis Davis may have been poisoned

In her hospital room, Alexis Davis (Nancy Lee Grahn) questions TJ Ashford (Tajh Bellow) when he says she may have rat poison in her system. TJ says hes not totally sure, but its looking that way. Liz and Finn come in to check on her and hear TJ’s theory about the poisoning.

Finn tells Alexis that she is going to be okay, but they need to know who or why she was poisoned.

At Julian’s bar, he deletes Kim Nero’s (Tamara Braun) contact info from his phone. Julian Jerome (William DeVry) daydreams about Kim when a loud customer asks him for a drink. Brad shows up at Charlie’s and Julian tells him to get the hell out. Brad says he will give him another chance with Lucas and his grandchild.

Brad threatens Julian and Julian threatens him right back. The woman from the bar appears to be eavesdropping while playing on her phone.

At her packed up penthouse, Kim Nero (Tamara Braun) has her suitcases ready when Frankendrew (Roger Howarth) arrives. She asks if hes ready to starts their new life in San Diego and he says actually he is not leaving Port Charles. Kim is shocked and wonders why he can’t leave?

Franco says he wants to be with her, but hes changed his mind and wants to get the procedure reversed. Kim starts crying and begging him not to go through with it.

Brad says he did not know that Lucas spoke to Julian, who continued to say Brad is being shady again. Brad leaves and Liesl Obrecht (Kathleen Gati) approaches Lucas and says her Britta has been in contact with him. Lucas goes off on Liesl and she says Brad is probably still lying to him.

Liesl says she may just have to let the real truth come out about Wiley’s father.

At the courthouse, the judge enters and the prosecutor is missing, Diane asks for all charges to be dropped. The prosecutor rushes in and says he was late because he was busy interviewing people who are defending Shiloh.

Sam relays what happened on the night of her kidnapping and Shiloh’s subsequent death.

Kim is shocked and disappointed that Franco has decided to stay. Kim says she still must go, without Oscar there is nothing left for her in Port Charles.

Julian kicks everyone out of the bar and the mysterious woman refuses to leave as she sips on her drink.

Brad runs into Lucas and Liesl arguing, she says he better leave her alone or else. Lucas wonders what else he is lying about.

Alexis is told by TJ she will recover from the poisoning, which she texts to Kendra. Franco shows up at General Hospital and tells Elizabeth he needs to talk to her. At the courthouse, the judge has made a ruling and asks all to rise ……flash to preview!

Some important family drama is coming up on General Hosptial, so stay tuned weekdays on ABC. And don’t forget to check back right here regularly for all your General Hosptial news, information and spoilers!