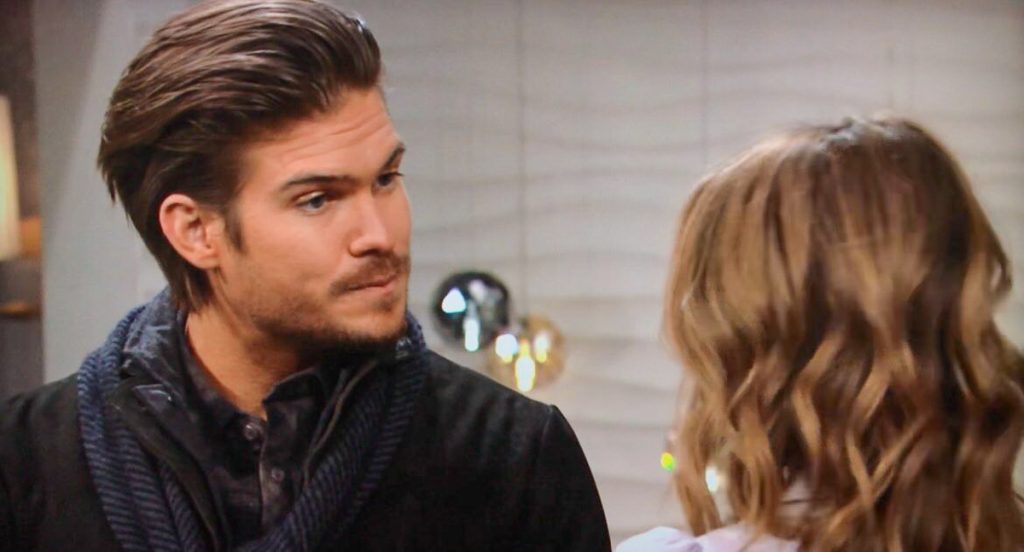 The Young and the Restless (Y&R) spoilers for Tuesday, November 19, tease that some shockers and shakeups are brewing. We should note that impeachment hearings coverage will continue, so Y&R may be preempted on Tuesday. If that happens, the show will make an announcement and most likely push the episode back to a later date. It’s just something we want to make sure you’re aware of.

Chance just wants to speak with Abby, but he takes a phone call soon after. Phyllis eavesdrops and learns Chance intends to visit the Maldives. After Abby wishes Nate Hastings (Sean Dominic) luck at his hearing, Phyllis tells her about Chance’s upcoming trip. She feels like they need to be brought in the loop if this involves Simon and Chelsea.

Abby thinks they could just grill Chelsea about this, but Phyllis won’t think that’ll work. They can’t trust a word Chelsea says. Abby meets up with Chance, who wants her help running a security system scan. He figured Abby would be more receptive to the idea than Phyllis.

Abby lets Chance run the scan, which determines that the software was updated overnight. Chance smells a cover-up and notes that someone could’ve had a backdoor to their wi-fi. He explains that the person responsible may have access to all their customers’ information. Abby’s outraged and shoots Phyllis a glare across the room.

At Crimson Lights, Summer Newman (Hunter King) gets brought up to speed on Ashley Abbott’s (Eileen Davidson) offer for Theo Vanderway (Tyler Johnson). She’d miss Theo not being around, but she has no intention of holding him back. Summer thinks they could try a long-distance relationship. Theo’s concerned about changing if he accepts this offer, but Summer’s supportive. She just wants Theo to fill her in once he’s made his choice.

Meanwhile, Amanda Sinclair (Mishael Morgan) helps Nate do some last-minute hearing prep. Lola Abbott (Sasha Calle) steps over to join them eventually. Theo overhears Lola talking about how happy she is with Kyle Abbott (Michael Mealor), which leaves him looking blue. Afterward, Theo asks what Lola would think of him accepting an Abbott offer. Lola feels like Theo can chase opportunities and still be who he really is.

At Society, Kyle tells his troubles to Mariah Copeland (Camryn Grimes) and gets some advice. Mariah thinks it sounds like Billy Abbott’s (Jason Thompson) trying to make an effort. She feels Billy deserves the benefit of the doubt.

After the conversation shifts to Theo, Kyle suggests Summer understands his concerns about Theo. Mariah feels like Kyle’s distracted by all the cousin drama and can’t see what’s right in front of him. She doesn’t want Kyle to wake up one day and realize his marriage is ruined. Mariah also believes Theo deserves another chance. She reflects on getting one of those and hopes Kyle can do the same for Theo.

At home later, Kyle relaxes with Lola and lets her know he’s going to stop being so paranoid. He doesn’t want to be a jerk and intends to give Theo a shot at being the guy he wants. Back with Summer, she visits Phyllis at the Grand Phoenix and updates her on Theo’s job offer in Paris. Phyllis rants that Kyle and Lola should be leaving instead. She’s irked when Summer pipes up to defend her ex.

After Summer heads for the exit, Abby approaches Phyllis and insists she’s learned something very interesting about her. As for Theo, he gives Ashley a call and declares that he’s in. Back at the coffeehouse, Amanda’s hopeful about the outcome of Nate’s hearing. She believes Victor Newman (Eric Braeden) was quite persuasive.

Nate’s impressed by how passionately Amanda defended him and will never forget it. He ultimately gets a call and learns he can keep his medical license. Nate pulls Amanda into a warm embrace as they celebrate.

The Young and the Restless spoilers say Amanda and Nate will grow even closer in the coming weeks, so they may be poised for a romance. We’ll keep you posted as other Y&R news and rumors emerge. Stay tuned to see what’s else is coming up on the CBS soap.