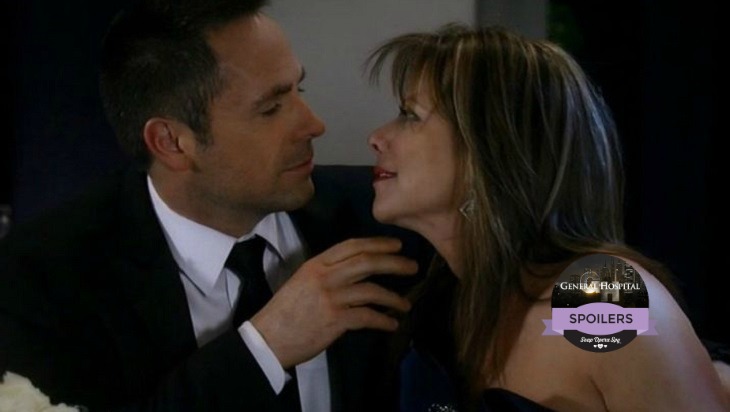 ‘General Hospital’s’ “Julexis” — Julian Jerome (William deVry) and Alexis Davis (Nancy Lee Grahn) have announced the date for their wedding! It will be aired on February 19th, 22nd, and 23rd… and as we know from the past, GH weddings very rarely go off without some sort of ‘hitch’ (pardon the pun).

This reporter’s take is this: WHAT A WAY TO START SWEEPS MONTH! WOO HOO! I’ve found myself rooting for these two for most of last year and I especially loved their Thanksgiving family episode which included Ava Jerome (Maura West), Baby Avery, Baby Leo, and Baby-Mama, Olivia Falconeri (Lisa LoCicero).

Related: Sam Confronts Franco About Jason – Jake Rages at His Parents – Sabrina in Labor and at Risk – Anna and Robert Storm the Cabin

In a recent interview with TV Insider’s Michael Logan, Nancy stated that the role of Julian was not originally brought in to be with Alexis; the role was meant to be a territorial rival for Sonny Corinthos (Maurice Benard) –  Julian wanted to bring Sonny’s territories back into the Jerome family holdings.

But, as luck would have it, and once the fans saw the sparks igniting between Julian and Alexis (again)… it became apparent that these two had the makings of a huge “supercouple.”  If given the chance and the fan response was promising… “Julexis” could rival the popularity of other supercouples like Anna & Robert, or Frisco & Felicia. The pairing of Julian and Alexis has been all that Executive Producer Frank Valentini and Executive Nathan Varni could have hoped for… and more!

Related: Which GH Actor Or Actress Do You Think Should Win An Emmy!

When Julian was first introduced to Port Charles, Julian wasn’t “Julian”. He was then publisher, Derek Wells, and his true identity was discovered on accident by Connie Falconeri (Kelly Sullivan). This discovery was the ultimate end of Connie. She was really killed by Ava Jerome, who ended up framing A.J. Quatermaine, Jr. (Sean Kanan) for Connie’s murder while drunk.

William DeVry and Nancy Lee Grahn have phenomenal on-screen chemistry! Their scenes sizzle and leave us, the fans, breathless and wanting more.

So, mark your calendars for February 19, 22, and 23… and settle in. I think we’re in for a very bumpy ride as “Sweeps” month starts off with wedding bells!