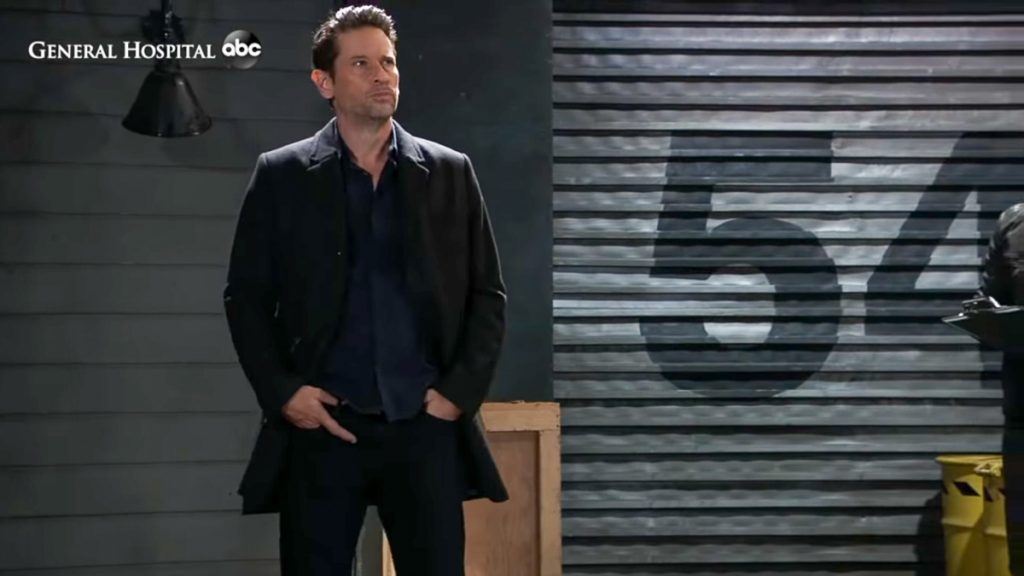 General Hospital spoilers tease that there will be five key takeaways for General Hospital fans to look for in this week’s GH. Bear in mind that your show may be totally or partially pre-empted on Tuesday, Wednesday, and Thursday of this week due to the Trump impeachment hearings, and ABC will either push episodes out a day or show them in their entirety on abc.com after 8:00 PM EST.

Relations between Brad Cooper, (Parry Shen) Lucas Jones, (Ryan Carnes) and Julian Jerome (William DeVry) will worsen this week on GH. Brad will confront Julian, which never leads to anything good, and by the end of the week Julian will look into Brad’s schedule, considering putting out a hit on him! Lucas will also find himself confronting Brad once again over discrepancies or lies! Compounding Brad’s precarious situation will be Liesl Obrecht (Kathleen Gati) who is weighing the pros and cons of busting him over the baby swap situation!

Dr. Hamilton Finn (Michael Easton), Hayden Barnes (Rebecca Budig), and Anna Devane (Finola Hughes) will work things out among themselves over the co-parenting of Violet Barnes (Jophielle Love). At the beginning of the week, Finn tells Elizabeth Baldwin, (Rebecca Herbst) Hayden’s half-sister, that he and Anna have a lot to sort out. Finn is committed to being a part of Violet’s life, and his brother Detective Harrison Chase (Josh Swickard) will chastise him over not telling him sooner that he has a niece! Meanwhile, Anna is suspicious of Hayden and doesn’t trust her.

General Hospital viewers will recall from Friday’s episode that Franco Baldwin, (Roger Howarth) through his implanted memories and personality that have been making him think he’s Drew Cain (Billy Miller) decided that Franco deserves his life back, and told Jason Morgan (Steve Burton) that since his body didn’t belong to Drew, and that Franco had been his hero as a child, that Franco deserved his life back. He had first gone to Kim Nero’s (Tamara Braun) apartment where she was all excited for the two to take off to San Diego together to start their new life, but it sounds like he will have some bad news for her. Elizabeth will be stunned when she finds out, and Kim will cross paths with Hayden when she gets ready to leave Port Charles by herself. Franco will also pay Monica Quartermaine a visit.

Sam McCall’s (Kelly Monaco) bench trial for the murder of Shiloh Archer (Coby Ryan McLaughlin) takes place this week, and although Attorney Diane Miller (Carolyn Hennesy) will defend her masterfully, and Jason will make a statement, Sam will be deeply shaken by the time it concludes! This does not bode well for her freedom, and Jason will turn to Damian Spinelli (Bradford Anderson) for help.

Jordan and Curtis Ashford (Briana Nicole Henry, Donnell Turner) get a welcome visitor when “Auntie” Stella Henry (Vernee Watson) returns home from her trip around the world with her mysterious newfound relative. She will be just in time to see some changes in her patient Mike Corbin (Max Gail) who may be going into the final stages of Alzheimer’s disease, as Carly Corinthos (Laura Wright) notices a difference in him. She will also be in time for her grandson TJ Ashford (Tajh Bellow) to seek her approval for his upcoming proposal to Molly Lansing-Davis (Haley Pullos).

That’s all for this week’s Five Key Takeaways from General Hospital. Stay tuned to the show, and keep checking General Hospital spoilers frequently for all the latest news, updates and developments!