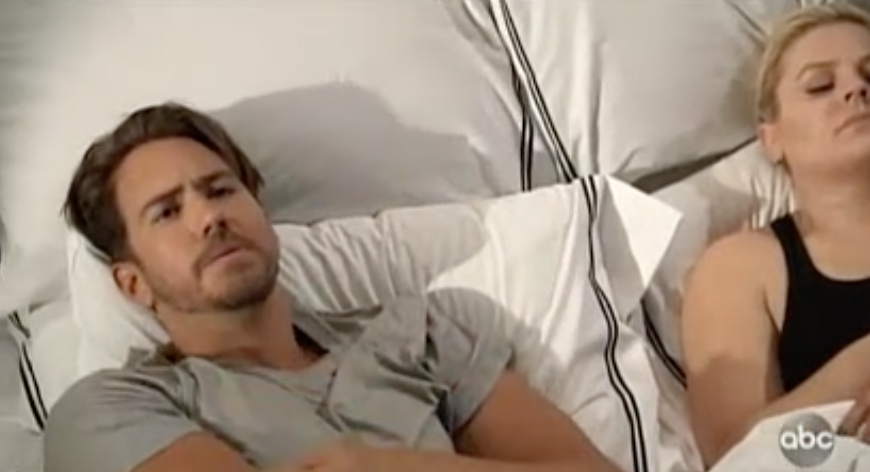 Welcome to your Friday August 30th General Hospital (GH) recap! We begin our day at Charlie’s Pub, where Ava Jerome (Maura West) comes into the bar and her brother Julian Jerome (William DeVry) is just waking up. Ava says she has a letter from Ryan Chamberlain (Jon Lindstrom).

Also at the Metro Court restaurant, Felicia Jones (Kristina Wagner) and Mac Scorpio (John York) are having breakfast with their grandson James. Mac says she has something to tell her, Jordan is back as commissioner. Felicia says that’s great cause now he can join her working at the Floating Rib.

General Hospital Spoilers – Peter August thinks about his past and future

In bed with Maxie Jones (Kirsten Storms), Peter August (Wes Ramsey) thinks about his conversation with Shiloh. Maxie wakes up and tells Peter that she loves him, but is wondering what is wrong. Peter says that he’s responsible for everything that happened to Drew and Jason.

Peter admits he was working with Helena all along to kidnap Drew and take down his father Faison.

At Oscar’s memorial site, Franco Baldwin (Roger Howarth) runs into his ‘brother” Jason Morgan (Steve Burton). Franco tells Jason that the memory transfer was a savior as he wants nothing to do with Franco’s past. Jason says a lot of people love Franco and he won’t stand by and let him hurt those people.

Franco says its better if he just takes off and starts his life anew somewhere else.

At the Port Charles precinct, Harrison Chase (Josh Swickard) has Shiloh Archer (Coby Ryan McLaughlin) in the holding room. He harasses Chase about Wiley and wonders how the baby is doing. Alexis Davis (Nancy lee Grahn) walks in and Shiloh says she’s just the person he wanted to see.
Shiloh asks Alexis how Kristina is doing?

At General Hospital (GH), Elizabeth Webber (Rebecca Herbst) runs into Kim Nero (Tamara Braun). She says she is just the person she was hoping to see. Kim says she has been busy preparing to leave Port Charles and Liz wonders if she is avoiding her.

Kim apologizes for not getting back to her and explains that Franco keeps asking about Oscar. Kim says she is going to spend the rest of her life with Julian and hopes Franco gets cured.

At Charlie’s Pub, Ava Jerome (Maura West) explains to Julian that she thought visiting Ryan would be a good thing. Ava reads the letter to Julian and he wonders if she is thinking too much about him.

Sam says she’s worried about Shiloh coming after her if he ever got out of jail. Kristina says that Shiloh does not have power over her anymore.

Felicia is excited that Mac can work at the Floating Rib with her again. Mac says that’s not the case he was offered a full-time position as chief of detectives. Felicia is ecstatic and tells him to accept the position.

Scott Baldwin (Kin Shriner) visits Liz and tells her about trying to get his son back. Liz says they can go to court and say he is not in his right mind. They can put him in Shadybrook til Dr Maddox can fix him.

Alexis meets with her friend Kendra who is going to create a new life plan for her.

Mac tells Felicia he was confused by her answer and she says she’s very happy for him. She is redoing the Floating Rib and increasing the revenue every day.

Peter wakes up and realizes he never admitted to Maxie his true past, it was a dream.

Franco runs into Kim and continues to discuss his past as if he is actually Drew. Franco holds her hand and tells Kim he is leaving town……flash to preview!